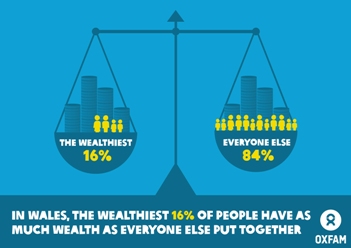 Once the festivities die down, our thoughts – as tradition dictates – turn to new beginnings and resolutions. Whether it’s learning a new language, being a better baker or watching fewer box-sets, the start of a brand new year inevitably rekindles hopes of a brighter, shinier version of ourselves.

With 2016 an Assembly Election year, perhaps we should also create some New Year Resolutions for this great country. What could bring about a brighter, shinier future for Wales?

In Even It Up: A Blueprint for Change, published today (13 January 2016), we set out clear policy calls for the next Welsh Government, policy calls that would help make Wales the great nation we know it can be. Oxfam Cymru’s New Year Resolution for Wales is to secure real implementation of the policy calls contained within our Blueprint over the next four years.

And there isn’t a moment to spare. Here in Wales, 16% of the population own as much wealth as everyone else put together. The extent of low pay has not changed in a decade and 23% of Welsh households are living in relative poverty. How should we tackle this stubborn problem? We believe that creating a brand new Deputy Minister role within the Finance Department of the next Welsh
Government would help even it up in Wales. The new Deputy Minister would have sole responsibility for tackling economic inequality and poverty, and be able to take focused steps towards making Wales a Living Wage Nation, and get Welsh workers the pay they deserve.

62% of workers in the UK earning less than the Living Wage- as defined by the Living Wage Foundation, currently £8.25 an hour – are women.This must change. Women need access to decent work and fair pay: Wales will be the richer for it.

To be a great nation we believe that Wales should also be aware of its place and impact in the world. Currently Wales exceeds the safe limits for CO2 consumption by a massive 410%.- how did we get here? We need to limit our emissions and produce an energy strategy that helps us move towards using clean, renewable energy, consigning fossil fuels to the past.

Playing our part on the world stage also means welcoming refugees and asylum seekers that, through no fault of their own, can no longer stay in their home countries. There are more refugees in the world today than at the end of World War ll; from Syria alone 4 million seek refuge. To resettle our Fair Share, and begin our journey to become the first Nation of Sanctuary, we should welcome at least 724 Syrian refugees by the end of 2016.

We’ll be officially launching our report Even it Up: A Blueprint for Change tonight, at the Wales Millennium Centre, outlining how the next Welsh Government can even it up and create a brighter and shinier future for us all.

So here’s to Wales in 2016. Here’s to getting the next Welsh Government to take these issues on board, roll up their sleeves, and start tackling them. We intend on doing everything we can to make that happen. And you can take our word for it – this is one New Year Resolution we promise to keep.

Read our Blueprint in full here: https://bitly.com/BlueprintForChange, and check out our short film which sets out the Blueprint’s main calls.

If you’ve got any feedback, we’d love to hear from you. Send us an email on oxfamcymru@oxfam.org.uk.