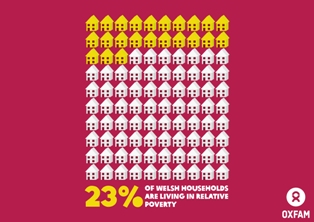 Now, the political parties in Wales have published their policy ideas for Wales.  So, what could it mean for poverty and economic inequality in Wales, and have the policy calls in our Blueprint for Change made it into any of the manifestos?

Firstly, it seems there is plenty of agreement about the need to tackle low pay in Wales, which echoes our call for Wales to become a Living Wage Nation.  Labour, Liberal Democrats and Plaid Cymru all make reference to the Living Wage (£9.40 am hour in London and £8.25 outside of London, based on the cost of living) and the importance of using procurement to drive up low pay in the public sector.  The Welsh Conservatives want to ensure the new National Living Wage is properly implemented.

The Liberal Democrats have pledged to use an assets-based approach in programmes designed to tackle poverty. This approach involves looking at what people already have in their lives, the things they can build on, rather than focus on what they haven’t got. An assets-based approach was used by Oxfam Cymru in our Livelihoods Project that helped over 1,000 people across Wales. The Conservatives also want to enable communities to use the skills
that they have to tackle poverty.

Childcare is a big issue for families – and the lack of affordable or flexible childcare can trap many women in poverty.  A point that was raised by many attendees at our event held on International Women’s Day.  We’re very pleased to see that there seems to be a general consensus in Wales that it’s time for us to tackle childcare issues head on. The Green Party wants to create a free, universal early education and childcare service, while Plaid suggest free full-time nursery places for all
three year olds by the end of the Assembly term.  Labour wants to increase provision of services in the school holidays, in particular through lunch clubs, to ensure all children are getting a healthy meal, while the Conservatives would treble the hours of free childcare provided for 3-4 year olds, and Lib Dems would introduce childcare for children under three.

UKIP want to shift a number of responsibilities from Cardiff Bay to local councils in Wales.  This would give local politicians greater say in designed local services, which could be used to tackle poverty at a council area level.

Another of the calls in our Blueprint for Change was for the next Welsh Government to commit to an infrastructure budget to undertake a whole-house refit for a third of existing Welsh housing stock by 2020, so we are very excited to see that there is general agreement on the need to retrofit housing stock to help tackle fuel poverty – at the same time reducing our carbon emissions.  The Conservatives plan to implement annual reviews of carbon emissions in Wales, to enable
improved monitoring against internationally agreed targets, and the Lib Dems would introduce a carbon budget.  The Green Party want to meet Wales’ entire electricity demand from renewable sources within Wales by 2030, and Plaid Cymru aim to do the same by 2035. Labour aim for Wales to be carbon neutral by 2020.

There is a whole section in our Blueprint for Change which looks at how Wales can do more to offer a warm welcome to refugees and asylum -seekers. Now, as the world faces the greatest refugee crisis since the end of World War Two, we are very pleased to see that there are commitments from the Conservatives, Green Party, Labour, Liberal Democrats and Plaid to do more to support refugees and asylum-seekers in Wales.

This is just a brief snapshot of some of the policies put forward – you can find out much more on the individual party websites.  It’s an exciting time for Wales as we look forward to the election on 5 May, and whatever the makeup of the next Welsh Government, we look forward to working with them to continue to tackle poverty and economic inequality at home and abroad.