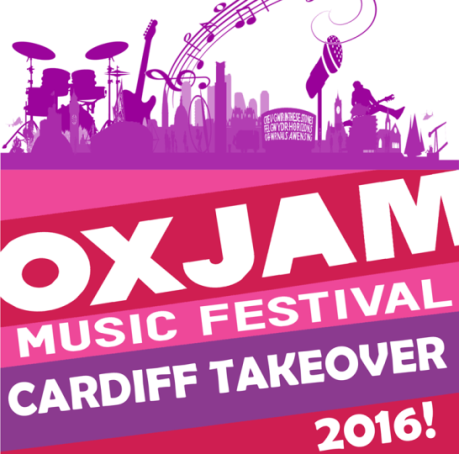 Welsh music fans are in for a treat this weekend as Wales’ capital city is taken over by Oxjam – Oxfam’s annual music festival.

The Oxjam Cardiff Takeover is part of the wider Oxjam music festival which will see hundreds of gigs take place across the UK this month. Since it started ten years ago, Oxjam has raised more than £2.8 million, enough to provide clean water to 2.8 million people.

Cardiff has supported Oxjam since 2006 with gigs, fundraising events, buskathons and tea parties across the city. This year will be no different as a whole array of bands and artists get ready to perform as part of an epic day of live music – the Oxjam Cardiff Takeover.

Gigs and performances will take place in various locations across the city including the Urban Tap House and The Full Moon, featuring performers such as The People and The Poet, Violent Hearts, Rum Puppets, Thee Manatees and Cardiff singer-songwriter, Siôn Russell Jones.

“I’m really excited to be performing at the Oxjam Cardiff Takeover this weekend,” Says Siôn, whose music has been played on BBC Radio 1, BBC Radio 2 and BBC 6 Music.

“There’s a fantastic line up of bands and artist, and you can enjoy it all for just £10. Not only will you get to experience some amazing live music, you’ll also be supporting Oxfam to tackle poverty across the world.  Now that’s money well spent.”

With one wristband music-lovers can access six live music venues on Saturday 15 October with all the action kicking off at 12.00pm.

“From alternative rock, to folk and dream pop – it’s set to be a jam-packed day of lively performances. We’re hoping to raise as much money as possible, all of which will help Oxfam in our attempt to eradicate world poverty in the next 15 years.”