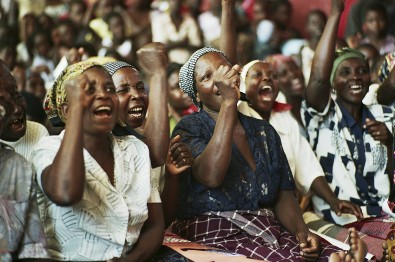 It’s a sobering fact that one in every three women worldwide is likely to suffer physical or sexual abuse at some point in her life.

Women face the threat of violence everyday; in the workplace, at home and in school, which damages women’s development, health and opportunities. It is a global crisis, and it’s a massive barrier to the campaign to end poverty in the world. On Friday 23 November, Oxfam will be taking part in 16 days of action to campaign to end violence against women and girls. From India to Guatemala, Oxfam are holding a variety of events including theatre productions, film screenings, competitions and classroom lessons.

Why is it important to tackle Violence Against Women (VAW)? It is a blatant violation of human rights, and it also enslaves women and girls into poverty, affecting their chances of getting a career, a healthy life and the power to lead their own lives. Violence and the threat of violence means that women have fewer opportunities, for example, the threat of violence can prevent women and girls from going to school, finding work, or even leaving the house. VAW is also a barrier to the mission of
ending poverty. It creates a vicious circle of violence leading to poverty, and poverty leading to violence. Women’s health is affected, with diseases, psychological and physical harm stopping women from working and contributing to society.

So how is Oxfam working to tackle the problem?  We campaign to change laws and policies that will help eliminate VAW from wider society. Stopping violence from happening at home is also a key part of Oxfam’s work. The problem often begins at home, so preventing the violence here is all important. Oxfam also supports services that support survivors of violence, as well as leading projects worldwide that empower women and girls to lead their own lives.

Encouragingly, in early 2015 the Welsh Government’s Violence against Women, Domestic Abuse and Sexual Violence Act came into force, which aims to improve Public Sector response in Wales to such abuse and violence. Looking ahead to the future and around to the wider world – especially in light of the Well-Being of Future Generations Act which should help Wales became a globally responsible nation – the Welsh Government could now take steps to support this work on a global stage. This could
be done by ensuring that all Welsh Government international partners, contacts and networks prioritise the elimination of violence against women, and uphold the same values in their work and organisations.

But what can we all do to stop violence against women in our everyday lives? Speaking out and challenging attitudes are important ways to help change beliefs. By discussing the issue openly, on social media, in public and at home, people’s understanding of the matter will improve, taking us one step closer to a world without violence against women. Why not take a look at our campaign video and share it on social media?

To learn more about Oxfam’s work to eliminate violence against women, visit: https://www.sayenoughtoviolence.org/