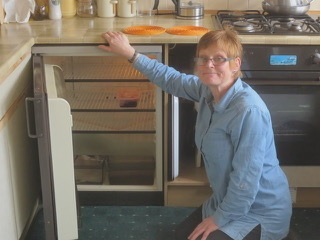 Rosemary Newman from Cardiff decided to live out of her cupboards throughout lent, to raise money for Oxfam.

Rosemary set herself the challenge of not buying any food and instead eating only what she had in her fridge, freezer and cupboards for the duration of six weeks.

In doing so, she has saved £400 and has donated the money to Oxfam.

“I’m proud of my idea,” says Rosemary, who wanted to show support for Oxfam. “It cost nothing and made me realise how we mostly take things for granted in our daily lives.

“What I have saved is a drop in the ocean, without any sacrifice made at all on my part. And I was able to defrost the freezer, which is brilliant!

“I wanted to show that I still support Oxfam and the amazing work they do around the world.”

“We are so grateful to Rosemary for her generous donation. It is thanks to Oxfam supporters such as Rosemary that we’re able to continue to support the world’s poorest people getting the help they need. Thank you – we can’t do it without you.”

Rosemary’s donation will go towards Oxfam’s Syria crisis appeal. Six years of brutal fighting have devastated Syria, a country that was a thriving, middle-income country before the start of the conflict in 2011.

More than 300,000 people have been killed, 11 million people have had to flee their homes and millions more are desperately in need of help.

For more information about Oxfam’s work in Syria visit: