Iranian artist brings human rights awareness campaign to the steps of the Senedd as Wales prepares to face Iran on the pitch at the FIFA World Cup.

As excitement across Wales builds for the Welsh football team’s first appearance in a football World Cup in 64 years, the event is also leading many people to reflect on questions about global human rights.

Not only is the World Cup being held in Qatar, amid concerns over the country’s treatment of workers as well as LGBTQI+ and other human rights concerns, but Wales are also in the same group as Iran in the first stage of the tournament. It is difficult to separate this match from the ongoing context of mass protests over gender inequality which have taken place in Iran over the past several weeks.

How to connect with and show solidarity with people in Iran during this time has been a key question for Sahar Saki, an award-winning Iranian artist and designer who is based in Cardiff. In response, Saki has organised a mural festival across the city to help raise awareness of the feminist revolution currently taking place in Iran.

Saki has now teamed up with the Welsh Centre for International Affairs, Oxfam Cymru, Wales Arts International and Arts Council of Wales for a joint event on the steps of the Senedd on Friday 25 November at noon. Held immediately following the Wales vs Iran game, the goal of this event is to give people in Wales a chance to show support and solidarity with those facing injustice in Iran, highlighting why football may be low down on the priority list of Iranian people right now.

Sahar Saki will also unveil a new mural at the event, funded by Wales Arts International, and has designed a poster that will later be displayed across the city. The poster will also made available to download for free for those who wish to show their solidarity by displaying it.

People are invited to join Sahar Saki and the collaborating organisations at the Senedd on Friday, with further information available on the event page.  You can also download and use this free Women Life Freedom poster in solidarity, created by Sahar Saki. 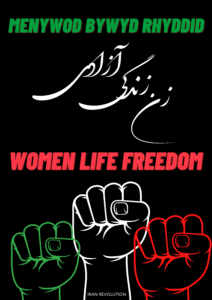