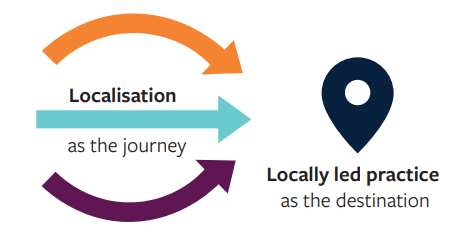 Localisation and locally-led practice are the latest buzzwords for something that the aid sector, and the local communities and organisations who work with it, has long tried to do. That is, to ensure that local people and communities have the power and agency to drive their own development. In the past, the “ownership agenda” has tried to do this in different ways; today, there are global and local movements, too, including “Shift the Power,” the Movement for Community Led Development, the Global Alliance for Communities, and many others.

But there has been real dissonance between rhetoric and action by external actors on localisation and locally-led practice. In the humanitarian sector, for instance, only 3.8% of total available funding was transferred directly to local/national actors (against a target of 25%); and only 8% of leadership positions in national coordination structures are occupied by local/national actors.

Now, global upheavals due to the Covid-19 pandemic, Black Lives Matter protests, and the renewed debates on decolonising development have provided renewed impetus for the sector to change.

Meanwhile the question of who counts as ‘local’ in the first place remains contested. Depending on who is using the term, ‘local’ in the Global South can mean communities or community members, organisations operating at the local level, organisations operating at the national level, local governments, national governments, and more.

In a recent report for ODI, in connection with Room 11 in the 17 Rooms Initiative, we highlight the existence of numerous positive examples of localisation and locally led practice, while unpacking the barriers and power imbalances that have stalled progress overall. The report was based on a rapid review of the literature and evidence, consultations with over 100 participants, and analysis of 28 existing models and approaches, shown in Figure 2 of the report below.

In this report, with an accompanying summary brief, we suggest that localisation is best understood as the journey towards locally led practice– i.e., what it would take to get us to get there.

Below are the key insights we’ve found in our analysis of this journey:

1.            Power shapes not just the destination but also the journey – Many in the aid sector agree on the ‘what’ of localisation: that is, to shift the power to local actors in the Global South. But there is less attention given to the ‘how’. We found that how localisation is designed and implemented is a process that is also steeped in power. For instance, it is possible for localisation efforts to be  top-down and take little account of the views and values of the Global South. That is why many efforts to localise in the past have fallen short of their ambitions. In localisation, the means matter just as much as the end.

2.            Localisation doesn’t only mean resources, it also includes agency and ways of being – Transferring resources is an important objective in itself, and as noted, we’ve done poorly thus far. But it is not enough. For localisation to truly shift power, local actors should retain decision-making power, in coming up with solutions to the problems they’ve identified. At the same time, genuine localisation also requires respect for local actors’ ways of being. We must not force local actors, especially indigenous or grassroots organisations, to “look” or operate like Global North actors. If localisation is to happen, it must be on their own terms.

3.            More data, evidence and research are needed to track progress towards locally led practice – Trying to understand why localisation has had limited progress has been difficult, because of the lack of data, evidence and research surrounding these issues. For instance, we know that one barrier to localisation is the perception of financial and other risks. But the evidence to support such perceptions is lacking. At the same time, without publicly-available and comparable funding data from Northern donors and INGOs, it is difficult to track how localisation is being implemented by donors, including the real extent of resource transfers to a wide range of local actors in the Global South.

4.            There are already a lot of good models out there – We examined a selection of 28 existing models and approaches of localisation that were selected to illustrate aspects of our localisation framework, including funding mechanisms, global networks, policy initiatives, and even measurement tools. We found that these efforts broadly focus on promoting locally led practice in four key ways: movement building and collective advocacy; shifting quality funding to the global South; knowledge creation and sharing; and supporting proximate leaders who work closely with communities. Many of these initiatives seek not only to transfer resources, but also to avoid encroachment on local actors’ agency and to respect their ways of being. Instead of reinventing the wheel or starting yet another project, those who are sincere in advancing localisation can instead learn from and accelerate these existing initiatives.

5.            Let Global South local actors lead – Localisation will only truly shift power if local actors are leading it in the first place. Localisation cannot be imposed. In this regard, Global North donors, intermediaries and NGOs need to have a difficult but necessary reflection on their future role: How can they be fit for purpose in the future, when Global South actors are taking the lead? Which areas do they need to step back from, and where do they need to accelerate change? Of course, Global South and local actors are diverse and are not a monolith – there are different perspectives and even power dynamics among them. But the point is that, for any discourse, campaign or effort promoting localisation to be effective, it must be led by the full diversity of Global South actors.

What do you think of our findings? You can read the full report here and the new summary brief here. If you have any ideas, suggestions or feedback to share, we’d love to hear from you – please sign up to keep in touch here.

6 Responses to “Are we there yet? Five key insights on localisation as a journey towards locally-led practice”