UN Economic Commission for Latin America and the Caribbean. Here is their description of current events in Europe, under the title ‘Various countries in the Eurozone need deep adjustments to achieve the established targets for fiscal sustainability’. The graph shows fiscal deficits on the left (anything to the left of the first vertical line is outside the Eurozone’s self-imposed limits) and total debt on the right (anything to the right of the second vertical line).

Here’s a rough translation of a paragraph from the ECLAC report (not available in English yet, but Spanish version here). ‘Fiscal challenges and public debt could lead to the industrialized economies entering into a lost decade…. political leaders will be doubly stressed: on one hand, by medium term demands and day to day electoral pressures, and on the other, by the global impacts of their decisions and the effects of these on the next elections.’ Meanwhile, Latin America’s economy is steaming ahead, with 4.7% growth predicted for this year (3.6% in per capita terms). Unemployment is falling, and more jobs are beign created in the formal sector (usually a sign of better wages and conditions). It’s not all rosy of course, but it sounds a lot more positive than Europe right now. It’s almost thirty years since Latin America entered its own debt crisis, and entered its own ‘lost decade’ of economic collapse, rising poverty and painful structural adjustment (often imposed by the IMF and World Bank in return for bail-outs) of the sort now being demanded of Greece and Ireland. Opinions differ about whether the subsequent recovery is because of, or in spite of, that ‘adjustment’. I wrote a book in the mid-90s, Silent Revolution: the Rise and Crisis of Market Economics in Latin America, (subsequently updated, cover below – looks a bit like Athens……), that strongly argued the latter case. Maybe time for a European version? [h/t Eduardo Caceres] 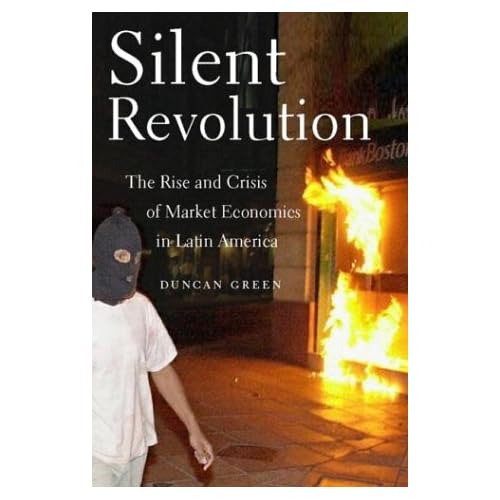 5 Responses to “Deja vu, role reversal or schadenfreude? The view of Europe's crisis from Latin America”