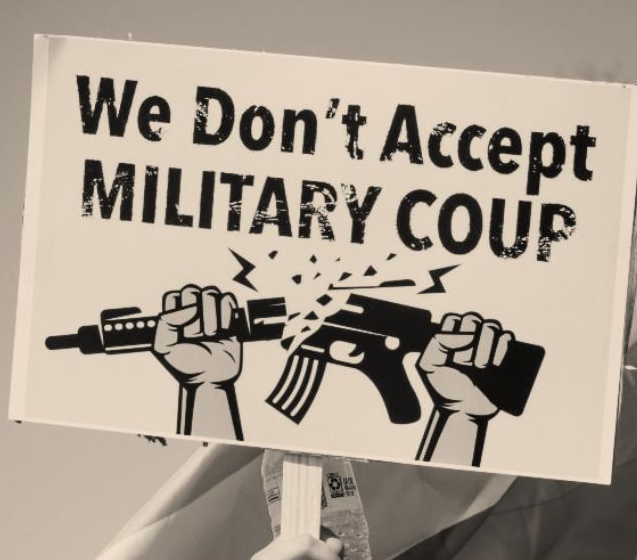 Guest post by a friend working on Myanmar, who for obvious reasons would prefer to remain anonymous

In a fast-moving violent crisis like the one in Myanmar, a lot of the most interesting analysis goes unpublished for obvious reasons – the safety of individuals or organizations. I’ve been working with a (suitably anonymous) national and international team on a series of papers based on consultations with Civil Society Organizations (CSOs) and Community-Based Organizations (CBOs) and providing guidance to development partners on what outsiders can do to help.

To whom are communities turning for support?

Communities are turning inward and relying even more on mutual support and self-reliance. Myanmar has a tradition of community self-help, with voluntary, faith and parahita (traditional self-help) groups having dominated pre-Nargis civil society. As a result of the coup, new groups have supplemented established support systems, including (1) Gen Z volunteers; (2) informal networks such as unions, CBOs and village leaders; and (3) groups or individuals no longer working for their previous organisations but continuing to offer informal support.

Communities are often purposefully boycotting already weak public services as part of their resistance. Many community members do not want to access support from the State Administration Council (SAC – the military government), while a substantial proportion of international nongovernmental organisations and CSO programmes are on hold or operating at reduced capacity.

CSOs also report that communities are less receptive to outside support due to an atmosphere of fear and mistrust, for example some fearing that it would put them under suspicion of supporting civil disobedience movements. Others distrust outsiders because they assume that any organisation that can continue operating must be engaging with the SAC. People are stuck between the implications of being seen as either SAC or National Union Government (NUG) supporters, both with potential consequences for their personal security.

How are CSOs Responding?

The impacts of the coup on CSOs focusing on service delivery and CBOs working at the local level include the following:

At the national and subnational levels, CSOs and service delivery organisations face different challenges based on their history and the focus of their organisations and activities. At this stage, the CSOs show three broad responses:

• Survivalist. Some CSOs are trying to maintain operations based from Yangon or other Bamar- majority areas. These organisations aim to (1) ensure their survival, (2) conduct useful short-term activities and (3) contribute to a return to democracy in the future. They do not actively engage with or conduct work that antagonises the SAC, but some are pragmatic about minimal levels of engagement if their survival demands it. Others may move below the SAC radar if forced to engage with them in the future.

• Transition to service delivery and community-based activities. Organisations that previously focused on research, advocacy and rights have transitioned to delivering services and support to communities. Some have also shifted to ‘intermediary roles’, coordinating and strengthening the delivery of support to local communities through local partner networks.

• Reform and resist. Other organisations align more strongly with the democracy movement. Some have proactively deregistered and restructured themselves. They now operate under the SAC radar and often under new names or as more informal groups of actors. Their leaders may be in hiding in Myanmar or have relocated to border areas or outside the country. Examples include several high-profile think tanks and research organisations.

Given these dynamics, we propose two key objectives with related strategies to underpin development partner support for civil society:

There is a tension between working with known and trusted local partners (‘core civil society’) and needing to adapt to changing contexts and work with new partners. Some existing partners will not survive or remain effective. The international community should look beyond core civil society and extend funding to parts of the sector that have not previously received support. It will be difficult to fund some of the less formal parts of civil society directly, requiring local intermediaries with strong existing community relationships. International actors should encourage the emergence of a more inclusive civil society – in particular, young, female and ethnic minority leaders who have risen to greater prominence in response to the coup – as well as informal groups, faith organisations, Ethnic Organizations and ethnic health organisations, and newly emerging civil society actors such as Gen Z-led groups.

What does this mean for how development partners should adapt the operational aspects of the funding cycle (i.e. accessing funds, disbursement, reporting and closing funding)?

Practical guidance is really important for sustaining civil society through the here-and-now of this uncertain and unpredictable period, but the analysis also suggests that the international community needs – already – to be strategically thinking through big picture support to civil society as part of a future beyond the current military regime – and that presents even bigger challenges in Myanmar, as it will for other unpredictable settings where governance is compromised in such a violent way.

There’s plenty more guidance to support decision making behind these headlines so if you would like a copy of the papers, please get in touch via FP2P.

14 Responses to “How can Outsiders support Civil Society in coup-torn Myanmar?”