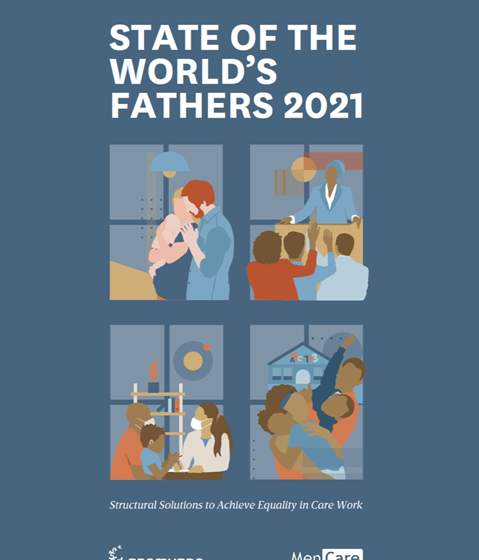 Nikki van der Gaag reflects on the state of dad-dom ahead of fathers’ day on Sunday. She is a co-author of this year’s State of the World’s Fathers report

One thing is certain in these uncertain times. Being a father has changed. I have never seen so many dads out with their children as I did when I walked in our local park today. Confined to the home or furloughed, dads have been spending more time with their children and partners than ever before. Many are trying to share work time and care and domestic work more equally with their wives and partners.

Research by UN Women in 47 countries found that between 35 and 80% of women reported that their male partner had  increased the time spent on care and domestic tasks during lockdown. In the UK, a recent survey by the Fatherhood Institute found that 78% of fathers reported spending more time with their children, with one dad noting that: ‘Trying to balance work and family was difficult. My daughter emptied all her glitter over the floor (twenty tubs) during a Teams meeting.’

Many men say that being at home more has improved their relationships. Fathers living with their children in Sweden said they were less likely to feel depressed or stressed during COVID-19 lockdowns, and many found increased meaning in their roles as caregivers. Staying at home also made dads realise the amount of time and work that their wives or partners put in to running the household:   ‘It is quite challenging. I saw the stuff she goes through when I am at work. I seem to understand her better and she is reacting to me in a more positive manner’ said one father in the UK.

So could the pandemic finally mean dads step up and do their fair share in the home? It is about time. Prior to the pandemic, in every country in the world, women were doing the lion’s share of the care, often on top of paid work. And this had changed little over decades, despite progress in other areas of women’s rights. In fact, research in 2019 showed that in 23 countries the gap between women and men doing care in the home closed by only seven minutes over a 15 year period. At that rate, it will take 92 years before care is shared equally.

However, most predictions about the effects of coronavirus on gender equality are not positive:: ‘A year into the pandemic, we are no longer just worrying about progress on women’s equality coming to a standstill. We’re now seeing the possibility of such progress being reversed’, says one international report. 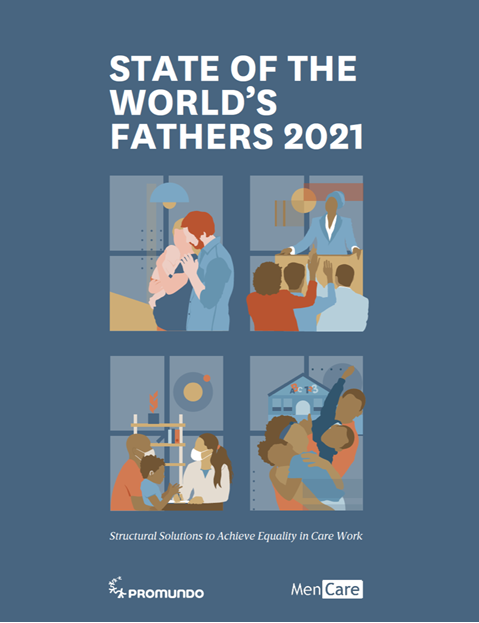 These negative trend include other consequences of lockdown, including a global increase in domestic violence in what Phumzile Mlambo-Ngcuka, Executive Director of UN Women, describes as a “shadow pandemic’. There have been negative effects on gender at work too: as lockdowns ease, more men than women are going back to work. In the US, 70% of mothers who were essential workers or working from home  reported that it was difficult to balance work and family, and more than one in ten mothers of young children left their jobs due to childcare responsibilities at some point in 2020.

This widening gender gap is partly because men still often earn more than women, which mean that families cannot afford for dads to stay home – unless their leave is paid at the level of their earnings.. In addition, women are more likely to be working in sectors such retail or hospitality that have been hardest hit by the pandemic, and they are still responsible for the bulk of care and household duties. A study In 14 Latin American countries found that 50% of women but only 3.2% of men said their unpaid care and domestic work meant they were out of the workforce.

The greatest impact has been on those who already face discrimination. Research in the US in June 2020 found that 57% of White women said their daily domestic and care work had increased. This rose to 71% of Black or African American women, 71% of Latina women and 79% of Asian women.  In the UK the least advantaged fathers were more likely than others to be furloughed or lose their jobs, and less likely to be able to work from home (3% vs 67% of fathers from social groups A and B).

And women are still bearing the brunt of the unpaid care and domestic work in the home, even when fathers or partners are present. An international study in early 2021 found that all over the world,  during lockdowns, women have been spending up to 30 hours a week just on childcare – the equivalent to another full-time job. While men are doing more, this has not changed the overall unequal proportion that women carry out compared to men in heterosexual households. As one report notes, the stress for women has been huge: ‘From the outset of the pandemic, mothers faced pressure to “do it all” but with fewer resources and support than before.’

So what is holding men back from doing their equal share in the home? Many fathers say they would like to do more, and this has been boosted by their experiences in the pandemic. In the UK, research found that 42% of mothers and 28% of fathers said they needed to continue to work flexibly once the pandemic ended to meet childcare commitments.

But this is not just about individual choice: if fathers and male partners in heterosexual relationships are to share care equally with their wives and partners, it will take a concerted effort on the part of governments and employers to make this a reality.

Take the UK’s so-called shared parental leave policy. Women have up to 52 weeks maternity leave, fathers only get a fortnight. And even this is not working. For example, only 2% of couples split their entitlement, partly because the amount paid is so low.  There is a growing campaign which argues that the only way to support dads to be able to take the leave is to make it fully paid and non-transferable – if they don’t take it, they lose it – and to ensure that employers are also supportive.

This will mean radical change. But that change must come. The dads looking after their children – and hopefully cleaning the toilets and doing the laundry and sending the birthday cards and dealing with glitter– are voting with their feet. As this father, from Chile, noted: ‘I realise that I always had the idea of being out there, going out to work and coming back at night to sleep. But coronavirus has made it easier to be at home, and I think this opens up the possibility that this way of working is maintained.’

Our research for the State of the World’s Fathers reports over the past six years has shown that sharing the care at home is a key driver of gender equality. It is good for children, good for women, and good for men as well. If we cannot use the pandemic to make these changes, when else will we get the chance?

2 Responses to “How has Covid affected Fathers and Gender Equality? What’s Next?”