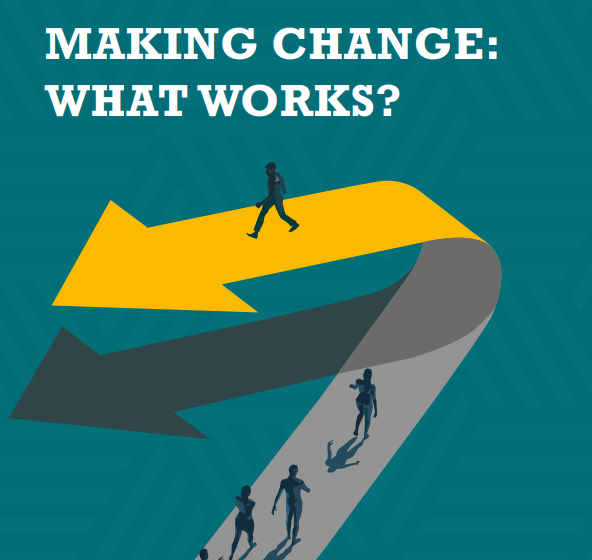 Making Change: What Works? is a smart new report from IPPR and the Runnymede Trust, drawing lessons from some of the most effective campaigns of recent years. Although it is UK focussed, there’s lots to chew on for activists everywhere. Here’s the exec sum, which mercifully, didn’t even need an edit.

Movements change the world. Throughout history, loosely organised networks of individuals and organisations have sought changes to societies – and won. From the abolitionist struggle and campaigns for voting rights to #MeToo and #BlackLivesMatter, the impact of movements can be seen everywhere. Over the last year, IPPR and The Runnymede Trust have sought to understand what we can learn from movements that have made change – as well as those who have fallen short – for our efforts to create change today.

We did this by exploring what worked and didn’t work for four movements from recent decades. These were:

The most effective movements seek to change the goals of society relating to their cause and the mindsets of those with power and the public at large. For example, the LGBTQ+ movement has helped transform attitudes towards LGBTQ+ people and, in turn, has shifted institutions and wider society from a position of persecution to greater equality.

Too many movements believe that the best way to achieve this is by evidencing the need for change. In this view of the world, people with power (or the public) simply lack evidence of the problem and how to solve it. This is what we call the ‘information deficit’ approach.

This is fundamentally flawed. Instead, successful movements seek to close what we call the ‘salience deficit’, where the public or power-holders do not think the issue is important or see it through a different frame, and the ‘power deficit’, where the people wanting change are not in positions of power or have limited influence on those who are.

To do this, movements build a campaigning infrastructure to tell compelling stories that speak to people’s values and identities in order to shift the debate, and seek to capture existing sources of power (eg political parties, media) or build alternatives (such as new coalitions or institutions).

Our research suggests that the most effective movements seek to build three key characteristics:

1. Breadth (diversity): The ecosystem has a broad range of different groups and activities, from rebels (such as Black Lives Matter (BLM), Extinction Rebellion and OutRage!) to reformers (such as Runnymede, Green Alliance, Stonewall). This allows movements to simultaneously push for change from different perspectives, using different methods.

2. Depth (capability): The ecosystem’s groups have sufficient resources and ability to undertake these activities effectively including money, talent, and knowledge. This often requires philanthropists to crowd in funding.

3. Inter-connection (community): The ecosystem is well connected, whether tangible (such as formal convening organisations) or intangible (eg trust and shared language). This allows organisations to specialise and coordinate change activities – ensuring they add up to more than the sum of their parts.

The most effective movements have active ‘cultivators’. These organisations do the work that is in everyone’s interest but no-one’s individual responsibility. This includes:

• Resourcing: Cultivators are often (though not always) funders, but they also seek to crowd in other investors. They focus on ensuring that investment is achieving breadth, depth, and inter-connection.

• Collective care: This includes cushioning perceived failures, mediating tensions within the movement and ensuring the wellbeing of organisations and people.

Many movements lack active cultivators. In their absence, these movements often miss out on these vital functions and suffer as a result.

Insight 4: Successful movements prepare for and then harness external events

Throughout history, high-profile events that the status quo cannot explain or effectively respond to are catalysts for change. These events can offer a movement the chance to increase the reach and perceived significance of their cause – as well as reframing how the public or powerholders see it. They can also disrupt or catalyse new sources of power.

This can be seen in the spike in interest and reframing of the debate following the murder of George Floyd in the US and the Black Lives Matter protests of summer 2020 and similarly the debate about the environmental crisis after the Extinction Rebellion protests in April 2019. These movements effectively seized the opportunity to reshape the debate.

But ensuring an event is harnessed for change rarely happens by chance. If a movement doesn’t have the capability to act in the wake of an event – if it lacks the resources and capacity to understand the moment, create a new narrative, and effectively intervene in debates – it will struggle to take the opportunity provided. This seems likely to be the case with the social determinants of health movement after Covid-19.

Insight 5: Movements must mine their assets – and address their limitations

Movements differ in ‘what they have to work with’ when seeking to make change. Movements that have the biggest chance of success focus on issues that are relatively simple and which impact a large population who can be mobilised to support change. Causes that are more congruent with existing systems or norms are more likely to succeed.

Nothing worth fighting for comes easy – and responding to the challenges of the 21st century requires change that is often incongruent with existing systems or norms. In doing so, movements can try the following.

• Simplify complex issues: The environmental movement has fought for clear goals, such as reaching ‘net zero’ greenhouse gas emissions, and broken the problem down into key sectors, such as emissions from power.

• Make the invisible, visible: The public health movement introduced evocative ‘smoking kills’ campaigns and the race equality movement has fought to foreground and popularise the stories of those suffering under systemic racism and racial injustice.

• Increase the power of excluded groups: The LGBTQ+ movement has recruited new allies focussing on family and friends and built power through political representation.

• Make change more congruent with status quo: The environmental movement has championed technology as a way of reducing the economic cost of action and LGBTQ+ movement has focussed on ‘assimilationist’ approach.

However, these approaches do not come without compromise or risk. We believe that movements – whether for economic, environment or social change – face a similar challenge: simplifications and accommodations that might have helped win change previously now limit the ability to deliver the change some movements seek. They can result in incomplete change and leave people behind. The challenges of the 21st century require structural change to economies and wider societies and the rebalancing of power.

Lots more detail in the full 50 page report — well worth a trawl.