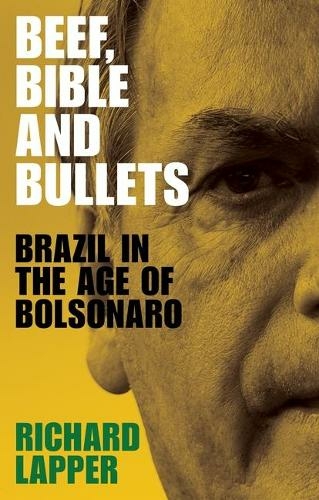 One lesson of recent times is that countries’ global reputations often have little to do with their underlying realities. The Netherlands is not all a happy liberal paradise of coffee houses and cyclists. And Brazil is not all sex, carnival and footballing genius.

In the case of Brazil, the world has woken up to this through the rise and chaotic administration of Jair Bolsonaro, hopefully destined for the political scrapheap in this October’s elections. His antics inevitably evoke those of his better known fellow demagogue, Donald Trump, but given that both of them behave like a classic Latin American political figure – the caudillo – perhaps it’s better to say that Trump resembles Bolsonaro, not the other way around.

In Beef, Bible and Bullets, FT journalist Richard Lapper (full disclosure, he’s a friend) provides a (very) detailed account of Bolsonaro’s rise and period in office, from a low-profile pro-military wingnut without a political project to…. a high profile pro-military wingnut without a political project. As the title implies, Bolsonaro has risen to power on the back of a coalition of big cattle interests, evangelical Protestants, and gun-toting militias (and some military – unlike Trump, he started his career in the army) – neither the president or the coalition is stable or coherent, it turns out.

Lapper has been covering Latin America for decades, most recently as the FT’s Latin America editor, and editor of its specialist Brazil briefing. He is deeply immersed in its political, cultural and social tides and currents (sometimes overwhelming so for the non-Brazilianist – struggling to remember all those names reminded me of trying to read Tolstoy). He shows how those currents – residual affection for the military, the rise of social media and eclipse of traditional forms, growing contempt for conventional politics driven by a succession of corruption scandals, a fierce recession, a rise in drug-fuelled social violence – came together to create a political implosion and pave the way for an anti-politics politician like Bolsonaro to come to power, which he did in 2018.

His period in office, like Trump’s, seems to have been total chaos, characterized by snouts in the trough, a horrendous upsurge in deforestation in the Amazon and elsewhere, a ‘war on woke’ and a catastrophically inept response to Covid. He has often appeared out of his depth, obsessing about minor issues like fisheries (especially Tilapia) and earning the nickname ‘the President of small things’. Sound familiar?

As we head into October’s elections, Bolsonaro is trailing former president Lula at the polls, but don’t count him out just yet. Because the unpleasant truth is that many of his views chime with those of large swathes of the Brazilian public (back to the Netherlands). A poll in 2020 found that 61% of Brazilians supported Bolsonaro’s proposal to open schools run by the military, and majorities opposed gay marriage and abortion rights. He could still come back from the political dead.

Two things about the book grated a bit. It’s a classic journalist’s book, brilliant on detail and description, but weaker on overall arguments or conceptual frameworks. I wanted a bit more accompaniment – to know why I was reading all this. The second is not Lapper’s fault at all, but it’s really hard to write books about breaking stories like Brazil’s – you risk being instantly out of date or wrong if you make too many predictions. Lapper tries to avoid doing so, but that means the book rather fizzles out.

Luckily he’s working on an update for the elections. If you want to understand the real politics of the real Brazil, this is a good place to start.