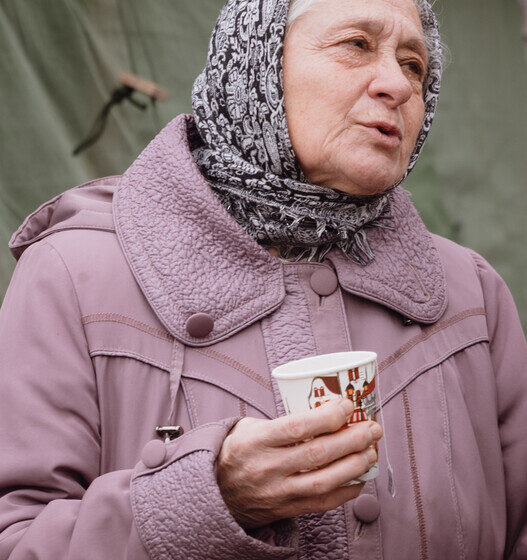 The war in Ukraine has destroyed everybody’s lives regardless of who they are. We have watched in horror as children have been passed over heads onto trains, at fathers left to fight, and a steady trail of exhausted, traumatised people of all ages fleeing further West

But it is an uncomfortable truth that while war does not discriminate, the international response does. Time and again, the toll of war on older people is overlooked as they struggle to survive and piece together a new normal. As this conflict unfolds, there are millions of older people confronting the scourge of war, isolated and alone.

One in three of the people needing assistance after the Russians invaded eastern Ukraine in 2014, were over 60, making it the world’s oldest humanitarian crisis. Yet the international community failed to recognise this, failed to identify and respond effectively to meet their specific needs.

For many, conflict was not new, having lived through World War II, Soviet rule and the road to independence. Their bodies, minds and communities were already scarred.

When I last visited the region in 2016, I saw the toll that the conflict had taken. The local economy was on its knees, poverty and long-term unemployment had rocketed. Younger people had left for work elsewhere, leaving older relatives alone with nobody to care for them. There was no electricity or gas. Untreated chronic health conditions – like diabetes and high blood pressure – had caused many to lose their independence, develop disabilities and face unnecessary suffering. The fear of intermittent shelling and the risk of landmines was constant.

The contact line exacerbated isolation for so many. Those who lived in non-government controlled areas, could only access healthcare and pensions by enduring long queues and bureaucracy to cross the line into government-held territory. By 2019, more than 450,000 of the 1.2m pensioners living in areas outside of government jurisdiction were surviving without a basic income because they were required to register as an internally displaced person to receive their pension. Not only were they living in a state of war, they could barely afford basic food supplies or medication.

Now, many of the people I met are hidden away within their homes. We surveyed more than 1,500 older people in eastern Ukraine at the beginning of March and found that 99% of older people in Donetsk and Luhansk had no plans to leave. For many, mobility difficulties mean leaving is not possible. Many do not have families nearby to help. Worse still, many cannot even reach the local shelters, making them sitting targets.

This experience is not unique. Older people often remain at home in times of conflict. Some may stay because they do not want to be a burden to their families, they want to protect their home, or simply because of moving so many times before. But the body vest of being older is no protection for the barbarity of war. And the hand of assistance frequently fails to reach them in its aftermath.

As the war sweeps further into Ukraine, there will be more older people left behind, isolated and in urgent need of food, water, heating, and mental health support. 25% of Ukraine’s population is over 60-years-old.

For those who make it across the border into neighbouring countries, they will also require specific help as they attempt to recover from the journey and navigate new surroundings in a blur.

A report from Human Rights Watch examining different conflicts shows how older people are subjected to the same abuses as others – including killing, attack, abduction, rape or torture – and can be at greater risk.

Of course, the ability to escape is one factor. Reports of older people unable to flee so being pushed back into burning homes by security forces in Myanmar haunt me. But the Human Rights Watch report also documents other challenges, like displaced people facing difficulties in registering for and accessing assistance in South Sudan, having their properties looted in Gaza City, or being arbitrarily arrested and detained in Ethiopia.

How do older people access the medication they need or manage without the walking stick they previously used in a war zone? How do they rebuild their homes with no income or family support? How can they recover from the devastating mental health issues of isolation and trauma? This is the challenge we are stepping up to at HelpAge International, as we respond to the impact this crisis is having on the older people of Ukraine.

These people represent millions of older women and men in other conflicts around the world, whose specific needs for survival also remain unaddressed and expose them to further danger. For too long, older people have been ignored by international bodies and governments. This is systemic ageism and an example of how bad the global system is at responding to older people’s needs.

The oldest humanitarian crisis must be a wake-up call for governments and the international community to urgently reset its approach. The specific needs of older Ukrainians must be identified and met. And this should be the start of a more inclusive approach when responding to humanitarian emergencies elsewhere around the world.