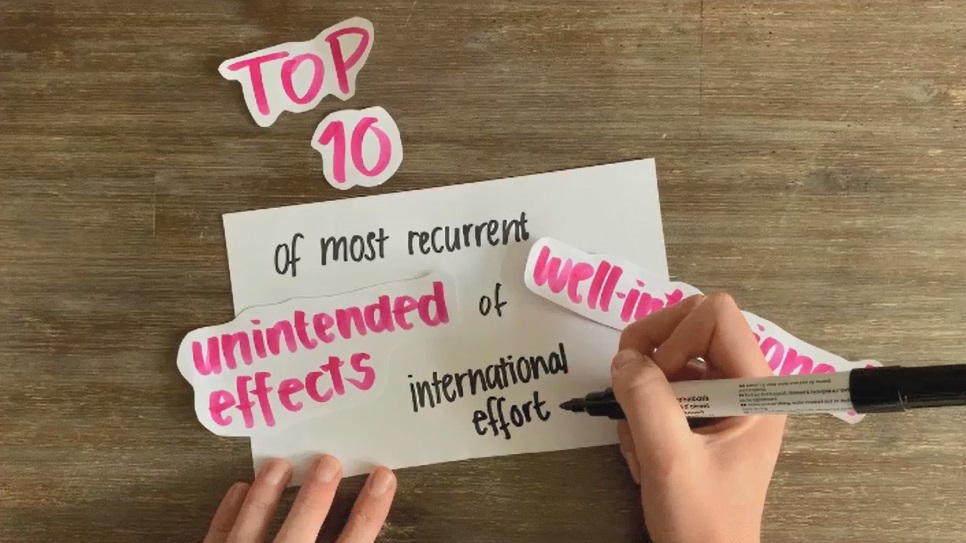 What are the most prevalent unintended effects of international cooperation? Dirk Jan Koch, together with the Center for Global Challenges of Utrecht University, analyzed all project evaluations by the Policy and Operations Evaluation Department (IOB) of the Dutch Ministry of Foreign Affairs since the turn of the century. Here’s the top 10. The figures in brackets show the number of times a certain effect occurred. The fact that an effect is found less often does not mean that it is actually less prevalent: it may also simply be a blind spot for evaluators.

Catalytic effects are head and shoulders above the rest in terms of frequency. When we think of unplanned effects, we only think of negative side effects, but that is not correct. Think for instance about medicines. They can also have positive side effects: Viagra was originally intended to lower blood pressure. Catalytic effects occur when an intervention sets a positive chain reaction in motion, ultimately achieving more than expected. This also applies to international cooperation, for example in the field of women’s rights. You want to strengthen women’s rights because it is worth pursuing in itself, but you then see that child mortality is also reduced as a result: a catalytic effect.

The second place is taken by side effects that have an impact on the quality of governance. At the family birthday you may hear about this if you are told that you are involved in development aid. “Aid only makes corruption in those banana republics worse,” I once heard my uncle say. But what is striking is that governance effects are often positive. When recipient governments see that a foreign-backed reform is working in one province, they often scale it up to other provinces. So, yes ‘governance effects’ are important, but in a more balanced way than is often thought.

Unfortunately, leakage effects are all negative and take the bronze medal. There is a leakage effect (some call it a waterbed effect) if an intervention seems to solve a problem, but it is actually only relocated. I described one example in an earlier column ‘Poaching local personnel‘. Within international cooperation you see it, for example, in capacity building programmes: you strengthen the NGO; you hire extra people, you give them extra training, but… you took these employees away from the national government. This weakens the government and moves the capacity problem instead of solving it.

The behavioural effects fell just short of a medal! You can speak of unplanned behavioural effects if those involved in aid programs behave differently than you expected. The erosion of intrinsic motivation when money is given for something that is normally provided free of charge exemplifies this. Imagine: you always wanted to protect the forest where you live, but now you get money from the World Bank for 2 years if you don’t cut down the forest. Then what happens after 2 years when the World Bank payments end? All too often it turns out that intrinsic motivation decreases and deforestation increases.

Isn’t international cooperation supposed to reduce inequality? Yes indeed. Yet it appears that it can actually increase marginalization, and that aid can further weaken the position of the vulnerable. This has emerged, for example, in certain economic programs for women. For example, women received microcredit, but they had to transfer the loans straight to their husbands. Subsequently, the women were left with the problems when the loan had to be repaid, and often had to deal with additional domestic violence in the process.

External interventions can induce changes in prices. Food aid, for example, makes food much cheaper: that is good for consumers, but disadvantageous for local farmers who can no longer sell their products. But external interventions can also make things very expensive, as the Advisory Council on International Affairs also described in its last advisory report on ‘social protection’. Food prices went up so much in certain remote Philippine villages that more children of families who did not receive “cash transfers” went to bed hungry.

Many people can move to an area if there is a successful development project. But there is also a flip-side effect: the resettlement effect. People can be resettled, sometimes forcibly if, for example, a plantation is started with development funding and the local population needs to get out of the way. Because these migrants/resettled populations often literally fall outside the scope of the evaluators during a baseline or final measurement, these effects all too often remain out of the picture.

One can speak of an unplanned conflict effect if extra tensions arise as a result of the external intervention, for example between recipients and non-recipients, especially if there are (ethnic) tensions between these two groups to start with. Fortunately, it seems that organizations are increasingly pursuing a ‘conflict-sensitive’ way of working. The major blunders of organizations that unexpectedly stimulate conflict by accidentally favouring one ethnic group over others  are no longer reflected in the later evaluations of IOB.

What surprised me is that we did not find the ‘nationalist backlash effect’ in any of the evaluations, while it is very present in the academic literature. For example, there are many indications that some local leaders are only too happy if Western organizations stand up for democracy or women’s rights: they can strengthen their own legitimacy by dismissing this as foreign interference, and sometimes orchestrate a virulent backlash. Unfortunately, these backlash effects are really a bind spot of the evaluators: and as we see in Afghanistan, this blind spot can cost us (and our partners) dearly.

A separate type of side effects are the poor performance effects. They are needless effects, which only occur through poor execution. In terms of the number of examples in IOB evaluations, these effects would actually take second place (35 cases), but because they are preventable I put them on the 10th spot with a special mention. An example of a poor performance effect concerns the competition between donors because of poor coordination, they often train the same people who get subsequently multiple per diems (as was also apparent from the IOB Kunduz evaluation).

Often, policy makers and evaluators say they don’t know what to look for when asked to consider or evaluate unintended effects. With this top 10 in hand, that is in any case no longer a valid excuse.

16 Responses to “The Top 10 unintended effects of international cooperation”