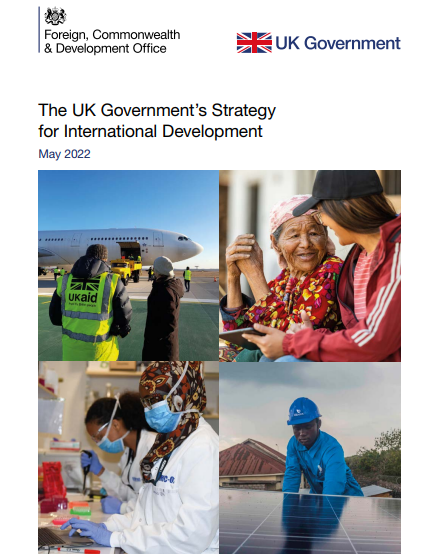 You might remember Duncan’s ‘rant’ (his word) a few weeks ago about the Shameful Implosion of UK Aid, with the Government “hacking away at aid lifelines in order to hit the targets for cuts, shovelling money out the door to other government departments, dumping unwanted vaccines and charging them to the aid budget”. Bleak stuff.

What then should we make of a new development strategy from the UK, out yesterday? After reading its 30 pages, I was left with the impression of a department struggling to reconcile two contrasting beliefs about itself.

On the one hand, there are plenty of warm words about the UK’s commitment to tackling the big global challenges, and its “proud record of global leadership on international development”. There are commitments to support women and girls, including promoting education, driving progress on sexual and reproductive health, and action to end gender-based violence. It’s also good to see climate and health as headline priorities, after concerns these would be deprioritised, including affirming the UK’s climate finance commitment of £11.6bn and balancing funding for adaptation and mitigation.

On the ‘how’, it’s about a ‘what works’ approach, harnessing the UK’s “expertise in the patient development of systems and institutions to strengthen the resilience of countries and communities”, as well as a pledge for more decision-making at country level. So far so good.

On the other hand, big chunks of the strategy seem to be more about tackling China rather than tackling poverty.

We know a major priority for Liz Truss, the UK Foreign Secretary, is to manage the inexorable rise of China. So it’s significant that a big part of this strategy focuses on deploying many of the same tactics China itself has used for many years. There’s a big section on “British Investment Partnerships”, which puts “our national economic power at the centre of our development approach: capital markets, investment and growth expertise, independent trade policies”.

This all sounds worryingly like aid for trade and the financialisation and privatisation of development, and it’s ringing alarms bells for many. As Sarah Champion, Chair of the UK’s International Development Committee put it: “We all want our exporters to do well and to create jobs in the UK. But aid for trade is dangerous. It can distort the core, legally-stipulated purpose of our assistance – which is to support the poorest and most vulnerable. The UK has rightly been hugely critical of China for such an approach, so I fail to see why we are following down the same road.”

On the commitment to adopt a ‘what works’ approach, a key question is ‘for whom does it work?’ The danger with aid for trade is that it’s most likely to be potential investors or elites in developing countries. This speaks to a broader blind spot in much of this strategy, about how inequality is itself a key driver of poverty. The paper roundly fails to say how it will support traditionally marginalised groups who are often worst hit by the impacts of climate, conflict, or are unable to access health systems.

Another headline commitment is that the UK will “rebalance its ODA investments from multilateral towards bilateral channels”. Bilateral aid does come with some advantages – not least the potential to make sure money gets to local actors. But this needs to be accompanied by effective scrutiny of where the money is going, to ensure it reaches the poorest. Ranil Dissanayake from CGD also argues, “there is a curious tension with the heavy emphasis on things that multilaterals work on (climate, global health, infrastructure) in the objectives and the decision to use the resources bilaterally.”

Finally, and this might seem obvious, it’s going to be nearly impossible to deliver most of this if you don’t cough up the money. The UK has already cut £4.6 billion in aid since 2019. We’re seeing the devastating impact of the cuts already, particularly in the horrific crisis across East Africa, where up to 28 million people are facing severe hunger as rains fail for the fourth consecutive season. With the 0.5% ceiling still in place, that doesn’t look like changing any time soon.

Overall, at 30 pages, and with few concrete commitments on which it can be held to account (we’re told we have to wait for various sub-strategies for those), it all feels a bit thin and there’s a real risk this ends up sitting on the shelf. Ultimately, the strategy betrays a kind of identity crisis going on in Government and an inability to decide whether or not it’s serious about development on its own terms, rather than as a means to a geopolitical end.