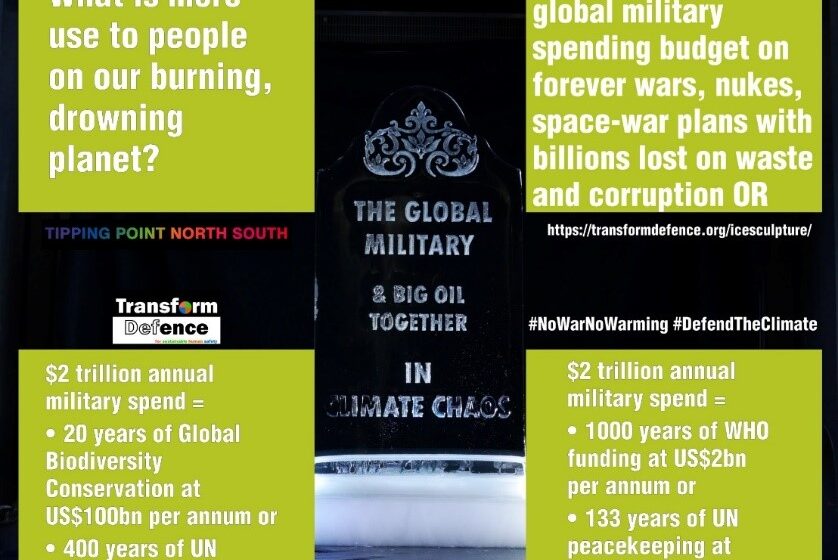 As a former trade and tax campaigner (Christian Aid), I was fascinated by the progression of development sector campaigns – from debt to trade, from trade to tax.

I now see something similar in the climate/military relationship because conveniently, deliberately, hidden away inside the climate debate is the almost invisible matter of global military GHG emissions.

Together with my colleague Dr. Ho-Chih Lin at Tipping Point North South, we’d been researching military spending through the development lens.  Before too long we had inevitably arrived at the military/climate/development angle.

Global military spending is currently $2 trillion per year, twice as much as at the height of the Cold War. Although the emissions data available is far from comprehensive, it’s obvious that military spending literally fuels military GHG emissions.

They are locked into fossil fuel dependent hardware like tanks, warships and fighter jets, guzzling enormous amount of fossil fuels in operation. For example, F-35, the most advanced and most expensive fighter jet currently on sale, drinks 6000 litres/ 1585 gallons of fuel per flight hour. The Pentagon is the single largest consumer of energy in the US and the largest institutional consumer of fossil fuels in the world.  In the UK, the MoD, by its own admission, is the single largest contributor to GHG emissions within the central government, responsible for more than half of the total.

For all this, militaries are exempt from compulsory reporting of their GHG emissions to UN processes and have no realistic or practical zero-carbon plans.

And ultimately, these expensive fossil-fuel-dependent weapons systems are intended for use, as the people of Yemen, Syria, Iraq and Afghanistan will testify.  They will face the horrors of war, their homes destroyed and will rely on emergency humanitarian appeals – while at the same time living on the frontline of climate change.

Conversely, the war profits accruing to defence contractors will guarantee very healthy shareholder dividends. And while humanitarian appeals may or may not reach their target, weapons manufacturing is lucrative business to be in. The Lockheed Martin F-35 Fighter jet (still far from ‘mission capable’) is partially built and maintained by British weapons makers and now being sold around the world. It is projected to cost $2 trillion over its lifespan – a massive public to private wealth transfer.

If it is right to demand that rich nations’ pay up for their historic emissions burden; if it is right to address the damage of western finance on development through the lens of indebtedness or tax havens, then surely the time has come to look at the impact on the global south of rich nations’ foreign and defence policy as manifested through insane – ever rising – levels of military spending.

It’s a cliché to say there is always money for war, but maybe that’s because we know it to be the case.   Yet:

Cop26 Sees the Military Emissions ‘Cat’ Leap Out Of The Bag

Last year, we were part of a small group of organisations and campaigners who used the Glasgow COP to push for this issue to ‘break out’. Open Letters to G7/20 with leading signatories (Greenpeace, Cafod, Christian Aid, Michael Mann, Jason Hickel, Brian Eno) as well as UN Climate Ambassador Nigel Topping;  Scotsman full page ads and new military emissions website all garnered media. And alongside our emissions work, we had also developed a 5% framework formula for cuts to military spending.

But important and ambitious as they are, these are but stepping stones to something much deeper: a transformation on foreign and defence policy, such that it is fit to deliver on the people and planet 21st-century needs in a post carbon, pandemic ready, climate changed world.

Are we able to transform defence for sustainable human safety?

Moreover, at this time when we are (belatedly) addressing the decolonisation of aid, we would be missing a trick if the role of military power – past, present and future – was omitted. If the unforgiveable events that unfolded in Afghanistan last year 2021 – a centuries old geopolitical tragedy – doesn’t bring this home, what can?

It’s not enough that these concerns have traditionally been considered the remit of the peace/anti-war movement only.  Can room also be found on the development agenda – and is there the courage – to take it on?

One Response to “What has global military spending and emissions got to do with development? Rather a lot.”