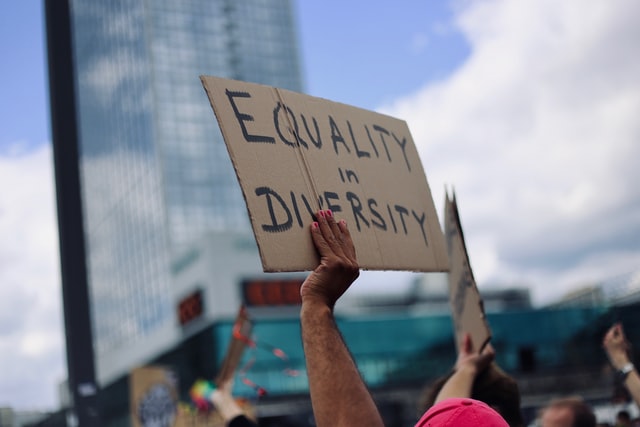 In the past few weeks Oxfam’s work on anti-racism has attracted some criticism. Various commentators have characterised it as “woke posturing” or “anti-white.”

I think they have got it wrong. Let me explain why tackling racism is an integral part of Oxfam’s mission.

It is almost 80 years since a small group of volunteers, motivated by a sense of compassion and justice beyond borders, founded what became Oxfam. The group organised aid for starving citizens in Nazi-occupied Greece and lobbied Churchill’s government to allow food imports through the Allied blockade.

Those of us working in Oxfam today have been thinking about how we retain our founders’ spirit while re-imagining this wonderful organisation for this era. A key tenet of our approach is to focus on how we work as much as what we do.

We’re committed to evolving our culture to become a truly safe, feminist and anti-racist organisation, because we believe in a world where no one is left behind, and where power is shared fairly. That must be as true within Oxfam as within wider society.

Put simply, without tackling systemic racism around the world, we cannot end global poverty. Racism makes it harder for people to earn a living, feed their children and put a roof over their heads.

This isn’t just theory. We’ve seen it for ourselves. Many of the communities that Oxfam works with around the world have been scarred by exploitative colonial histories; histories that were often shaped by what Kipling called the ‘White Man’s Burden’. While colonial legacies are not the only factor that has shaped uneven development around the world, it is important to recognise that many of today’s global structures and institutions were formed at a time when power was held predominantly by white people.

There’s no blame game here. Being white does not make someone a racist, and nor are we saying that white people cannot experience poverty or be discriminated against because of the colour of their skin. And it shouldn’t need saying, but being anti-racist doesn’t make Oxfam ‘anti-white’. On the contrary, we want to build an inclusive global movement of people to overcome the injustice of poverty.

There are many different and overlapping kinds of discrimination that can hold people back, including those based on race, sexuality, gender identity, religion, physical ability, ethnicity and class or caste. Oxfam’s approach to fighting poverty is known as ‘intersectional’ because it seeks to understand how these intersecting factors affect people’s experience.

Critics have claimed Oxfam is more obsessed with various types of discrimination than with ending poverty. These are false choices. Meeting our charitable objects of preventing and relieving poverty require us to address the systems of power that keep people in poverty. Our efforts to improve safeguarding, advocate for women’s rights, tackle racism and fight poverty are deeply interlinked.

For Oxfam, it’s also a priority to live up to our values of equality, diversity and inclusion. In 2019, an independent inquiry into our culture found cases of “toxic” work environments and said sexual exploitation and abuse were “symptoms of several power abuses, manifested in varying degrees as elitism, racism, colonial behaviour, sexism, and patriarchy.”

We believe that you cannot deliver genuine social justice using toxic methods. As Gandhi said, ‘Be the change you wish to see in the world’. In recent years Oxfam has undertaken many important steps on our journey to improve, delivering an action plan agreed with the Charity Commission that included safer recruitment, greater oversight of safeguarding, and changes to working culture.

But we know there is more to do. Our recent survey – which was anonymous and voluntary – canvassed staff views to help inform the development of a Racial Justice Framework. This will be an important tool to guide both our internal culture change, such as HR policies to promote diversity, and external work, such as how we partner with communities overseas.

We want to have a thoughtful conversation with our valued staff and supporters about what each of us can do to build an anti-racist society. However well-intentioned we are as individuals, we are also part of a society in which racism exists. Almost two-thirds of the British population think there is a “fair amount” or “great deal” of racism in Britain, something brought home viscerally in the racial abuse of English football players. And a new study shows that 89 per cent of ethnic minority staff in the development sector do not think their organisations are committed to diversity and inclusion.

Talking about race isn’t easy or comfortable, and some of the concepts we are using can be challenging to get to grips with. Yet I believe it is more important than ever to have a nuanced, respectful conversation about how we move forward together.

As we approach our 80th anniversary, Oxfam has an ambitious new strategy that is rooted firmly in our founders’ resolve to tackle poverty and injustice around the world, while also making sure that we are challenging power imbalances, promoting diversity, and connecting people on a more equal footing.

I am often reminded of the words of Australian indigenous campaigner Dr Lilla Watson: “If you have come to help me you are wasting your time. But if you recognise that your liberation and mine are bound up together, let us work together.” If we get this right, if we work together, we can deliver a more equal, kinder future where we all win.

12 Responses to “Why Oxfam is talking about race”