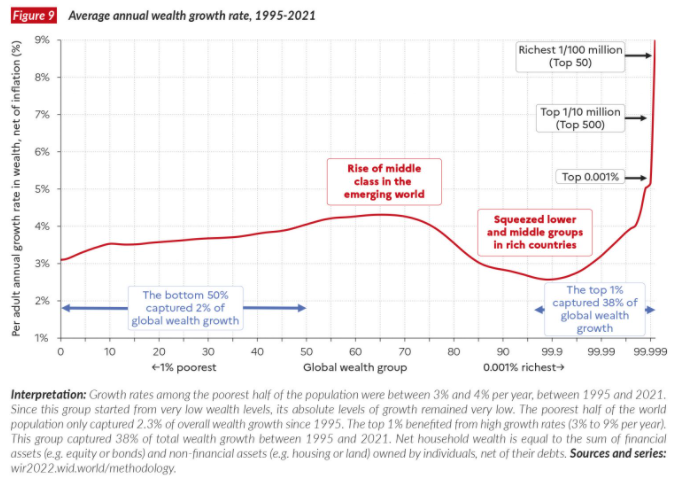 The World Inequality Report 2022 came out recently, and it’s a total gold mine, as you’d expect from a summary of the work of over 100 researchers over 4 years from every corner of the globe (OK, I know globes don’t have corners, but cut me some slack here – I’m clinging on til the Christmas break).

Here are some of the findings and graphics (lots of graphs) that jumped out (random comments from me in Italics). All figures are in Purchasing Power Parity US dollars:

[Latin America loses the top slot on regional inequality]: MENA (Middle East and North Africa) is the most unequal region in the world, Europe has the lowest inequality levels. Inequality varies significantly between the most equal region (Europe) and the most unequal (MENA). In Europe, the top 10% income share is around 36%, whereas in MENA it reaches 58%. In between these two levels, we see a diversity of patterns. In East Asia, the top 10% makes 43% of total income and in Latin America, 55%.

[More than average wealth/income, politics and history explain variations between countries]: National average income levels are poor predictors of inequality: among high-income countries, some are very unequal (such as the US), while other are relatively equal (e.g. Sweden). The same is true among low- and middle-income countries, with some exhibiting extreme inequality (e.g. Brazil and India), somewhat high levels (e.g. China) and moderate to relatively low levels (e.g. Malaysia, Uruguay).

The share of income presently captured by the poorest half of the world’s people is about half what it was in 1820, before the great divergence between Western countries and their colonies. In other words, there is still a long way to go to undo the global economic inequalities inherited from the very unequal organization of world production between the mid-19th and mid-20th centuries.

[The extremely wealthy have had a fantastic 25 years, and a spectacular pandemic]:The rise in private wealth has also been unequal within countries and at the world level. Global multimillionaires have captured a disproportionate share of global wealth growth over the past several decades: the top 1% took 38% of all additional wealth accumulated since the mid-1990s, whereas the bottom 50% captured just 2% of it. This inequality stems from serious inequality in growth rates between the top and the bottom segments of the wealth distribution. The wealth of richest individuals on earth has grown at 6 to 9% per year since 1995, whereas average wealth has grown at 3.2% per year. Since 1995, the share of global wealth possessed by billionaires has risen from 1% to over 3%. This increase was exacerbated during the COVID pandemic. In fact, 2020 marked the steepest increase in global billionaires’ share of wealth on record.

[Important new figures on global income inequality between men and women]: The World Inequality Report 2022 provides the first estimates of the gender inequality in global earnings. Overall, women’s share of total incomes from work (labor income) neared 30% in 1990 and stands at less than 35% today (Figure 12). Current gender earnings inequality remains very high: in a gender equal world, women would earn 50% of all labor income. In 30 years, progress has been very slow at the global level, and dynamics have been different across countries, with some recording progress but others seeing reductions in women’s share of earnings (Figure 13).

[Conclusion]: Addressing the challenges of the 21st century is not feasible without significant redistribution of income and wealth inequalities. The rise of modern welfare states in the 20th century, which was associated with tremendous progress in health, education, and opportunities for all, was linked to the rise of steep progressive taxation rates. This played a critical role in order to ensure the social and political acceptability of increased taxation and socialization of wealth. A similar evolution will be necessary in order to address the challenges of the 21st century. Recent developments in international taxation show that progress towards fairer economic policies is indeed possible at the global level as well as within countries. Inequality is always a political choice and learning from policies implemented in other countries or at other points of time is critical to design fairer development pathways