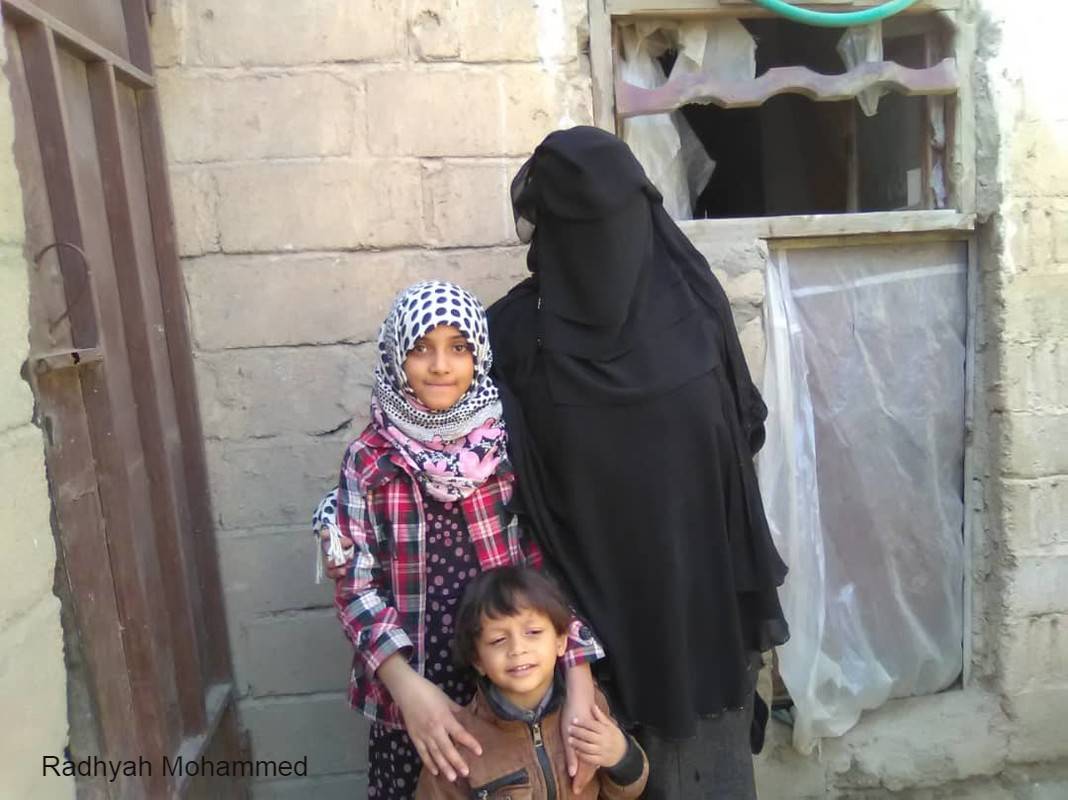 Ibtisam with her two children in her damaged house.

Other members of the G20 have exported more than US$17bn worth of arms to Saudi Arabia since it became involved in the conflict in Yemen in 2015 but have given only a third of that amount in aid to Yemenis, Oxfam said today.

The G20 heads of state are due to meet virtually later this week at a summit hosted by Saudi Arabia. Arms sales to the Gulf nation could come under fresh scrutiny as the US president-elect, Joe Biden, is on the record as saying he would stop arms sales to Saudi Arabia that fuel the war in Yemen.

The UK exported $2.2bn of arms to Saudi Arabia between 2015 and 2019, the last year for which records are available, but has given less than two thirds of that in aid to Yemen. The UK government has licensed $5.4bn of arms sales to Saudi between 2015 and 2020, more than four times the amount it has given in aid to Yemen over the same period. This doesn’t include ‘open’ licences granted which allow the holders to export an unlimited quantity of goods.

After five years of conflict, Yemen was already suffering the world’s biggest humanitarian crisis with 10 million people going hungry, the largest cholera outbreak on record and only half of hospitals fully functioning. Oxfam reported in August that there has been one air raid every ten days on hospitals, clinics, wells and water tanks throughout the war.

The arrival of coronavirus has only worsened these dire circumstances. And yet the United Nations’ response plan to get clean water, food and medical care to the most vulnerable, is only 44% funded this year.

Muhsin Siddiquey, Oxfam’s Yemen Country Director said: “Having suffered years of death, displacement and disease, the people of Yemen need these powerful members of the international community to bring all parties to the conflict together to agree to an immediate countrywide ceasefire and return to negotiations committed to achieving a lasting peace.

“Making billions from arms exports which fuel the conflict while providing a small fraction of that in aid to Yemen is both immoral and incoherent. The world’s wealthiest nations cannot continue to put profits above the Yemeni people.”

Saudi Arabia has escalated the conflict in Yemen by leading a coalition of eight countries in support of the internationally recognised government. When arms exports by G20 nations to other members of this coalition are included, the figure of $17bn rises to at least US$31.4bn between 2015 and 2019. That’s more than five times the amount those member nations of the G20 have given in aid to Yemen between 2015 and 2020. In addition, Saudi Arabia has given $3.8bn in aid.

Despite a unilateral ceasefire declaration by the Saudi coalition in April, fighting continues across the country. The governorates of Marib and Al-Jawf in the north of the country are the worst-hit by airstrikes while the governorate of Taiz in central Yemen is seeing the worst ground fighting. There’s been a recent upsurge in fighting in the key port city of Hudaydah, the most important point of entry for the food, fuel and medicines needed for 20 million Yemenis in the northern governorates to prevent famine and a recurrence of a cholera epidemic.

Ibtisam Sageer Al Razehi, a 35-year-old former teacher and mother of three, lives with her children in the remains of the family house in Sa’ada city which was damaged by missiles and artillery fire. Her husband was killed by an airstrike in 2015.

“I lost my husband, my children lost their father, we lost the breadwinner and because of war I also lost my salary as our last hope for living,” she said.

“Humanitarian aid has decreased a lot; now we receive food every two months instead of every month. I appeal to the world to have mercy on the children of Yemen and stop this war. We are very tired of living in war for years, we lost everything beautiful in our lives even the simple hope of peace.’’

Data on the worth of arms exports to Saudi Arabia and other coalition countries has been taken from SIPRI’s Arms Transfers Database. It includes exports between 2015 and 2019 inclusive.