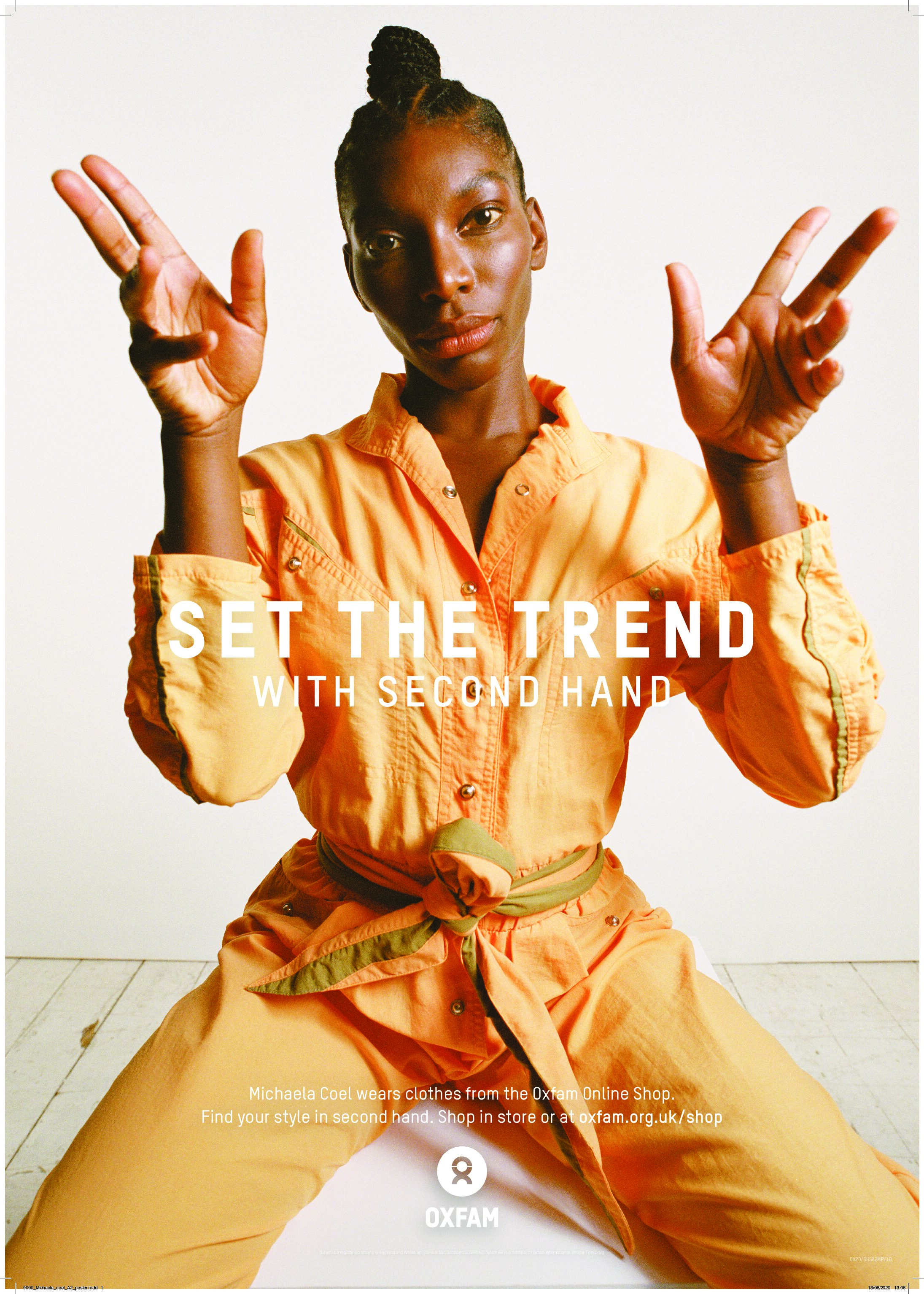 In this year’s campaign, Coel showcases Oxfam clothing which will be sold in a pioneering Selfridges pop-up shop as part of a month-long campaign celebrating second hand

The BAFTA award-winning actor, director, screenwriter, producer, playwright and poet Michaela Coel is the new face of Oxfam’s #SecondHandSeptember campaign, which is designed to raise awareness about the impact of fast fashion on the planet and garment workers.

Coel will feature in the windows of more than 500 Oxfam shops nationwide, showcasing clothing from the Oxfam Online Shop, and the clothes that she is sporting will be available to buy from Oxfam’s pop-up shop in Selfridges London Designer Galleries for four weeks from 7th September. This year, Oxfam is asking consumers to only buy second hand clothes for the month of September, and to share their pledge using #SecondHandSeptember and tag @OxfamGB.

Selfridges is one of a number of external partners supporting Oxfam’s Second Hand September. eBay is celebrating second hand with a joint auction of curated vintage and Oxfam pieces, which will launch on 10th September. Vestiaire Collective is running the Oxfam pledge to shop second hand and is hosting a charity sale of celebrity donated designer pieces on 16th September. All proceeds from both collaborations go to support Oxfam’s work to end poverty.

Michaela Coel said: “I’m honoured to be the face of Oxfam’s Second Hand September campaign this year. When presented with the data from Oxfam on the impact of fast fashion I felt compelled to add my voice to this cause; I hope it raises awareness and encourages us to reflect on our buying habits and to consider how small changes can have a huge impact on the environment – and in turn the fight against poverty.”

Oxfam created #SecondHandSeptember last year, amid growing demand from shoppers wanting more sustainable and ethical clothing. According to the Co-op, the total ethical consumer market – including food, drinks, clothing, energy and eco travel – has increased to over £41bn. Prior to the coronavirus pandemic, charity shop sales had increased four-fold from £133m to £732m in 20 years as many people are buying vintage and second hand clothing.

The Oxfam / Selfridges pop-up shop will stock an iconic 90s Gaultier PVC red suit, as worn by Coel, Ossie Clarke dresses, original leather flying jackets, and 90s sportswear. There will also be a collection to buy on Selfridges.com.

Bay Garnett said: “My idea behind the pop-up shop is about shifting perceptions and context around luxury and second hand clothes – specifically charity shops. So much money is spent by brands in investing in their marketing, advertising and stores; with the aim of charging high prices for their products. This project is a fun way to change the perception of charity shop second hand clothes – shifting them into the luxury context and space of the big guns! With all those bells and whistles – but, crucially keeping the prices the same as they would be in any Oxfam shop.”

All of the proceeds will go towards Oxfam’s mission to beat poverty around the world. Approximately £29m is raised each year from selling clothing in Oxfam shops. The profit raised from this is enough to provide clean water for more than 2 million people during a drought. In addition, Oxfam is helping poor people deal with the consequences of coronavirus around the world. Oxfam is working with local partners, governments and key UN agencies in 65 countries in response to the crisis. This includes preventive measures like distributing soap and building handwashing stations in the Rohingya refugee camps in Cox’s Bazar in Bangladesh, delivering clean water, sanitation and hygiene in Zaatari camp in Jordan and providing beds, handwashing facilities and protective clothing in quarantine centres in Gaza.

Danny Sriskandarajah, Chief Executive of Oxfam GB, said: “The pandemic poses huge challenges, but it also creates an opportunity to reimagine our economies and how we live, to make lasting changes that set us on track to a fairer, healthier world.

“Choosing second hand is one way that we can all play a part in shifting to more sustainable consumption and helping to build back better from the virus. By joining Oxfam’s Second Hand September movement, collectively we can send a message to retailers asking them to change their business models to better protect the people who make our clothes and the planet we all share.”

The coronavirus pandemic has severely impacted income in the charity sector; during lockdown Oxfam lost £5m a month.

Sriskandarajah added: “The UK has around 11,000 charity shops that are a core feature of high streets up and down the country – as they reopen after lockdown, they need support now more than ever to raise funds for a wide range of important causes.”

Sebastian Manes, Executive Buying & Merchandising Director from Selfridges said: “With Selfridges Project Earth, we have challenged ourselves to bring fresh, inspiring models and ideas into our stores and to our customers. The charity shop is an under- appreciated established model, founded in circularity and social enterprise, with Oxfam charity shops serving local communities for over 70 years. I’m excited to see this mindset-changing charity shop concept – challenging perceptions of both luxury and second-hand product – at the heart of our Oxford Street store as part of Project Earth.”

Another way people can support Oxfam besides taking part in #SecondHandSeptember is to volunteer in one of its shops. Following the pandemic, some volunteers have been unable to return to their positions because they are shielding.

For more information on volunteering in an Oxfam shop, visit www.volunteer.oxfam.org.uk