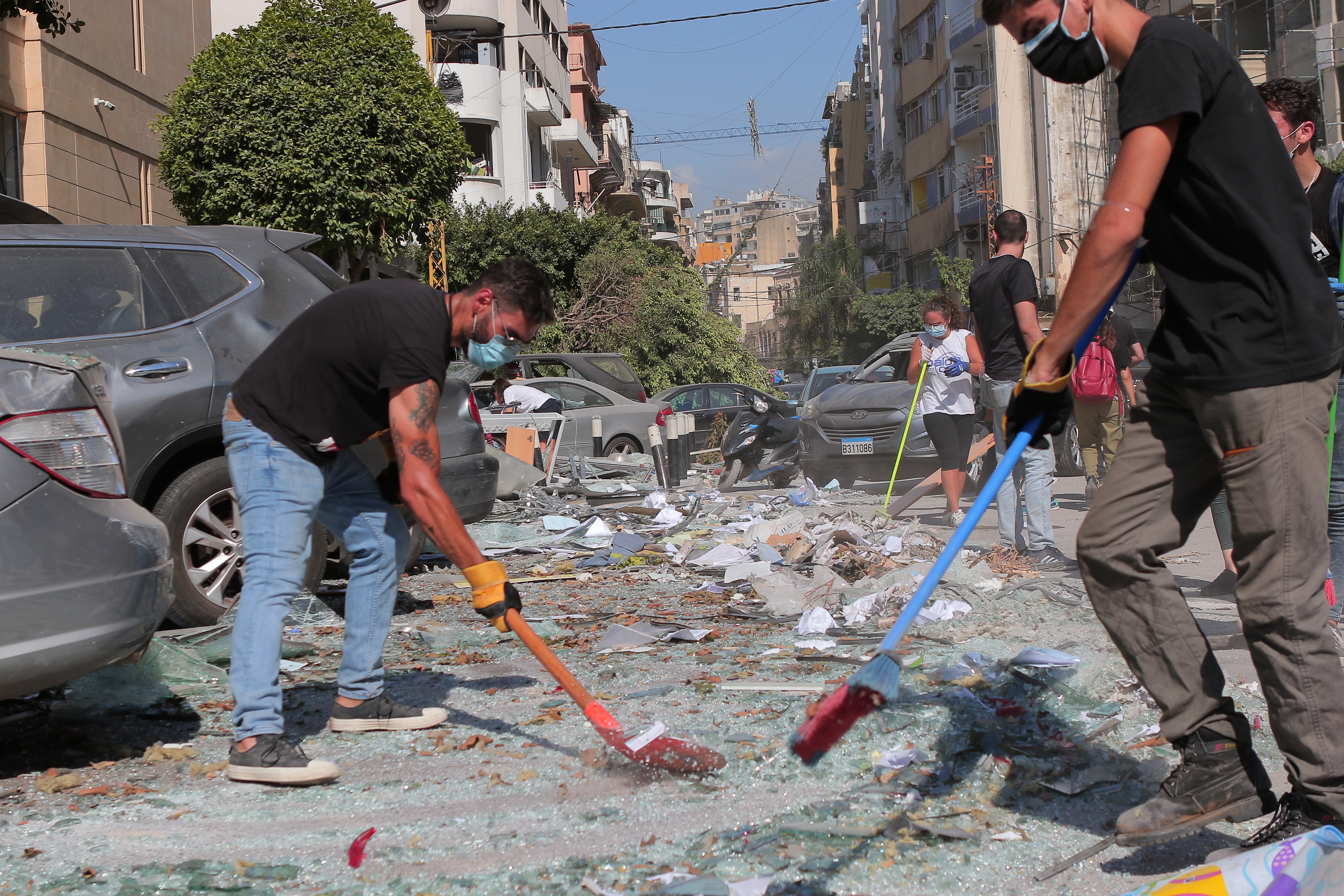 On August 6, 2020 communities, young and old, started sweeping the streets, and cleaning up the wreckage caused by the explosion in Beirut.

The 21 billionaires in the Middle East and North Africa (MENA), all of them men, saw their wealth increase by nearly $10 billion (£7.6bn) since the start of the Covid-19 crisis, Oxfam revealed in a report published today.

The windfall is almost double the estimated $5bn (£3.8bn) required to rebuild Lebanon’s shattered capital. Meanwhile, 45 million more people in the region could be pushed into poverty as a result of the pandemic.

For a Decade of Hope Not Austerity in The Middle East and North Africa also showed that since March, the extra wealth amassed by the region’s richest is more than double the regional emergency loans provided by the International Monetary Fund (IMF) to respond to the pandemic, and almost five times the amount requested through the United Nation’s Covid-19 humanitarian appeal for the region.

Ana Arendar, Oxfam head of inequality campaign, said “The pandemic has exposed the massive failures in the region’s economies, which have left millions without jobs, healthcare, or any kind of social security, while at the same time enabling the wealth of billionaires to surge by more than $63 million (£48m) per day.

“For too long, the interests of the richest have been prioritised at the expense of the needs of the poorest and the wider public interest. The result of this has been laid bare in the aftermath of the catastrophic explosion in Beirut, which has further exposed the fragility of the economy and will only exacerbate existing inequalities.”

Before the Covid-19 crisis, the MENA region was already one of the most unequal in the world. The virus has now further deepened the gap between the rich and the poor. 76 per cent of the region’s income goes to just 10 per cent of the population, with 37 billionaires owning as much wealth as the poorest half of the adult population.

Oxfam urged governments in the region to act quickly and raise revenues from those who can most afford to pay more to protect the most vulnerable in society.

Measures to protect the poorest in the region in response to the crisis have so far fallen short. It is estimated that only 11 per cent of stimulus packages in the region focus on social protection and health measures. Against this backdrop, an estimated 89 per cent of the region’s 16 million informal workers have been severely affected by pandemic measures. Foreign investment is also projected to drop by 45 per cent and 1.7 million people are expected to lose their jobs, 700,000 of them women, costing $42 billion (£31.9bn) in lost wages

If Jordan, Lebanon, Egypt and Morocco had implemented a two per cent wealth tax from 2010, these countries could have raised $38 billion (£28.9bn) in tax revenues, funds which could have been invested in improving public healthcare and rebuilding social protection systems.

Arendar continued “The crushing austerity in large parts of the Middle East and North Africa in recent years could have been avoided if the wealthiest in the region had paid more tax, a cost they can easily afford. This revenue could have given countries more flexibility on their spending policies and crucially, seen the region enter the Covid-19 crisis with less inequality and debt.”

To avoid millions more being pushed into poverty, the region’s governments should introduce wealth taxes, urgently implement healthcare and education for all and raise the minimum wage, in order to build fairer and more equal societies.

Forbes publishes a ranked list of billionaires’ net worth, both annually and daily, on their Real Time Ranking of billionaires. For the present analysis, Oxfam used the annual list published on 18th March 2020, just after the World Health Organisation declared the pandemic, and compared it to the annual list published on 16th August 2020. At that time, there were 21 billionaires in the list; individuals and families, from Algeria, Jordan, Kuwait, Lebanon, Morocco, Oman, Qatar and United Arab Emirates. The total wealth held by those 21 billionaires on 18th March was $47.3bn (£35.09bn) and $57.1bn (£43.4bn) on 16th August – an increase of $9.8bn (£7.46bn)

The estimate that 45 million more people in the MENA region could be pushed into poverty – living on less than $5.50 (£4.18) a day – is from analysis for Oxfam earlier this year by King’s College London and the Australian National University

The IMF has provided $3.91bn (£2.98bn) in regional emergency loans and the United Nations Covid-19 humanitarian appeal funding requirement for countries within the MENA region is just over $2bn (£1.52bn)

PwC has estimated the cost of damage to 30 – 40 buildings destroyed, 3,400 buildings uninhabitable and 40,000 total buildings affected to be $5 billion (£3.8 bn) https://www.strategyand.pwc.com/m1/en/beirut-explosion/beirutimpactsssessment-statusupdate1.pdf