Figures released today, Tuesday 9 February, show a big increase in licences issued for arms exports to Saudi Arabia, many of which will be used in the war in Yemen. Since the conflict started, nearly six years ago, over 4 million people have been forced from their homes with over 18,500 civilian casualties.

Martin Butcher, Oxfam’s conflict adviser said: “The UK government’s decision to issue licences allowing £1.36 billion of new bombs missiles and rockets to be exported to Saudi Arabia is immoral. Once again UK politicians have put profit before Yemeni lives. Both the US and Italy have stopped arms sales supporting Saudi and UAE offensive operations in Yemen in the past week and President Biden has said the war in Yemen has to end. The UK government should now follow their lead and end all support for offensive arms in Yemen as well as immediately stopping arms sales that risk being used in serious violations of International Humanitarian law.

“This is the largest increase in arms exports to Saudi Arabia since March 2015 and takes the known total of licenses up to £6.7 billion since the Saudi intervention in Yemen started. Yemen is living through the world’s largest humanitarian crisis, with two thirds of the population reliant on food aid and yet people are profiteering from the misery caused by these arms sales.”

Licencing resumed in July 2020 after a one-year suspension imposed by the UK Court of Appeal which ordered a review of the licensing process to see if Saudi use of UK arms in the Yemen conflict contravened International Humanitarian law.

Butcher continued: “The fact that the UK government has reinstated licencing and granted so many licences after the Court of Appeal ordered a review of the licensing process is shocking. Any rational examination of the evidence of regular attacks on civilians, their homes and vital civilian infrastructure for water and health would demonstrate a clear risk of violations of International Humanitarian Law. Arms exports to Saudi Arabia should stop immediately.”

Oxfam has written to the court in support of Campaign Against The Arms Trade’s new judicial review as important questions still remain unanswered. Oxfam research showed attacks on vital infrastructure (water/health) have occurred on average every ten days since 2015.  Data from the Civilian Impact Monitoring Project (CIMP) shows attacks on civilians and civilian objects took place every two days since the July 7 decision to resume licencing to Saudi Arabia by the UK government.

Ali Abdo Mohammed, 28 was killed in an airstrike after he had taken his family to safety in an IDP camp in Amran and was returning home to his village of Saada to rescue a trapped family who had called him for help. His widow Rahmah said: “He did not return, the next day, we asked some people there, they told us that our house was destroyed and his bus was attacked by a missile that shattered him and the bus into pieces. I could not even bury him because they found only some small pieces of his body.”

Oxfam is also concerned by the open licences under which unknown amounts of arms and services are sent to Saudi Arabia; avoiding scrutiny by Parliament, press and public.   Without official figures it is impossible to be accurate, but some analysts worry that sales of arms to Saudi Arabia covered by existing open licences may have increased significantly. 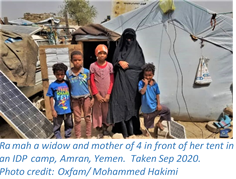 These figures are for the first quarter of reporting since licensing of transfers to Saudi Arabia resumed and are figures for all new licenses to Saudi Arabia since June 2019. Further information on UK arms sales to Saudi Arabia is available.  https://www.gov.uk/government/statistics/strategic-export-controls-licensing-statistics-1-july-to-30-september-2020#history

Figures for casualties and airstrikes from https://yemendataproject.org

In November 2020 Oxfam reported that G20 arms exports to Saudi Arabia were worth three times the amount of aid given to Yemen since 2015. http://oxfamapps.org/media/vi9wg