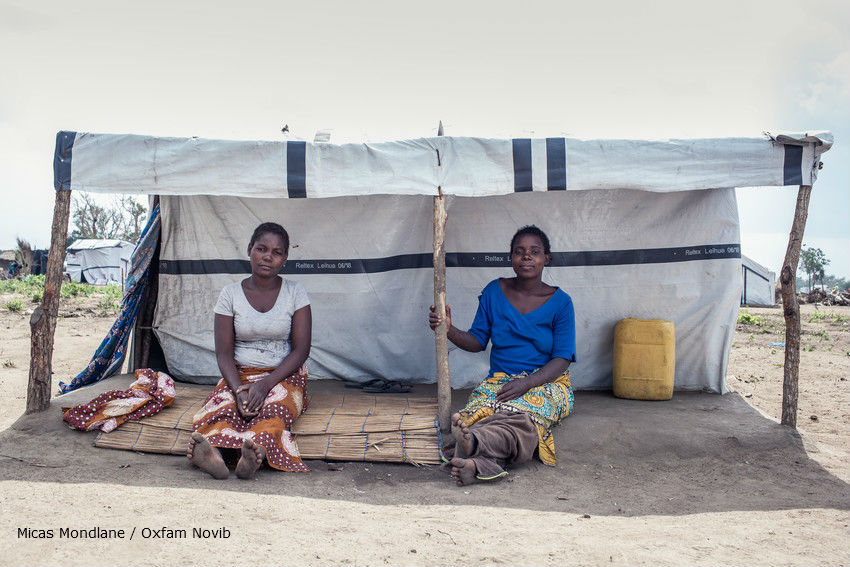 Arminda Francisco Wayeni, 30, and Laurinda Augusto Antonio, 22, in Maxquiri Alto, a new site for those displaced by flooding near the rural village of Guara Guara, Sofala district.

Six months on from the devastation wreaked by Cyclone Idai in southern Africa, hunger has risen sharply leaving farmers fainting in their fields along the southern shore of the Buzi river in Mozambique.

People are foraging for wild plants and surviving by eating tomatoes, one of the few fast-growing crops they could plant after extensive flooding damaged their lands, wiped away their harvests and destroyed their seed stocks.

The number of people going hungry in Mozambique has increased by 25 per cent since April to two million.

In dozens of resettled communities, relocated to mitigate the risk of future floods, people are not getting enough food and with the lean season approaching, there will not be a harvest until next year.

Rotafina Donco, Oxfam Country Director in Mozambique, said: “Things are taking an ominous turn, despite our efforts to provide people with essential aid. Women are skipping meals so that the little food there is can be given to children. Families are relying on wild plants as there’s not enough to eat. Hunger risks becoming the silent killer of those who survived the cyclone.”

Oxfam and its partners have helped over 600,000 people in affected areas of Mozambique including supplying clean water, food and shelter. But ten per cent of Mozambique’s population is now in need of food aid and levels of hunger are rising to crisis point in hard to reach areas in Sofala, Zambezia, Manica and Tete provinces, affected by Cyclone Idai, as well as Cabo Delgado where a second cyclone, Kenneth, struck.

The UN’s humanitarian appeal for Mozambique is less than half funded.

“Today, the emergency ought to be over but those who survived the cyclones are on the brink of a hunger crisis,” Donco said. “Entire communities in Buzi district are facing shortages of food, clean water, shelter and the means of earning an income.”

Hunger is hitting women hardest as they are usually the last in a family to eat. Even before the cyclones, poverty rates in the areas affected by Idai were higher than the national average.

José Mucote, Director of AJOAGO, one of the local organisations working with Oxfam, said: “We were already grappling with a drought in the south, when Cyclone Idai and the floods struck central Mozambique. Each disaster is making people poorer by the day and more vulnerable to whatever may come next.”

The Sofala region in central Mozambique was heavily hit by the cyclone and flooding which partially or totally destroyed land and crops of almost half a million families. Across dozens of sites for those displaced by the cyclone, thousands of people are relying on aid to survive. The lean season is now approaching, and the next harvest will only take place in March or April next year.

As the intensity and frequency of natural hazards has increased because of the climate crisis, the people of Mozambique are left wondering whether the next rainy season will bring more flooding or another drought and how they can ensure the safety of their families and protect their livelihoods.
//Ends

In response to Cyclones Idai and Kenneth, COSACA humanitarian consortium (consisting of Oxfam in Mozambique, Save the Children International and Care International) has to date reached over 600,000 people in Sofala, Manica, Tete, Zambezia, and Cabo Delgado provinces. COSACA response teams are helping people with food, shelter, water and sanitation, and education and are prioritising the needs of women and girls.

According to the revised UN Humanitarian Response Plan, which was released this week [12 September] 2.6m people still need humanitarian assistance in Mozambique and 2m people are going hungry after Cyclones Idai and Kenneth. The pervious plan released in March reported 1.6m facing hunger.