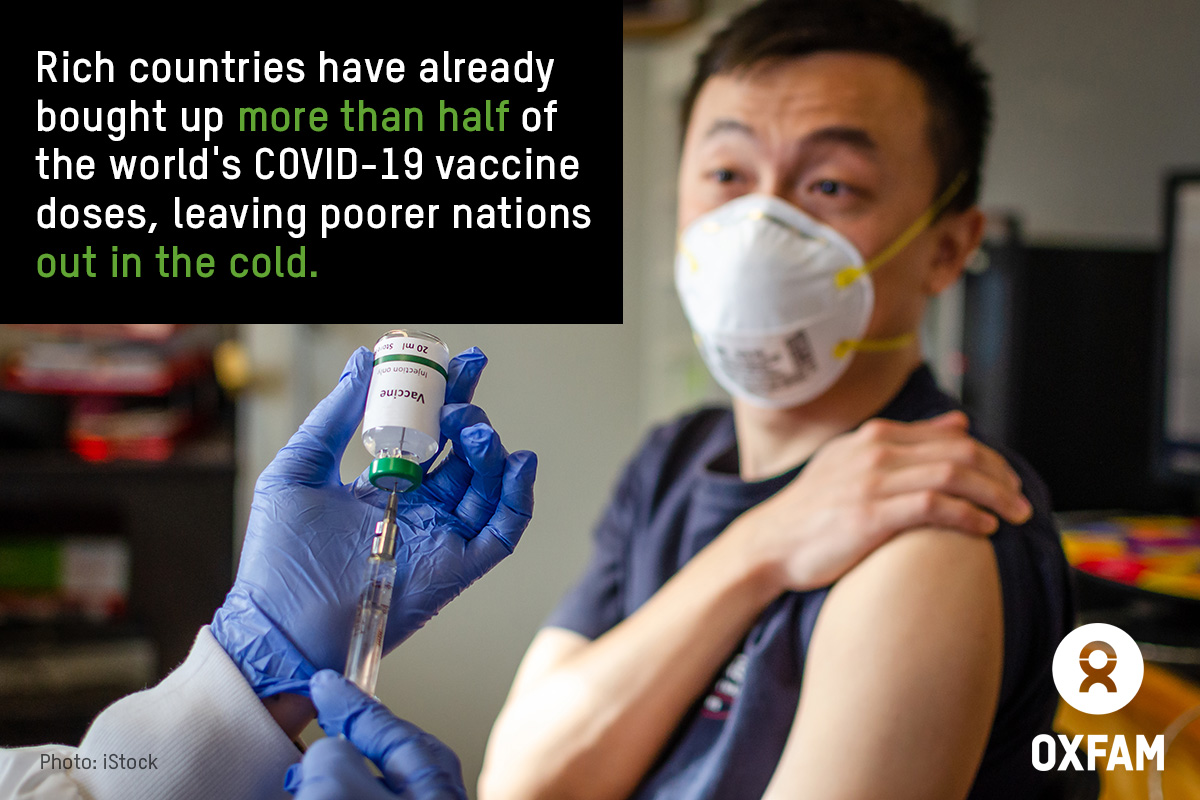 Wealthy nations representing just 13 percent of the world’s population have already cornered more than half (51 percent) of the promised doses of leading COVID-19 vaccine candidates, Oxfam warned today as the health and finance ministers of G20 countries meet to discuss the global pandemic.

Oxfam analysed the deals that pharmaceutical corporations and vaccine producers have already struck with nations around the world for the five leading vaccine candidates currently in phase 3 clinical trials, based on data collected by Airfinity.

The international agency also warned that the same companies simply do not have the capacity to make enough vaccines for everyone who needs one. Even in the extremely unlikely event that all five vaccines succeed, nearly two thirds (61%) of the world’s population will not have a vaccine until at least 2022. It’s far more likely some of these experiments will fail, leaving the number of people without access even higher.

Anna Marriott, Health Policy Advisor at Oxfam, said: “These figures reveal how pharmaceutical monopolies are being protected at the expense of people’s health and the global economy. While countries like the UK are understandably concerned about securing enough doses, until they challenge monopolies these deals will leave many poorer nations out in the cold. Most importantly, we will never be able to produce a vaccine at the scale required until corporations share their knowledge free from patents. We need a People’s Vaccine, not a profit vaccine.”

The calculations expose a broken system that protects the monopolies and profits of pharmaceutical corporations and favours wealthy nations, while artificially restricting production and leaving most of the world’s population waiting longer than necessary for a vaccine.

One of the leading vaccine candidates, developed by Moderna, has received $2.48 billion in committed taxpayer’s money. The company has said it intends to make a profit from its vaccine and has sold the options for all of its supply to rich nations – at prices that range from $12-16 per dose in the US to around $35 per dose for other countries – putting protection out of reach for many people living in poverty. While it may be making real efforts to scale up supply, according to reports, the company only has the capacity in place to produce enough for 475 million people, or 6 percent of the world’s population.

Oxfam and other organisations across the world are calling for a People’s Vaccine – available to everyone, free of charge and distributed fairly based on need. This will only be possible if pharmaceutical corporations allow vaccines to be produced as widely as possible by freely sharing their knowledge free of patents, instead of protecting their monopolies and selling to the highest bidder.

There are also large differences in the willingness of pharmaceutical companies to set aside supply for poorer nations. While Moderna has so far pledged doses of its vaccine exclusively to rich countries, AstraZeneca has pledged two-thirds (66 percent) of doses to developing countries. Although AstraZeneca has done most to expand its production capacity by partnering with and transferring its technology to other manufacturers, it could still only supply up to 38 percent of the global population, and only half of this if its vaccine requires two doses.

Winnie Byanyima, Executive Director of UNAIDS and Under-Secretary General, said: “We in the AIDS movement have seen in the past how corporations use monopolies to artificially restrict supplies of life-saving medicines and inflate their prices. UNAIDS and other members of the People’s Vaccine Alliance are calling for a new approach that puts public health first by sharing knowledge and maximising supply. Anything short of that will lead to more deaths and economic chaos, forcing millions into destitution.”

The estimated cost of providing a vaccine for everyone on Earth is less than 1 percent of the projected cost of COVID-19 to the global economy. The economic case for requiring pharmaceutical companies to share their vaccine knowledge free of patents so that production can be scaled up as fast as possible could not be clearer, the agency said.

For more information or to arrange interview, please contact: media@peoplesvaccine.org

Nine COVID-19 vaccines are currently going through phase 3 clinical trials, of which supply deals have been made public for five. These vaccines are being developed by AstraZeneca, Gamaleya/Sputnik, Moderna, Pfizer and Sinovac. Data on vaccine supply and production has been provided by Airfinity, the data and science analytics company https://www.airfinity.com/

Oxfam calculated the combined production capacity of these five vaccine candidates at 5.94 billion doses, enough for 2.97 billion people given that all five future vaccines will or are highly likely to require two doses. Supply deals have already been agreed for 5.303 billion doses, of which 2.728 billion (51 percent) have been bought by developed countries including the UK, US, Australia, Hong Kong & Macau, Japan, Switzerland and Israel, as well as the European Union. The remaining 2.575 billion doses have been bought by or promised to developing countries including India, Bangladesh, China, Brazil, Indonesia and Mexico among others. Included within the supply for developing countries are the 300 million doses of the AstraZeneca vaccine pledged to the Covax Advanced Market Commitment (AMC), the vaccine pooling mechanism. To avoid double counting we have assumed the recent additional agreement between the AMC and the Serum Institute of India to ‘accelerate’ the production of 100 million AstraZeneca or Novavax vaccines is already captured within those companies’ respective supply deals with the Serum Institute.

The calculation for the UK is based on Airfinity’s data and includes all of the UK’s published vaccine deals. The calculation for Bangladesh is based on the country’s share of the doses currently available under the Covax AMC, and would be the same for all 92 AMC eligible countries if the vaccine is distributed evenly.

The People’s Vaccine Alliance is a coalition of organisations and activists united under a common aim of campaigning for a ‘people’s vaccine’ for COVID-19 that is based on shared knowledge and is freely available to everyone everywhere. The alliance is calling on pharmaceutical corporations to share all vaccine knowledge with other companies and research institutions, including through the COVID-19 Technology Access Pool (C-TAP).

The IMF’s latest World Economic Outlook from June 2020 projected the cumulative loss to the global economy for 2020 and 2021 at $12 trillion. Using data provided by the Access to Covid-19 Tools (ACT) Accelerator, Oxfam has calculated that the estimated cost to research, make, procure and distribute a vaccine to everyone on the planet could cost $70.6 billion. Therefore, the cost of providing a vaccine for everyone on Earth is equivalent to 0.59% of cost of COVID-19 to the global economy.