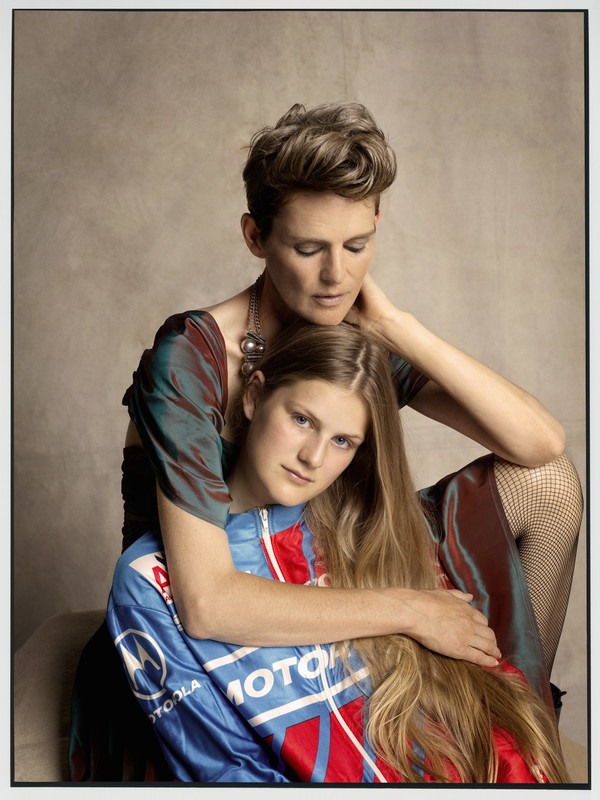 Supermodel Stella Tennant and her teenage daughter Iris, 14, model Oxfam clothes in a gorgeous photoshoot to protest against the harm fast fashion does to people and planet. Download pictures here.

The mother and daughter are supporting Oxfam’s  #SecondHandSeptember campaign which asks the nation to pledge to buy second-hand fashion instead of new for 30 days.  All the clothes in the shoot are from the Oxfam Online Shop.

The textile industry produces more greenhouse gas emissions than the shipping and aviation industries combined. To keep prices low, throwaway fashion is made by garment workers often from the world’s poorest communities, and paid below the living wage.

Stella Tennant said: “I’ve worked in the fashion industry for 25 years and it’s clear to me that nowadays we all have to think a lot harder about how we consume. The fast fashion industry is unsustainable, but we can slow it down by buying more second-hand clothes.

“I love Oxfam because it does two things at once: It gives clothes a new life and it helps the poorest people in the world.

“There is so much potential and fun to be had by shopping in a charity shop.  And £10 you spend on a dress in Oxfam could buy clean water for 10 people. It’s a win-win situation all round.”

The climate emergency concerns Iris, who turns 15 in September and has pledged to go shopping with her mum for second-hand birthday presents rather than new.

Iris said: “My birthday is in Second Hand September and I’m going shopping in second-hand clothes shops because you can find some really nice stuff. My generation often wants the newest, latest things.  But that causes problems for people in other countries and the planet. What’s good about shopping in charity shops is you know the clothes are not making climate change worse. I’m also going to go through my drawers and give anything I don’t want to charity.”

Each week, 11 million garments end up in landfill in the UK. But Oxfam’s unique recycling centre, Wastesaver in West Yorkshire, ensures none of the textiles donated to Oxfam end up in landfill as they are resold or recycled to generate income for Oxfam’s work to end poverty and injustice around the world.

For example, Oxfam fashion, which is all donated, raises money to help the world’s poorest people access the basics in life like clean water and fights for their right to be paid a fair wage and protected against climate change.

Oxfam’s sustainable fashion expert Fee Gilfeather said: “These pictures of mother and daughter are so lovely and tender, and we thank Stella and Iris for supporting Oxfam’s Second Hand September campaign. Oxfam fashion is for every age, and extra special since it raises money to fight poverty around the world.

“The harm throwaway fashion is doing to our planet and people is a worry for us all. But it’s especially alarming for the young generation who will increasingly suffer the effects of the climate crisis, and the world’s poorest communities whose lives are already being devastated by extreme and unpredictable weather.

“We need to rethink the way we consume now. Oxfam fashion is a solution as it slows the relentless consumer cycle by giving garments a second chance to be sold.

“Everyone taking part in Second Hand September is saying they don’t always need new stuff to look and feel good. And they don’t want garment workers to be paid poverty wages to produce fast fashion that often ends up in landfill.”

The fashion shoot was shot by photographer Tom Craig and styled by Oxfam’s Senior Independent Fashion Advisor Bay Garnett.  All the clothes and accessories are from Oxfam high street shops and the Oxfam Online Shop.

For anyone still thinking twice about choosing to shop for second-hand, Iris said: “When I’m in a changing room putting on something new, I know plenty of other people have tried it on before me. The main difference is that when you walk into a charity shop there is normally something for everyone. It’s not one person’s look and style.”

To find out more about Oxfam’s Second Hand September campaign and pledge to buy second-hand fashion for 30 days go to  po.st/SecondHandSeptember

For social media use: #SecondHandSeptember @oxfamgb

Bay Garnett is a British stylist, editor and consultant. She was one of the first fashion editors to pair elusive couture creations with accessible charity shop treasures in shoots for Vogue. Credited with pioneering “thrifting”, Bay and Kira Jolliffe founded the anti-fashion magazines Cheap Date and Fanpages, and co-authored the book The Cheap Date Guide To Style. Bay is currently Fashion Director at Large of ES Magazine. She has also worked as a photographer, shooting for Vogue and ES Magazine and consults for luxury fashion houses including Chloe and Louis VUITTON. Bay has also designed collections for M.i.H Jeans and merchandise for Fan Pages. www.baygarnett.com

Tom Craig is an intrepid and celebrated photographer with a unique look championed by iconic establishments such as Vogue, i-D, Net-a-Porter, Louis Vuitton and Vanity Fair. Tom is very much into the craft of photography, driven by a necessity to tell stories and an urge to travel. His rich and filmic pictures are rare in that they live both in a world of fashion and of real reportage photography. Some kind of lust for life and light has meant his transition from stills to moving image has proved seamless.

Oxfam fashion fights poverty: Every garment sold in Oxfam’s shops on the high street and online helps beat poverty. One dress could raise enough money to provide a woman in Bangladesh with a safe bathing cubicle, a shirt could provide safe, clean water for 10 people in an emergency, and a coat could help train two farmers in Rwanda to better cope with extreme weather conditions. Last year, Oxfam shops raised almost £19 million for its work fighting poverty around the world – that’s life-changing. Oxfam’s pioneering recycling hub Wastesaver saves more than 12,000 tonnes of clothing from going into landfill every year.