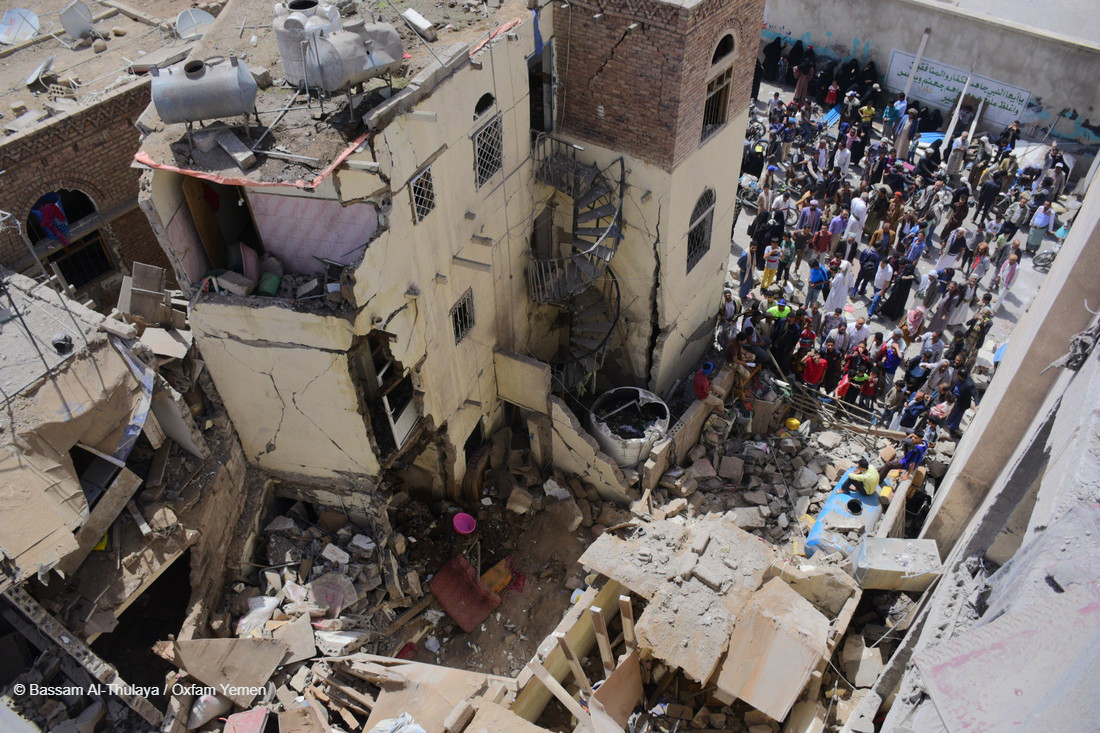 Destruction of civilian houses in Sana'a

The value of UK arms licenced to members of the Saudi Arabia-led coalition in the five years since the Arms Trade Treaty (ATT) came into effect is 45 per cent higher than the preceding five years – an extra £2 billion worth of arms, Oxfam has calculated.

For all but three months of that time, Saudi Arabia, the United Arab Emirates and their coalition partners have been involved in the conflict in Yemen, in which more than 12,000 civilians have been killed.

Fighting in Yemen – fuelled by international arms sales – has created the biggest humanitarian crisis in the world and is impeding efforts to help civilians. Oxfam had to suspend operations this weekend in Al Dhale’e after its office there was hit by rocket-propelled grenades (RPGs) on Sunday, affecting aid to 15,000 people in the area. There is no suggestion of British arms being used in this incident.

Of the £6.4bn, £3bn was for aircraft, helicopters and drones and £2.6bn was for items including grenades, bombs and missiles. In addition, the UK also granted 385 open licences to coalition members between January 2015 and December 2019 which allow the holders to export an unlimited quantity of goods.

The UK government campaigned hard for the ATT, which was created to regulate the international arms industry and which came into force on 24th December 2014. It is intended to ensure no arms transfer is permitted if there is a substantial risk that it could be used in serious violations of international human rights or humanitarian law.

Ruth Tanner, Oxfam’s Head of Humanitarian Campaigns said: “Just a few years ago, the UK government enthusiastically pursued the introduction of legislation to better control arms transfers to avoid the kind of indiscriminate violence that has been unleashed on civilians in Yemen.

“And yet now the UK is doing all it can to avoid suspending arms sales to Saudi Arabia and its coalition partners.

“This rise in arms sales should be a stain on our conscience. The Yemenis who’ve had to flee their homes, go without food and clean water, and endure outbreaks of disease need an end to this war and a chance to rebuild their lives.”

In its ruling earlier this year, that arms sales to Saudi Arabia were unlawful, the Court of Appeal explicitly noted the discovery of a fragment of a UK-supplied bomb at the site of an attack on Abs Hospital in Hajjah governorate in which 19 civilians were killed and 24 injured.

The UK government has indicated that it will appeal the outcome of that ruling in the Supreme Court.

On 22 December, at around 1am, Oxfam’s office in Al Dhale’e was attacked by two RPGs. One hit the roof, while the other hit the office gate. Neither of the guards on duty were injured and there were no other staff present. The offices of several other agencies in Al Dhale’e were also targeted at around the same time.

The introduction of an Arms Trade Treaty was backed by successive UK governments including under the leadership of Tony Blair, Gordon Brown and David Cameron.

Oxfam has been working in Al Dhale’e to provide people with equitable and safe access to water and sanitation services, cash assistance and food vouchers, as well as helping to build resilient livelihoods to cope with the impact of the conflict.