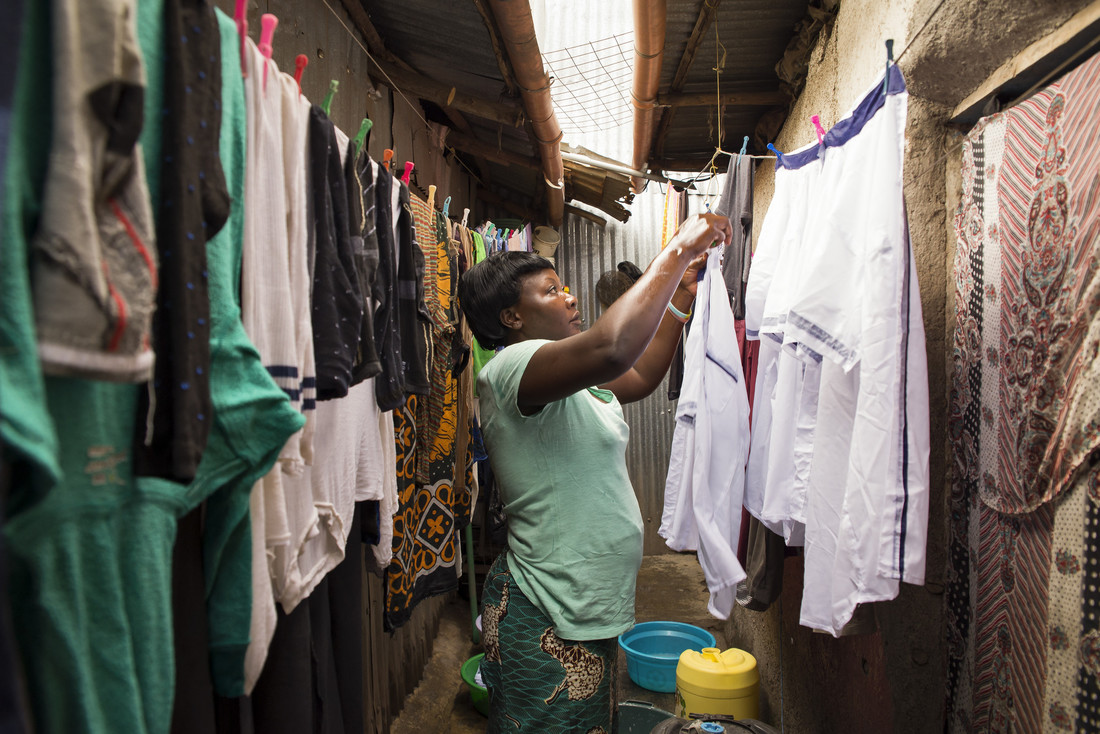 The 22 richest men in the world have more wealth than all 325 million women in Africa, Oxfam revealed today ahead of the World Economic Forum in Davos. A new report illustrates how inequality continues to be at crisis levels with wealth valued over work and the contribution of women under-rewarded.

Time to Care, which is published on the same day that London hosts the UK African Investment Summit, sets out how the global economy fails to adequately reward those who carry out care work, a situation which exacerbates the gap between rich and poor. Extreme inequality is trapping millions of people in poverty around the world – although estimates of the wealth of the world’s poorest have been revised upwards this year, half the world’s population continue to live on less than $5.50-a-day and women in particular get a raw deal.

Women and girls are putting in 12.5 billion hours of unpaid care work every day, such as looking after children and the elderly, which amounts to a contribution to the global economy of at least $10.8 trillion a year – more than three times the size of the global tech industry. Women, especially those living in poverty, do more than three-quarters of all unpaid care work. 42 per cent of women are outside the paid workforce because of unpaid care responsibilities compared to just six per cent of men. Countless more are paid poverty wages for care work.

Danny Sriskandarajah, Oxfam GB Chief Executive, said: “When 22 men have more wealth than all the women in Africa combined, it’s clear that our economy is just plain sexist.

“One way that our upside-down economic system deepens inequality is by chronically undervaluing care work – usually done by women, who are often left little time to get an education, earn a decent living or have a say in how our societies are run, and are therefore trapped in poverty.

“If world leaders meeting this week are serious about reducing poverty and inequality, they urgently need to invest in care and other public services that make life easier for those with care responsibilities, and tackle discrimination holding back women and girls.”

Oxfam’s report highlights how care work is radically under-valued and taken for granted by governments and business. It is often treated as non-work, with spending on care viewed as a cost rather than an investment, leading to care being rendered invisible in measures of economic progress and policy agendas. The report also looks at governments’ role in fuelling the inequality crisis, massively under-taxing the wealthiest individuals and corporations and underfunding vital public services and infrastructure that could help reduce women and girls’ workload.

Investments in water and sanitation, electricity, childcare and public healthcare could free up women’s time and improve their quality of life. Oxfam research has shown that providing access to an improved water source could save African women significant time, for example in parts of Zimbabwe up to four hours of work a day, or two months a year.

Oxfam is urging governments to create fairer fiscal systems and crack down on tax loopholes to raise the revenue needed to invest in national care systems and public services that meet everyone’s needs, without relying on unpaid and underpaid work by women.

Getting the richest one per cent to pay just 0.5 per cent extra tax on their wealth over the next 10 years could raise enough money to create 117m jobs, including 79 million in education, health and social care which would help close the current care gap.

The pressure on carers, both unpaid and paid, is set to grow in the coming decade as the global population grows and ages. An estimated 2.3 billion people will be in need of care by 2030, an increase of 200 million since 2015. Climate change could further increase the workload of carers; by 2025, up to 2.4 billion people will live in areas without enough water, and women and girls will have to walk even longer distances to fetch it.

Progress on care provision, and on a human economy, is possible. Uruguay’s ground-breaking national integrated care system has led the way in enshrining the right to be cared for and the right to care, as well as care workers’ labour rights. And ordinances in parts of the Philippines require the inclusion of unpaid care work in planning and budgeting processes and increasing access to safe water and childcare centres.

Photos can be downloaded here

Spokespeople are available for interviews in English, Arabic, French, Portuguese and Spanish.

The Time to Care report, summary and methodology document outlining how Oxfam calculated the statistics and the dataset is available here

Oxfam’s calculations are based on the most up-to-date and comprehensive data. In 2018, Oxfam calculated that 26 people had the same wealth as the poorest half of the world. In 2019 this figure is 162. The difference in numbers is mainly due to improved Credit Suisse estimates which suggest that wealth held by the bottom 50 per cent is higher than previously thought. Using these new estimates, the revised figure for last year is therefore not 26 but 155. Billionaire wealth also fell in the period covered by Oxfam’s calculations but has since significantly recovered, Bloomberg have just shown how 500 people last year got over a trillion dollars richer. While estimates of overall wealth and the wealth share of the bottom 50 per cent fluctuate from one year to the next, the overall picture of incredible levels of wealth inequality remains shockingly high.

The Prime Minister is hosting the UK African Investment Summit in London today. Oxfam is calling for meaningful engagement during and after the summit with African and UK civil society, particularly women’s rights organisations. As such inputs are vital in designing investment that would create good quality, well paid jobs for women. It’s vital that companies investing in the region pay their fair share of taxes and not use tax havens as a conduit for their African investments, so that African governments can invest in services and national care systems which reduce the unpaid care burden for women.

For more information or to arrange an interview, please contact Lisa Rutherford on 07917 791 836 / lrutherford@oxfam.org.uk