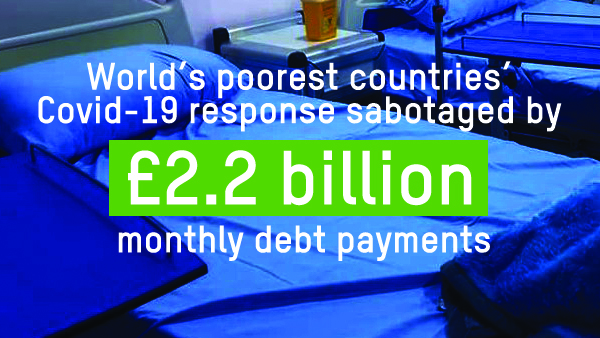 The world’s poorest countries are being burdened by monthly debt repayments totaling $2.8 billion, (£2.2 bn) as they struggle to respond to the Covid-19 crisis, despite a recent G20 initiative to tackle the problem, new research from Oxfam, Christian Aid and Global Justice Now revealed today.

Their report Passing the Buck on Debt Relief was published ahead of G20 Finance Ministers meeting this weekend and calls for debt relief to be extended to that held by private and multilateral creditors and to include both low-income and middle-income countries at risk of deep sovereign debt.

In April, the G20 agreed to a temporary suspension of debt payments for 73 of the world’s poorest countries, under the Debt Service Suspension Initiative (DSSI). However, it failed to include private creditors or multilateral development banks such as the World Bank. Countries which do apply face uncertainty regarding the impact on their credit rating and the future cost of financing their debt on international markets. Additionally, some middle-income countries are excluded from current debt relief efforts despite being unable to afford debt repayments.  Argentina, Ecuador and Lebanon have already defaulted this year.

Danny Sriskandarajah, Oxfam GB Chief Executive said “It cannot be right that at this time of crisis -with millions of people in desperate need of healthcare and social safety nets – countries are being forced to spend their scarce revenues on debt. Every dollar of debt repayment is a dollar that can’t be used to protect people from disease, hunger and destitution. If the G20 are serious about protecting the poorest from the pandemic’s economic fallout, it’s crucial that private and multilateral debt is included in the agreement.”

The 41 countries that have applied to the DSSI will potentially save up to $9 billion (£7.2bn) in bilateral debt repayments this year. This figure is, however, dwarfed by the remaining repayments of up to $33.7 billion (£26.9bn) faced by all 73 countries eligible for the initiative. This includes $25.4 billion (£20.3bn) owed to commercial banks, investment funds and multilateral institutions. The World Bank alone is owed $3.77 billion (£3.02bn). The total debt repayments of $2.8 billion (£2.2bn) per month is double the amount Uganda, Malawi and Zambia combined spend on their annual health budgets.

Countries including Ghana and Kenya, who could save $354 million (£283m) and $802 million (£641m) respectively in bilateral debt repayments, are fearful of joining the DSSI initiative due to the credit rating threat. Kenya has only 518 intensive care unit beds for a population of over 51 million people and hospitals are fast running out as the number of Covid-19 patients increases. Yet Kenya is spending more on servicing its debt than on public healthcare – about $2.7 billion (£2.16bn) this year, compared with a health budget of about $1.86 billion (£1.49bn) in 2018.

Matti Kohonen, Principal Private Sector Advisor at Christian Aid said ““It’s shocking that 45 countries spend more on servicing their debts than helping the poorest and most vulnerable in social protection.  The G20 governments need to include private sector bondholders in the G20 debt relief package on a mandatory basis, rather than passing the buck to others to help those most vulnerable during the Covid-19 pandemic.”

Nick Dearden Director at Global Justice Now said “Some of the wealthiest investors in the world have fuelled this debt crisis, helped by world leaders who have failed to properly regulate global debt markets. These investors are now pushing countries to put debt repayments ahead of their citizens’ healthcare. It’s time to say no, this debt cannot and should not be paid. Instead we need a new debt system which puts rights ahead of profits.”

The agencies are urging the G20 Finance Ministers to ensure that private sector creditors and multi-lateral development banks immediately match the terms of the debt suspension offered by the DSSI under a binding and compulsory scheme, they should also extend the scheme until the end of 2022 and pledge to pass legislation to stop private lenders and vulture funds from suing countries for defaulting on their debts.

Passing the Buck on Debt Relief, new research by Oxfam, Christian Aid and Global Justice Now can be downloaded here

In April, the World Bank’s Development Committee and the G20 Finance Ministers endorsed the Debt Service Suspension Initiative (DSSI), which allows 73 low-income countries eligible to the Bank’s International Development Association (IDA) to suspend principal or interest payments on their debts to G20 countries from May 1 through the end of 2020.

Virtually all international debt contracts are owed under UK or New York law. Roughly 90 per cent of the 73 eligible countries’ government external bonds are governed under English law, while New York is a popular jurisdiction for Latin American and Caribbean sovereign debt contracts. In 2010, the UK passed the Debt Relief (Developing Countries) Act which prevented countries from being sued by creditors who were not participating in a previous round of debt relief.