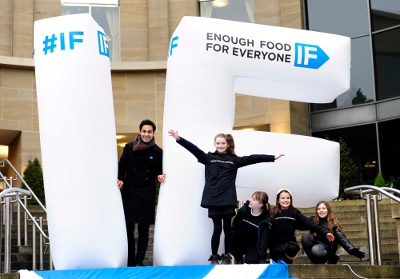 The biggest campaign against hunger ever launched in Scotland got off to a lively start in Glasgow yesterday.

The IF Campaign is a huge coalition of UK-based organisations, including Oxfam, who share the vision of a world where everyone has enough to eat.

We also have huge ambitions: to reach 20 million people across the UK with our message and inspire 5 million of them to get involved. Between now and the G8 in June, we’re joining forces to petition David Cameron relentlessly and every which way to use his presidency of the G8 to take a lead on hunger.

Yesterday, representatives of all the different groups involved in the campaign in Scotland came together with guests and members of the public.

Among the special guests were children from Whitelees Primary School of Rock in Cumbernauld. They played a specially-written song for the launch. Actor Atta Yaqub also came to show his support.

Atta said: “When I found out that one in eight people in the world are going hungry, I was shocked and angry. The IF campaign is a way of doing something about this terrible situation, and putting pressure on leaders at the G8. I’d encourage every Scot to sign up to the campaign.”

See lots of great images from the IF in Scotland launch here!

As well as putting pressure on the Government at Westminster and world leaders at the G8, the IF campaign in Scotland is also asking the Scottish Government and others to take action on hunger. The demands are all included in a special IF in Scotland manifesto.