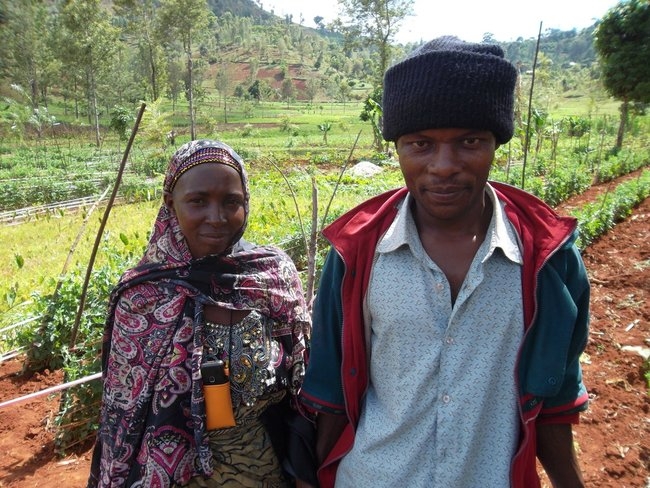 Life is hard – and very likely short – for Halima Shabani. Feeding and sending her children to school is a constant struggle. So too are her long, back-breaking, days in the fields.

But, high in the lush mountains of Lushoto in northern Tanzania, Halima’s life is changing – with Scottish help. She is one of thousands of small holder farmers involved in a new Scottish Government funded project which aims to secure sustainable livelihoods and better lives. And change is beginning to happen.

For the first time, Halima has a pipe bringing water direct into her home. Her children are now regularly going to school.

For Halima, change started with her decision to join the Oxfam project – and with it the decision to grow snow peas – better known in Scotland as mangetout. The crop has become a powerful symbol of a better life; one that’s possible and within reach. The reason is simple; the farmers who grow them are – for once – beginning to see the benefits.

80 per cent of Tanzanians rely on agriculture – the vast majority live below the poverty line. In Lushoto many families live on just £1 per day. That’s not because they don’t work hard – far from it; Halima walks four miles simply to reach her field each day. Her gruelling labour is simply under-valued by a supply chain that robs her of power.

Oxfam is working to develop alternative markets that reward farmers more fairly. Snow peas are the first such alternative within a Scottish Government funded project which is six months old. Within just three days the pods harvested in Lushoto will be on supermarket shelves in Belgium. In a globalised world, that may not sound surprising – but it’s entirely new for the farmers of Lushoto. And it’s made all the more incredible by the
vast distances involved and the area’s poor road network. Whilst far from a silver-bullet, snow peas are connecting farmers to a secure market – and to better futures.

The contrast is stark. In neighbouring fields, crops of peppers are being left to rot. When asked why they’ve not been harvested, the farmer’s response is resigned: “no market”. And that’s what makes the snow peas supply chain different. Working with a private sector exporter, the company and the farmers are making money from it. Profit – when it’s fair – isn’t an opponent to development; it’s often a vital factor in making it sustainable.

But too often, too little reward flows to the farmers themselves. Instead, they produce their crops, take it to their local market and rely on visiting traders to offer a fair deal. In this unequal power game, exploitation is rife – fuelled by the farmers’ lack of organisation and market knowledge. And this is where the real change is happening. By increasing the farmers’ knowledge of how the market works, as well as their role within it, this project is reducing the ability of ‘middle men’ to deny them a just price. They must come together to
plan their production and to learn when, and how, to farm to ensure a crop of sufficient quality for export.

In a nearby school, the benches are packed as farmers hear about ‘good agricultural practice’.It’s a session again made possible by Scottish funding. The farmers take feverish notes knowing that – put into action – the tips mean better crops and bigger returns. The 60 day growing season for snow peas allows for as many as six crops per year. This regularity of income slashes the risk created by slower growing crops and allows for
constant improvement. In such ways, traditional farmers are being transformed into entrepreneurs.

But, as ever, power comes through weight of numbers. Farmers are joining the project’s groups, and forming their own associations – increasing their voice and bargaining power. Such structures are also crucial to the flow of information across vast areas and thousands of individual farmers.

At one meeting, a group of leaders is agreeing their all-important constitution. The role of women is made a priority; at least 50 per cent of members must be female. In Tanzania, agriculture is seen as women’s work. In a nearby field a women pauses to breast-feed the child strapped to her back.Between downward strokes of her wooden hoe she reveals, with a tired smile, the girl is just a month old. Maternity leave doesn’t exist for the farmers of Lushoto – there are mouths to feed.

But while women do much – indeed most – of the farming, they are too often locked out of decision-making. Yet Oxfam’s experience reveals real change only happens when women are involved at all levels. When men and women learn together, and work together, the gains are greatest.

With the association’s constitution agreed, a male farmer in his fifties raises his hand. “I want to express our thanks to Scotland for the money it has invested in us” he says. “We are thankful to the Scottish Government, but also to the people of Scotland.”

Back in her field, Halima picks her latest crop of snow peas alongside her husband Ratibu. This project won’t end her struggle overnight, but she harvests with the certainty of an income to come.

Around her neck dangles a mobile phone – another new, and crucial, tool in this entrepreneur’s armoury. A month from now a text message will deliver Halima’s payment. Fair reward for fair work.

By then her next crop will be well underway.