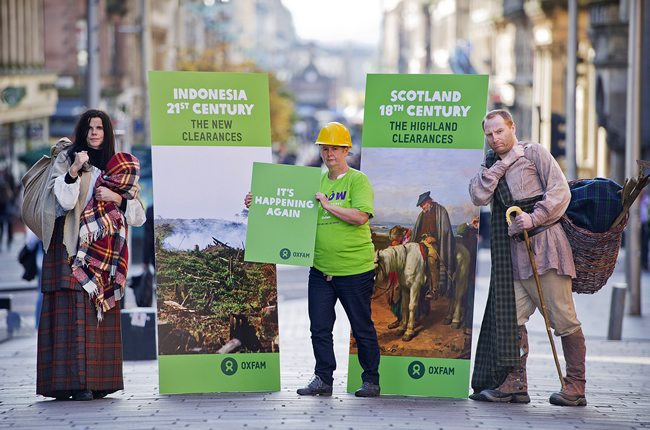 An Oxfam report has revealed that investors are targeting poorly governed countries, looking to secure land cheaply and quickly. Here, former First Minister Lord Jack McConnell writes about the need for an end to these land grabs that cause poverty and hunger.

It has been 200 years since the notorious Highland Clearances which caused much misery and hardship to Scots forced from their land. But, today, (Feb 7) an international day of action is being held to highlight the modern day land grabs that are separating people from the land they need to live and work.

Back home in Arran I pass by our own island’s memorial to the Clearances every day. Families were ripped away from their homes and stripped of their livelihoods and the Clearances remain a byword for cruelty. Many moved from the Highlands to the Lowlands but, for many more, journeys from the West coast saw them leave these lands forever. As they made new lives in North America and elsewhere, their departure left a void in Scotland.

Depopulation, emigration and unjust abuse of land ownership carried on in Scotland until the creation of our new Parliament in 1999. Only then did we abolish Feudal Tenure of land and reform the use and ownership of land in the interests of those who live and work in rural Scotland.

And only then did we take real action to develop Scotland as a country of in-migration, attracting fresh talent and retaining local talent too. Scotland has moved on from the divisive events of the 18thand 19th Centuries. But right now, something all too similar is happening in some of the poorest countries in the world.

An unprecedented rush for land has not been adequately regulated to prevent land grabs, meaning that many poor communities are being evicted without any consultation or compensation.

These land grabs can be violent and can leave people homeless, without access to the land they need to grow food to eat and make a living.

They are happening at such a frenetic pace across developing countries that the UN’s head of Food and Agriculture says the situation resembles the ‘Wild West’. According to Oxfam, poor countries lose an area the size of a football pitch to these deals every second.

A report by the international development agency says land 26 times the size of Scotland was sold off globally between 2000 and 2010 – that land could grow food for one billion people.

Now a new Oxfam report, issued today to coincide with a global day of action, warns that investors are targeting the world’s weakest-governed countries to buy land. Poor governance is good business for those who want to secure land cheaply and quickly.

Most land sales are taking place across Africa, in countries with serious hunger problems and two-thirds of investors plan to export what they produce, meaning they are doing little to improve local food security.

In addition, nearly 60 percent of land deals have been to grow crops that can be used for biofuels – diverting food from people’s stomachs to petrol tanks. All of this threatens to perpetuate the cruel irony of a rich continent full of poor people.

This global land rush is out of control – people cannot break free of poverty if they are thrown off their land and denied the means to support themselves.

Oxfam is calling on the World Bank to temporarily freeze land investments so that it can ensure its policies do not encourage land grabs. Getting a grip on the modern day land rush must be a priority for the Bank, which is in a unique position to act because it sets international standards for land investments and provides finance for deals.

This is also now a key issue for the Enough Food For Everyone IF campaign, a 100-strong coalition of aid agencies and faith groups who want an end to poor farmers being forced off their land. They instead want the available agricultural areas to be used to grow much needed food for people.

Not all investment in developing countries is bad but we must ensure it empowers, rather than harms, some of the world’s poorest people. Then investment can be a catalyst for development, helping realise the potential of the people.