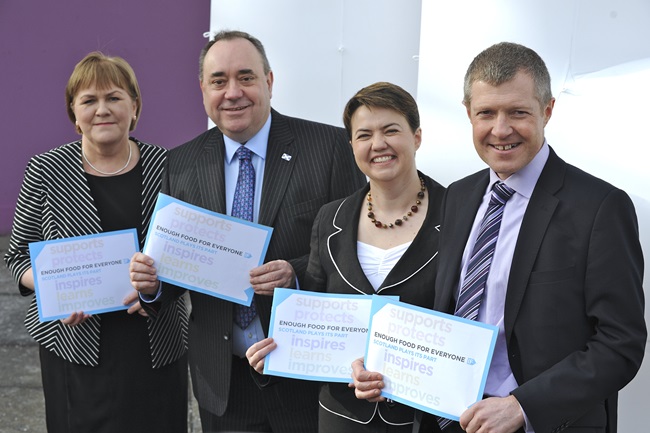 Political party leaders have shown their support for Scotland’s biggest ever campaign on global hunger, ‘Enough Food for Everyone IF’. The year-long campaign is organised by a coalition of leading international development charities and faith groups, including Oxfam.

Yesterday at Holyrood the party leaders were presented with the IF Scottish Manifesto which outlines how Scotland can play its part in creating a world free from hunger.

The five key areas are land, tax, aid, transparency and education and the campaign calls on Scotland’s politicians, institutions, organisations, faith groups, private companies and individuals to reflect on their role in tackling global hunger and to take action.

There is enough food for everyone in the world but one in eight people around the world will go to bed hungry tonight. The IF campaign believes this is unfair, it’s unjust, and it’s totally preventable.

First Minister Alex Salmond MSP said: “For any human being on the planet, statistics like that beggar the imagination and also must grab at the heart. I think the IF campaign is spot on and we’ll be giving it huge consideration in supporting it. I think the IF campaign is worthy of support. I hope it will be done on a cross party basis and indeed on an all Scotland basis”.

Scottish Labour Leader Johann Lamont MSP said her party would support the recommendations of the IF campaign, adding: “Wherever we are represented we will try to make sure that the needs of the hungriest are at the front of political leaders considerations. I think anyone who is a mother, a sister, an auntie thinks about the idea that a child could be going to bed hungry. It’s such a basic need and the idea that one in eight people in the world are going to bed hungry should be a spur to all of us”.

Ruth Davidson leader of the Scottish Conservatives said: “I think Scotland should play its part in helping tackling hunger worldwide. We have an international development fund. We can help put that to help combat hunger around the world. We can also help through education too and help teach young people about some of the inequalities in the world and how we can help to tackle it”.

When asked whether Scotland should play its part, Scottish Liberal Democrat leader Willie Rennie said: “Yes we should but it shouldn’t be tokenistic. There should be substantial contributions both financially and educationally, so that everyone in Scotland, not just politicians – but everybody – takes part in the campaign. Yes, we’ll support the IF Campaign because it’s a good campaign. I think it’s a positive thing that could make a difference. The Liberal Democrats are right behind this campaign”.

Scotland’s voice must be heard at Westminster, the G8 and across the world as part of the UK-wide Enough Food For Everyone IF campaign. But Scotland itself can also play a part in ensuring that every family and every child has a life free from hunger:

•IF Scotland supports: we should build on Scotland’s commitment to international development by maintaining and increasing the International Development Fund and the Scottish Climate Justice Fund.

•IF Scotland protects: we should actively support fair and ethical trading, as well as tax transparency, through what we buy.

•IF Scotland inspires: we should use our own history of the Highland Clearances to contribute to the global debate on land rights for people in developing countries.

•IF Scotland learns: we should invest in global citizenship education for children, young people and adults, so they better understand the issue of hunger and their role in tackling it.

•IF Scotland improves: we should assess Scotland’s impact on developing countries and improve our response.

Judith Robertson, Head of Oxfam Scotland and a spokesperson for the IF campaign, said: “The IF campaign is calling for action at the G8 and from the UK Government, but there is also much we can do in Scotland to play our part in tackling hunger.

“For example the Scottish Government could increase its support for the poorest communities suffering the effects of climate change, which often leads to hunger.

“It could choose to award public contracts to companies that don’t dodge their taxes in developing countries.

“It could tap into Scotland’s experiences of the Highland Clearances to hold a Global Land Summit on the huge problems caused to poor subsistence farmers by land grabbing.

“We welcome the interest shown by the four party leaders today and look forward to working with them on these important issues over the coming months. It’s also vital that people in Scotland get involved in the campaign to provide the politicians with the impetus to act”.

To find out more about the campaign visit https://enoughfoodif.org/oxfam

Copies of the Scottish manifesto can be downloaded at www.enoughfoodif.org/scotland