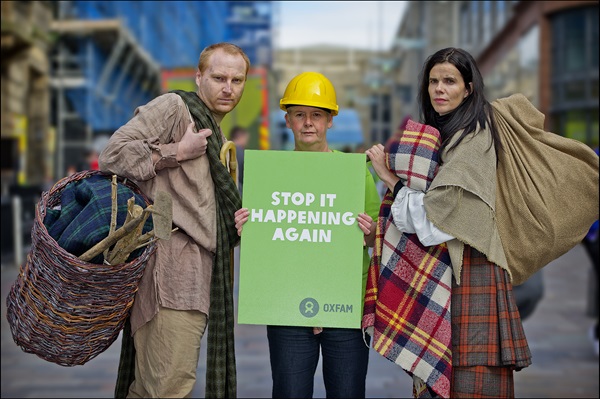 A new poll reveals 68% of Scots are concerned about a wave of land grabs that some campaigners believe have parallels to the Highland Clearances taking place in developing countries.

Nearly two-thirds (65%) of Scots believe the trend, which sees an area of land equivalent to Loch Ness snapped up by investors every 5 hours in poorer countries, has echoes to Scotland’s land story.

The poll of more than a thousand Scots was conducted by Research Now for the Enough Food For Everyone IF campaign, a coalition of nearly 150 organisations across the UK which is calling for action to help end the scandal of hunger.

The release of the research coincides with a major seminar in Helmsdale today to mark the bicentenary of the Sutherland Clearances, one of the most violent phases of the wider Highland Clearances.

The seminar will discuss how Scottish history can influence the global debate on land rights in order to protect the world’s poorest people.

The new research, which polled 1,016 people in Scotland, also suggests that a clear majority (59%) of Scots want the Scottish Government to play a role in fighting land grabs.

The IF Campaign is calling on the Scottish Government to leverage Scotland’s own history of land grabs by hosting a Global Land Hearing to give voice to communities facing modern day clearances.

Judith Robertson, a spokesperson for the IF Campaign, said: “Right now, 870 million people – one in eight – are going hungry. We believe land grabs are making the situation worse.

: “Right now, 870 million people – one in eight – are going hungry. We believe land grabs are making the situation worse.

“Research suggests investors are snapping up land in countries with the weakest governance and it is those who use the land, including small-scale farmers, who are losing out most.

“In developing countries land 26 times the size of Scotland was sold off between 2001 and 2010 – it’s estimated this land could have grown food for a billion people.

“Poor families are often evicted without fair treatment or compensation. Yet the cruel irony is that two-thirds of agricultural land-deals by foreign investors are in countries with a serious hunger problem.”

The IF Campaign wants Prime Minister David Cameron to use the UK’s Presidency of the G8 to put the issue on the agenda at the upcoming summit in Northern Ireland in June.

However, the campaign believes Scotland should also play its part in tackling this issue.

: “Scotland’s land story has global resonance, giving us a powerful and credible voice in the global land debate.

“There are clear parallels between the turbulent events of Scotland’s past and the reality right now for many people in developing countries.

“We believe Scotland should use this story to help protect some of the world’s poorest people.

“It is encouraging to see such widespread support from the Scottish public. We urge the Scottish Government to seize this opportunity to amplify the voices of the communities affected.”

During the 19th century, the Highlands and Islands saw significant de-population as landlords turned to sheep farming. In some areas, including Sutherland, there were forced evictions.

In 2007, Alex Salmond unveiled the Emigrants Statue in Helmsdale in tribute to those who left during the Clearances. He described the Clearances as “a dark” chapter in Scotland’s history and urged people not to forget “the legacy they have left behind – both in Scotland and around the world”.

Anna Vermehren, Director of Timespan Museum and Arts Centre, said: “2013 marks the anniversary of the Kildonan Clearances of 1813 which we are commemorating in Helmsdale this year. Our ‘Translocation’ project offers the chance to reflect on the events that happened.

“2013 marks the anniversary of the Kildonan Clearances of 1813 which we are commemorating in Helmsdale this year. Our ‘Translocation’ project offers the chance to reflect on the events that happened.

“In this part of the country the Clearances seem as if they happened yesterday. They are still alive in the memory of the people who live here and visible in the empty lands that were left 200 years ago.

“The historic significance of the evictions of hundreds of people from our strath is still apparent to this day.

“This event will give us the opportunity to understand the Clearances of today in the context of what has happened in the past. From so-called ‘Improvements’ to ‘Clearances’ and land grabs, the issue of migration and dislocation is current.

“We’re delighted to support the IF campaign by facilitating this event and to work with it to highlight land grabs in light of the Clearances.”

The IF Scotland manifesto can be read here: https://enoughfoodif.org/sites/default/files/IF_Scotland_manifesto.pdf

65% of the Scottish population agreed that land grabs across the world today have parallels to the Highland Clearances (with 20% strongly agreeing). Only 11% of the population disagreed that land grabs today have parallels with Highland Clearances (of which just 5% strongly disagreed) and 18% said they “neither agree nor disagree”.

59% of all Scots said they want the Scottish Government to play a role in fighting land grabs.