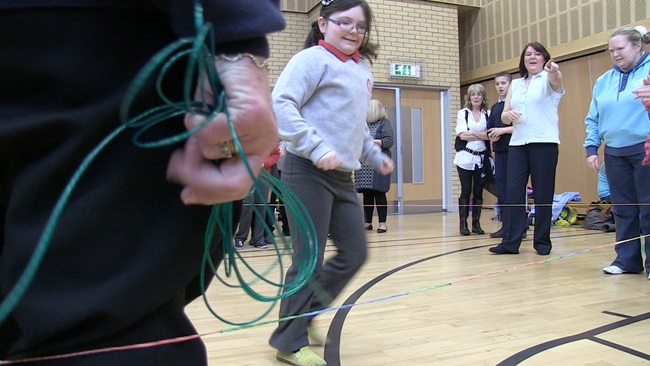 A group of Govan women taught traditional playground games like Balls and Elastics to a new generation of youngsters to mark International Women’s Day.

The women visited the Govan school campus in Glasgow on Friday 8 March to show the ropes to children from Riverside Primary School and St Saviour’s Primary School.

For generations, Glasgow playgrounds were filled with girls playing Balls. They would bounce tennis balls or rubber balls against a wall, doing complicated moves and singing songs in time with the movement.

Elastics was another favourite, with one girl jumping in and out of elastic bands stretched between the legs of two other girls.  As the game went on, the elastics would be raised higher and higher, making it more difficult for the jumper.

But over the years, the traditional games have begun to be played less and less.

Heather McMillan, Project Manager of Sunny Govan Community Radio, came up with the idea for the event.

Heather said: “We had a young woman who was 16-years-old volunteering with us recently. She told me she played football and we started talking about women’s sport. I mentioned playing Balls to her and she didn’t know what I was talking about. But when she mentioned it to her mother, she knew straight away.

“After that, I talked about it with other women in Govan, and lots of them started singing the songs and making the hand movements as if they had stopped playing just yesterday. So we decided it would be a good idea to show these games to young people in Govan today.

As well as some of the women volunteers from Sunny Govan, women from the Tea In The Pot women’s drop-in centre in Govan are taking part, along with women from the GalGael Trust, the Beads And Blether women’s group and the Linthouse Parish Church Line Dancing Group.

Sunny Govan, Tea in the Pot and GalGael are all partners of Oxfam Scotland. Oxfam supporters across Scotland and the UK are also celebrated International Women’s Day with a series of Get Together events. All the money raised is used to help women around the world escape poverty.

Judith Robertson, Head of Oxfam Scotland, said: “It’s great that the Govan women are passing on their knowledge and heritage to a new generation.

“Across the world, Oxfam helps women put their knowledge and skills to practical use, allowing them to build sustainable livelihoods for themselves and their families.

“Ending the inequality that women face is vital if we want to tackle hunger and poverty. International Women’s Day helps us put that issue on the agenda.”