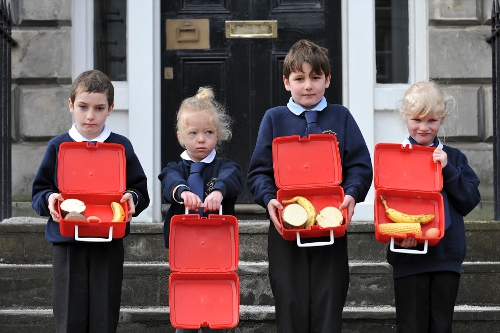 Primary school children from East Lothian today challenged the Chancellor to keep the UK’s promises on aid in this year’s budget.

The eight children from Wallyford Primary School, dressed in their ‘Chancellor’ shirts and ties, marched with their red Budget sandwich boxes to the Scotland Office to show that one of the boxes was empty, highlighting that one in eight people in the world still go hungry.

The stunt – staged by the Enough Food for Everyone IF Campaign – comes as the Chancellor puts his finishing touches to his 2013 budget, where it is hoped he will confirm the UK’s commitment to allocate 0.7% of GDP to life saving aid, which was first promised in 1970.

Aid has contributed to improving education, health, sanitation and other public services in many of the world’s poorest countries. This investment in human capital is the fundamental basis for development and self-sufficiency in the future.

Chris Hegarty, speaking on behalf of the IF Campaign said: “Our stunt today highlights the remarkable progress of British aid and what it is helping to achieve for the world’s poorest people.

“Giving children the opportunity to live, to learn and to thrive will be of enormous benefit to the UK in the long term. Aid is working and Britain deserves enormous credit for delivering on its promise to the poorest, hungriest, and most vulnerable people in the world.”