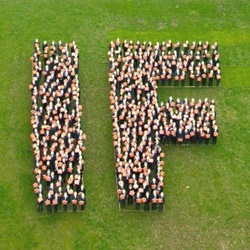 Three of us from the Glasgow Campaigns Group travelled down to London to be a part of the Enough Food For Every One IF campaign’s Spot The George stunt on Parliament Square.

The Government’s promise to spend 0.7% of our national income on aid is an important issue to us as we know it is a step towards ending hunger and poverty worldwide. We really wanted a presence from Scotland, and indeed Glasgow, at the stunt due to the massive success we’d had earlier this year at our group’s lobby of MPs on this issue.

Although our train was delayed by two hours the night before – meaning we ended up with just four hours sleep – we were still at our meeting place just off Parliament Square at 7.30am on Tuesday morning. We joined 497 other campaigners from across the UK – it was great to see so many like-minded, and similarly dressed, activists!

By 8am we had donned our navy blue ties, grabbed our budget boxes and George Osborne masks and progressed to Parliament Square. Early morning commuters must have done a double take (well maybe that should be 500 takes!) when they saw the mass of George’s on the Square.

Seeing so many identical faces together like that was a bit surreal, almost like an episode of Dr Who.

It was a really cold and misty morning in the Capital, and so standing in the Square for almost two hours became a little uncomfortable. We were making a giant IF made up of all the George’s and so a cherry picker was used to take photographers 70ft above the Square to get a shot of us all in front of Parliament. We had to stand looking up holding our budget boxes high waiting to hear klaxons that
signalled when the photographers were ready. The cherry picker ending up taking 3 lots of photographers up rather than just the one, so we were all jogging on the spot to keep our frozen feet and hands warm. Condensation was dripping in our masks too! But we persevered and in the end the final image looked fantastic.

We came home to some fantastic news, the next day, Wednesday 20th March 2013, the UK Government announced it is keeping its 43 year old promise to spend 0.7% of national income on aid. It feels absolutely fantastic to be a part of this campaign and be able to put our own personal mark on it!

Back in 1970, 22 countries committed to the 0.7% aid promise and only five have so far delivered on it. The UK has just become the first G8 country to keep its promise. Now it’s time to encourage other G8 leaders to help tackle world hunger and poverty when they meet in the UK in June later this year.

You can help us by joining the campaign here.