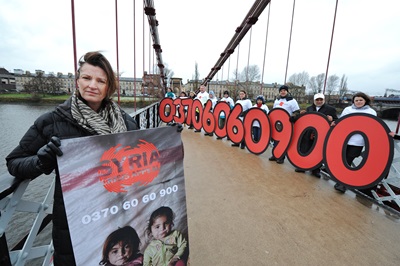 The Disasters Emergency Committee (DEC) was joined by Scottish actress Daniela Nardini today to urge Scots to respond to the needs of over 5 million people – equal to the population of Scotland – who are facing a dire humanitarian emergency in Syria.

The DEC – an umbrella group of 14 leading UK charities – came together this week to launch the Syria Crisis Appeal which urgently seeks funds to provide food, clean water, emergency shelter and medical care for those affected.

Daniela Nardini, calling upon the Scottish public to understand the needs of families suffering in the conflict, said: “The scale of the Syrian crisis is astounding with the number of people affected now equivalent to the Scottish population.

“The Scottish public have always supported DEC appeals very generously and we hope they will understand the great need of families in Syria who are suffering right now.

“We are asking for their support for people whose lives have been ripped apart by war. There is real hardship and a desperate need for food and clean water as well as medical supplies and shelter.”

This month marked two years since the conflict in Syria began. The war has already claimed 70,000 lives and up to 2 million people still remain inside the country facing risk of disease, malnutrition and severe trauma.

The number of refugees fleeing the country has increased from 1,000 a day at the beginning of the year to over 8,000 a day. DEC agencies are on the ground in Syria and neighbouring countries providing water, medicine and clothing for the 3 million people that have been forced to flee their homes.

Judith Robertson, Chair of the DEC in Scotland, said: “DEC agencies are providing life-saving aid inside Syria and to families who have fled to neighbouring countries. But there are still huge unmet needs and funds of more than £150m are urgently needed to provide basic but essential services such as clean water and warm clothes. Without these, the humanitarian crisis has turned in to a catastrophe and is causing real suffering. We need to act now to help as many people as possible.”

Habib Malik, Head of Islamic Relief in Scotland, said: “I recently spent time at IDP (Internally Displaced Person) camps inside Syria. What struck me was the sheer chaos. It was very crowded, there was no control, no authority. The camps are full of women and children. It was bitterly cold but the majority of children were wearing slippers.

“We urgently need to reach out to these desperate families, especially the children because otherwise it will be very difficult for them to survive. They feel they have been forgotten, they think nobody cares. I’d urge people to donate whatever they can to show these innocent victims of the violence in Syria that we do care. Together we can help them.”

To make a donation to the DEC Syria Crisis Appeal visit https://www.dec.org.uk, call the 24 hour hotline on 0370 60 60 900, donate over the counter at any high street bank or post office, or send a cheque. You can also donate £5 by texting the word SUPPORT to 70000. The full £5 will go to the DEC Syria Crisis Appeal. Donors must be 16 years or over and have bill payers permission. Texts are free and donations will be added to the bill.

Stay up to date with developments in Syria, the emergency response and the fundraising efforts with the DEC on twitter: https://twitter.com/decappeal or on Facebook via https://www.facebook.com/DisastersEmergencyCommittee