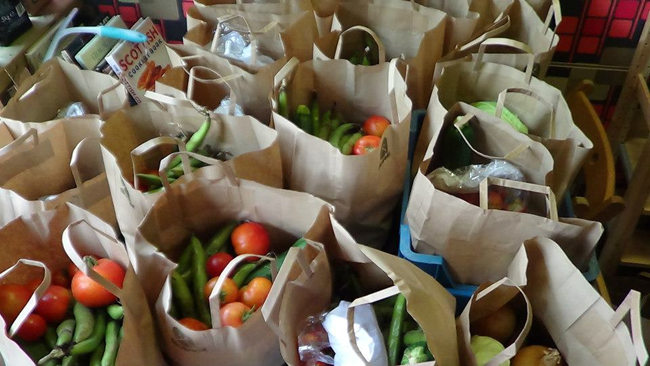 Britain faces a hidden scandal where thousands of people cannot feed themselves or their families, according to a hard hitting report from Oxfam and Church Action on Poverty.

The two charities, with the backing of the Trussell Trust, are calling for an urgent Parliamentary Inquiry into the relationship between benefit delay, error or sanctions, welfare reform changes and the growth of Britain’s ‘hidden hungry’.

The report Walking the Breadline identifies some of the causes for the increasing use of food banks as being changes to the benefit system, unemployment, increasing levels of underemployment, low and falling income and rising food and fuel prices. Changes to the benefit system are the most common reasons for people using food banks; these include changes to crisis loan eligibility rules, delays in payments, Jobseeker’s
Allowance sanctions and sickness benefit reassessments.

Judith Robertson, Head of Oxfam Scotland, said: “The shocking reality is that hundreds of thousands of people in the UK are now reliant on food aid. Cuts to social safety-nets have gone too far, leading to destitution, hardship and hunger on a large scale. It is unacceptable that this is happening in the seventh wealthiest nation on the planet.”

Click here to add your voice to those speaking out about the scandal of food poverty in the 21st century!

The Trussell Trust which is the biggest provider of food banks in the UK had last month reported that more than 350,000 people turned to their food banks for help in the last year, almost triple the number who received food aid in the previous year.

In Scotland, The Trussell Trust said 14,318 people were helped during 2012-13, up from 5,726 the previous year. It said almost a third of these cases were children.

Today’s report warns that the true number of hungry people across the UK could be more than half a million, as the problem is not being monitored properly. It calls for Government agencies to record and monitor people experiencing food poverty in the UK in order to establish more accurate numbers.

Niall Cooper, Church Action on Poverty CEO, and the report’s lead author, said: “The safety net that was there to protect people is being eroded to such an extent that we are seeing a rise in hunger. Food banks are not designed to, and should not, replace the ‘normal’ safety net provided by the state in the form of welfare support.”

West Dunbartonshire Foodshare is one of the projects featured in the report. It was set up by local welfare advice charities and other local groups in response to the growing food crisis locally.

It has only been running for a month, but has already fed around 200 people.

Danny McCafferty, chair of West Dunbartonshire Foodshare, said: “The fact that we are getting so many referrals so quickly, highlights the scale of the problem we are facing as a result of welfare cuts and unjustified benefit sanctions. And it’s not just people on benefits who are being affected, it is people who are on low wages too.

“We don’t wish to see foodbanks become an integral part of our welfare system, simply becoming like workhouses without walls, feeding the destitute abandoned by Government. We want to seek their abolition through campaigning for progressive policies that treat people with respect and dignity.

“We are fully behind the Walking the Breadline report. We support the call for a Parliamentary Inquiry into the growth of foodbanks in the UK, and for better monitoring of the scale of the problem.”

The report recommends that:

Paul (not his real name) is 42 and single. He is homeless at the moment and is living temporarily with a friend in Duntocher. He has worked continuously since 1987 in various different jobs. Around six months ago he had to leave his job in Glasgow to take care of a family member who was going through a crisis.

Paul said: “I’ve worked all my life since I was on the YTS scheme. I’m with the Lennox Partnership that helps people try to find work and I must have applied for around 20 jobs in the last six months. I walk around the building sites as well, looking to see if they have any work going. I’ve seen me walk 20 miles in a day doing that.”

Around four weeks ago, the Department for Work & Pensions told Paul that there was a gap in his jobs diary and that he was going to be sanctioned as a result. He has had no payments from the DWP since then.

“It’s terrible what they’re doing. I’ve not done anything differently in my jobsearch, so if there is a problem with what I’ve been doing they should have picked it up long ago. I feel like I’m being targeted. They tried to sanction me a while back for being late signing on, but I won that on appeal because some of the staff at the Jobcentre were able to confirm that I was on time.

“I feel numb. You worry about where you’re going to get money for food. I’m lucky that I’ve got good friends and family around me. I’ve been getting food from my mum, but she’s worried about my health now, she thinks I’ve been losing weight.

“Today I was told by the Jobcentre that I had been approved for a Hardship Payment, and that they had written to me to confirm that. But I haven’t had a letter from them and there’s no money in my bank account.

“The worst thing is that I’ve just been offered a flat in Dalmuir by the council. It’s a nice enough place, but because I’ve been sanctioned I’ve been told that I won’t be able to get help to pay the rent or decorate or get furniture. So I’m just going to have to stay where I am.”