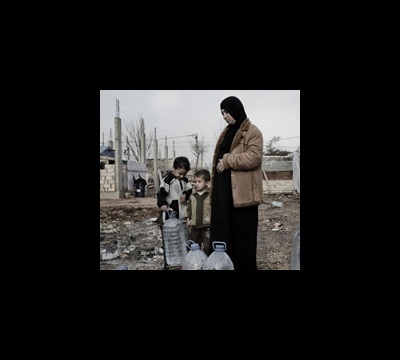 Last week the EU chose not to renew the arms embargo on Syria, which had prevented weapons being sent to the country. The UK and French governments argued for ending the embargo in the hope it would encourage both sides in the conflict to take part in meaningful resolution talks. Within hours, Russia announced its intention to send a shipment of 300 missiles to the ruling Assad government, while peace talks have been postponed again. Judith Robertson, Head of Oxfam Scotland, explains why the people of Syria need aid, not arms.

For more than two years an escalating conflict has devastated Syria. 80,000 people are dead with almost 7 million in need of aid – more than the entire population of Scotland.

Against this backdrop, we believe the European Union’s decision not to renew the embargo on sending weapons to Syria could fan the flames further still.

Transferring arms to either side could escalate and prolong the fighting and make the Syrian people even more vulnerable to violence and violations of their human rights.

Some 1.4 million people have already fled the country in fear for their lives, becoming refugees in neighbouring Lebanon, Jordan and Turkey. This is a crisis of staggering proportions – it demands a massive international humanitarian response.

What was needed from the EU was an unequivocal stance that it will do everything it can to stop the bloodshed and prevent a deadly arms race in Syria. We welcome the EU’s willingness to prioritise the pursuit of a political solution and its strong commitment for human rights and international humanitarian law.

However, European governments should be using their influence to secure a halt to international arms transfers from all governments to any warring party in Syria.

Oxfam has been advocating to bring the arms trade under control for more than a decade and played a crucial role in the campaign to secure a robust Arms Trade Treaty.

Under the new treaty, which was passed by majority vote at the United Nations in April and opened for signature today, arms transfers must not be authorised where there is a major risk the weapons will be used to commit violations of human rights or international humanitarian law.

EU countries need to live up to its principles, including within the Syrian crisis. The women, men and children of Syria are clamouring for their right to live free from violence. Relief agencies are overstretched and are struggling to cope with the massive surge in refugee numbers.

The immediate needs for millions of families are shelter, safety, clean water, clothing and food. These are basic human needs – the minimum any of us require to live. Yet right now the funds simply aren’t there to help all those who desperately require it.

UN appeals have received only half of what they sought. Donor funds to support refugees and displaced people are running low. Oxfam is working to bring relief to refugees in both Lebanon and Jordan – but we want to do more.

We are aiming to help 650,000 people in Jordan, Lebanon and Syria in the next 12 months. We have launched an emergency appeal for more than £30m and so far we’ve raised a quarter of the funds needed – we are hugely grateful to Scots for digging deep during tough financial times at home.

Indeed, earlier this year a joint appeal by the charities of the Disasters Emergency Committee, including Oxfam, raised more than £1.1m from Scots with £100,000 coming from the Scottish Government.

But, as the crisis goes on, the need for aid has increased. The Syrian people have just endured one of the coldest winters in 20 years and now face increased risk of disease as summer arrives with temperatures set to soar to up to 40 degrees.

In these conditions, without basic shelter and sanitation, the elderly, women and children are particularly vulnerable to infections that can be deadly. Oxfam is also calling on the UN Security Council to help improve humanitarian access.

It must use its influence to urge both the Syrian Government and opposition groups to do all they can to ensure help reaches those most in need. This could mean allowing aid to cross lines of control as well as across borders from neighbouring countries, such as Jordan, Lebanon or Turkey.

Syria’s people will go on dying in their thousands, and needing aid in their millions, until the divided international community comes together to press for a peaceful solution to end the bloodshed.

But we can all help those affected. To find out more, and to donate, go to www.Oxfam.org.uk/Syria.