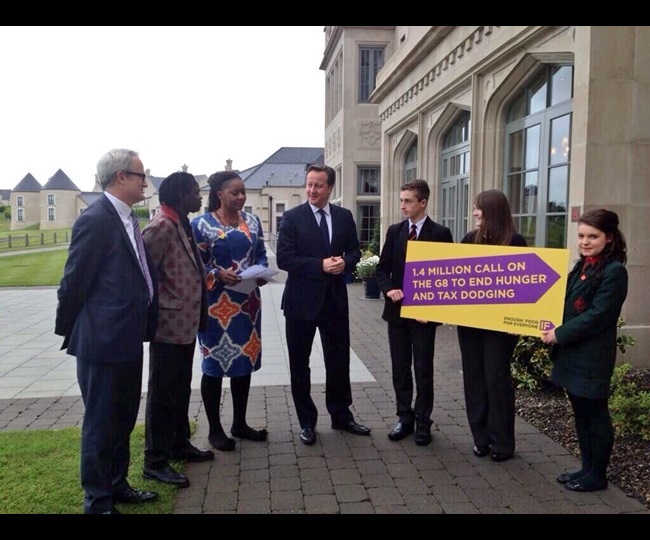 What a six months! Since the launch of the Enough Food For Everyone IF Campaign, I have braved freezing temperatures to help launch the campaign in Glasgow, lobbied by MP, organised a lunch to lobby other MPs with the Oxfam Glasgow Campaigns Group, been one of 500 George Osborne’s in Parliament Square, written to the chancellor, tweeted the Prime Minister and joined nearly 200 people from Scotland on the boat to Belfast for the Big IF rally on Saturday 15th June.

But at no point in these 6 months did I ever think I’d get a chance to go to the G8 and tell David Cameron personally we need to see action at this year’s G8 to tackle global hunger. On Monday, I did just that and I am so honoured to have been part of the delegation passing on the final message.

On Monday 17th June, before the G8 officially began, I joined Ben Jackson – CEO for Bond and IF Chairman, Pamela Chisanga – ActionAid’s Zambian Country Director, Baaba Maal – a signer from Senegal, and Melissa and Lorcan – two school children from Enniskillen, to hand the Prime Minister a letter on the behalf of 1.4 million people detailing our common goal – we want 2013 to be the beginning of the end for global hunger.

Along with this, we gave him a scrap book detailing campaign actions from all over the UK in the last 6 months, highlighting the huge amount of public support for the Enough Food For Everyone Campaign.

The Prime Minister acknowledged the enormous pressure he has felt from the campaign and thanked everyone who took action for making sure hunger, nutrition, tax, land grabs and transparency were a top priority at this year’s G8. After we handed over our letter, we headed inside to a closed meeting with the Prime Minister to discuss in greater detail the issues of tax, transparency and land to ensure they were at the very front of his mind when meetings began later in the day.

Pamela told the Prime Minister about Caroline Muchanga, a local trader from Zambia, who pays more business tax – in absolute terms – than the giant multinational she lives next to. Pamela wanted assurance from the Prime Minister that he would tackle aggressive tax avoidance so that she could report back to Caroline that her voice had been heard. This story really confirmed to me the unfairness of the almost untouchable power that some large corporations seem to have and I think the Prime Minister really sat up and listened to
Pamela’s personal story.

The importance of transparency, and the power imbalances often hidden behind it, was a re-occurring theme as I spoke to the Prime Minster on the importance of protecting land rights; preventing land grabs and ensuring transparency in land deals carried out by G8 companies.

The Prime Minister agreed that more needs to be done to address the issues of tax, transparency and land rights if we are to end world hunger. He emphasized his role as head of the Post-MDG’s High Level Panel with the one main aim of eradicating hunger and assured us he would push for decisions at this G8 that contribute to this end goal.

The Prime Minister now knows 1.4 million people are demanding he act to ensure no-one goes hungry when there is enough food for everyone. On the same day, it was revealed that some 1.4 billion pounds would be sucked into tax havens during the two days of the G8, depriving poor countries of the resources they need to tackle hunger themselves. I think you’ll all agree, it’s time for Mr Cameron and the G8 to act.