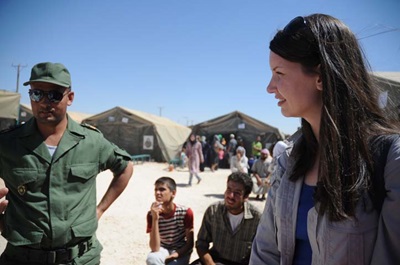 Lindsay Clydesdale works for Oxfam Scotland. During July and August she spent five weeks in Jordan and Lebanon, working on Oxfam’s response to the Syrian refugee crisis.

Imagine being born a refugee. In Zaatari refugee camp, Jordan, 400 Syrian babies are born every month. I met one of them, a two-day-old boy Zacharia who will be months or even years old before his mum can take him home.

Until then, “home” is a tent in the refugee city of Zaatari, in the Jordanian desert, five miles from the Syrian border. More than 120,000 people currently live in the camp which is so vast it’s now equivalent in size to Jordan’s fourth biggest city.

Life in the camp is hard. Keeping clean and healthy in this dusty, hot and busy camp is an ongoing problem for the refugees. Safe water is particularly precious here as Jordan is one of the most water-scarce countries in the world.
Oxfam is providing clean water and sanitation, crucial to prevent the spread of potentially fatal diseases in the soaring summer temperatures, in this densely populated camp.

But the refugees have fled for a reason. In the Syrian refugee crisis there is human suffering on such a staggering scale that the UN has called it the world’s worst humanitarian disaster.

Almost 2 million refugees have fled to Lebanon, Jordan, Egypt, Iraq and Turkey since the start of the civil war in Syria, now in its third year. As the conflict intensifies, that figure is set to double to 3.5 million by the end of 2013.

At least 100,000 people have been killed, 1700 of them children under the age of 10. Almost seven million people are in need of help inside Syria, that’s nearly a third of the country’s population.

Countries neighbouring Syria have done their best to help, keeping their borders open to the fleeing refugees, with communities supporting them where they can. In Lebanon, for example, a quarter of the population are now refugees. Imagine the impact if refugees numbering 1.3 million – the equivalent to a quarter of our population – arrived in Scotland.

Eighty per cent of the Syrians who have fled the war don’t live in official camps but in rented accommodation, tents or make-do shelters.

In Lebanon, refugee families are living in unfinished buildings, derelict shopping malls and even a cemetery. Oxfam is distributing cash to help families pay their rent, as well as providing safe water and toilets to families in temporary settlements, and giving out vouchers for food and essential hygiene products like soap and washing powder.

Many of the refugees are traumatised by what has happened to them and their country. Most endured long periods of fear and bombardment before taking the decision to leave. The Oxfam-supported Butterfly Effect project uses art, drama and psychology to coax out frightening memories from child refugees and help them deal with emotional trauma.

In Beirut I met 25 Syrian children, aged between six and 13, who had recently participated in the Butterfly Effect and I watched their play, We Came Out Into The Light. They performed scenes from their life before and during the war – experiences of violence and beatings in the conflict, terror from dropped bombs, separation from their friends and family and sorrow at lost loved ones.

As part of the therapy they were asked to draw something that showed what peace meant to them and their pictures included flowers and princesses, but most frequently the family homes, pets and life they left behind.

These are people who had lives just like ours: homes, jobs, schools, hospitals – all gone. Of course they want to return home but such an idea is impossible while the conflict continues. In the meantime, like millions of other Syrians, she needs all the help we can give to keep her and her children safe, not just alive but healthy and able to live with dignity and without fear.