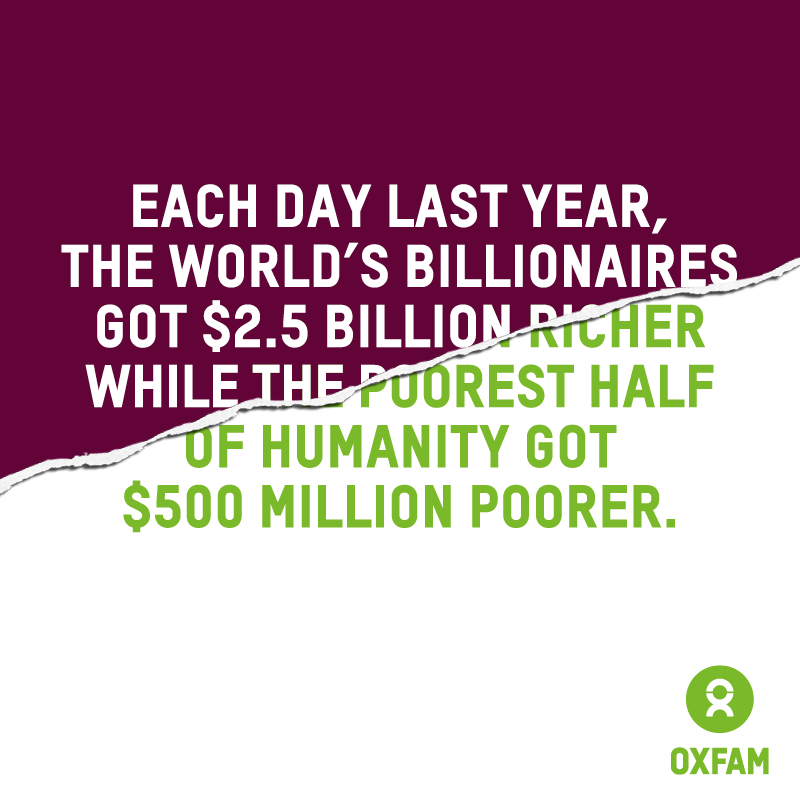 The 3.8 billion people who make up the poorest half of the world saw their wealth decline by 11 per cent last year while billionaires’ fortunes rose 12 per cent – or $2.5 billion a day, an Oxfam report published today reveals.

Public Good or Private Wealth? describes how decades of progress in reducing global poverty has slowed and is being undermined by the growing gap between rich and poor. The report, published as political and business leaders gather in Davos for the World Economic Forum, finds that 26 people now own the same wealth as the poorest half of the world – down from 44 in 2017.

Oxfam is warning that unless national governments do much more to reduce inequality, including by investing more in public services through fairer taxation, the global Sustainable Development Goal to end extreme poverty by 2030 will remain out of reach.

The massive fall in the number of people living in extreme poverty is one of the greatest achievements of the past quarter of a century, but rising inequality is jeopardising further progress.

To coincide with the report’s launch, campaigners are highlighting the opportunity for Scotland to lead the way in tackling inequality.

Jamie Livingstone, Head of Oxfam Scotland, said: “The way economies are organised around the world means wealth is increasingly and unfairly concentrated among a privileged few while millions of people are barely subsisting. It doesn’t have to be this way.

“While billionaires, business and political elites rub shoulders at the annual festival of wealth in Davos, we know change at national level is absolutely critical. Inequality continues to deepen in Scotland while one million people remain in poverty – that can’t continue. We have a chance to do things differently here but only if our policymakers have the courage to pursue bold policies which put people and planet first.”

Small steps have been taken in Scotland to make tax fairer, to ensure work is a better route out of poverty and to enhance social protection, but it is hoped the Poverty and Inequality Commission, which is being placed into statute, will inspire deeper action.

Glasgow-based global inequality expert Dr. Katherine Trebeck echoed the need for countries to reassess their obsession with economic growth and instead measure success through wider metrics which prioritise wellbeing.

Dr. Trebeck said: “Today’s startling statistics from Oxfam are further evidence that inequality is trapping millions of people in poverty and fracturing our societies. If we’re to address this growing problem, then governments around the world, including here in Scotland, need to tackle it head on.”

Next week Dr. Trebeck and co-author Jeremy Williams will launch a bold new book, The Economics of Arrival: ideas for a grown up economy, which reimagines what global economic progress could mean if it is no longer focused on growth.

Trebeck and Williams set out a vision of an economy that works for all as well as the steps to get there, with recommendations for businesses, individuals and countries. The authors want high income countries to recognise when they have “arrived”: they are at a place where a decent standard of living could be universal if existing resources are distributed more fairly.

In the book, the authors highlight the Wellbeing Economy Governments (WEGo) initiative, recently launched by the Scottish Government alongside those of Iceland and New Zealand, as a sign of Scotland’s commitment to making progress. The joint project will see governments exchange policy ideas to promote an economy based on shared wellbeing on a healthy planet.

According to Dr. Trebeck, Scotland’s role in establishing WEGo makes it a prime candidate to be one of the first world economies to embrace the reality that it has arrived and now needs to make itself at home – sharing its wealth better and making better use of resources.

Dr. Trebeck said: “The Scottish Government is well placed to lead the way in the fight against inequality, having already laid the foundations to begin building a fairer country.  What’s needed now is for Scotland to keep building on this progress and demonstrate to the rest of the world that we may be a small country, but our ideas are big.

“Ultimately, we have to ask ourselves: what good is growth that damages the things we value most – community, relationships and our own health?

“Right now, the economy is like an airplane in flight climbing ever higher, but a plane needs a destination. Our book sets out what that destination could look like – what it would mean for a country’s economy to arrive.”

Dr Trebeck will be launching The Economics of Arrival: ideas for a grown up economy on Wednesday 30 January at Blackwells bookshop, Edinburgh.

For review copies of ‘The Economics of Arrival’: Kathryn King, Policy Press at kathryn.king@bristol.ac.uk