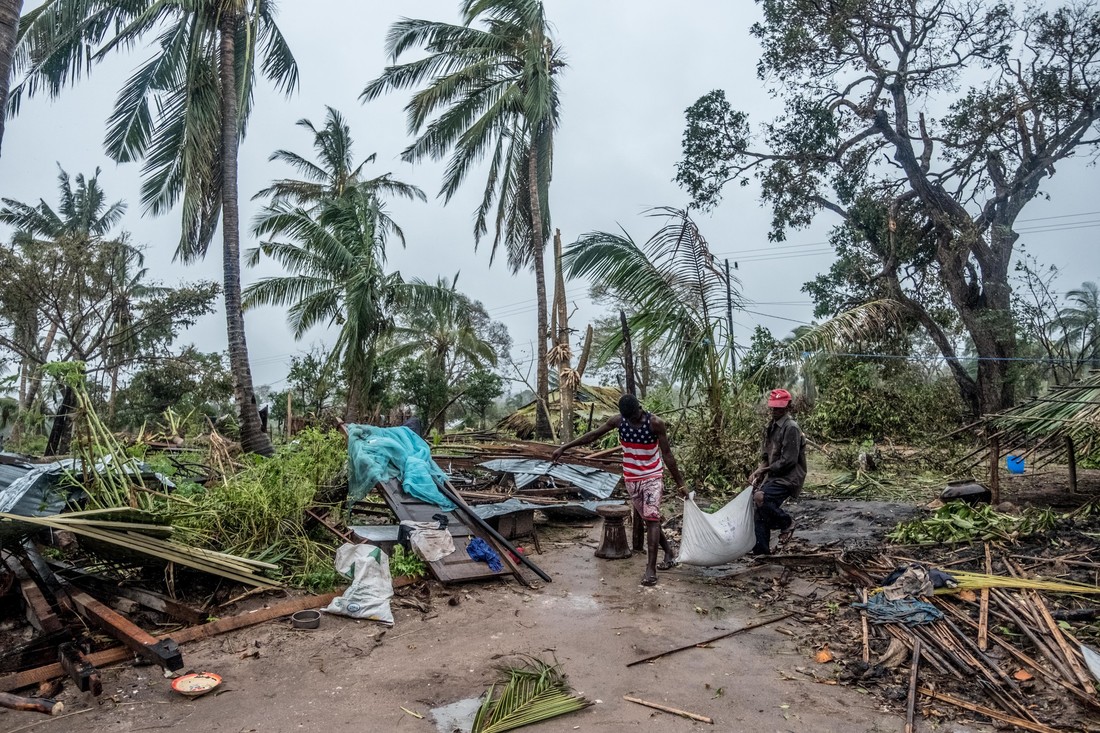 Three months ago, Mozambique was hit by two unusually powerful cyclones in the space of only six weeks, creating one of the worst weather-related disasters to hit the southern hemisphere on record. According to the UN, more than 2.2 million people need urgent assistance, with more than 239,000 homes known to be destroyed or flooded.

In my day job, I work in Oxfam’s Glasgow office, but this month I have been deployed to Mozambique as the Campaign Manager for Oxfam’s humanitarian response to Cyclones Idai and Kenneth. I am based in the city of Beira in central Mozambique, an area that was devastated by Cyclone Idai.

Across from my office, there was a camp where people who have been displaced from their homes were staying, awaiting a more permanent solution. The government is resettling those unable to go home in areas safer from future disasters and flooding. Resettling is a tricky process as many new areas are bushland and communities are having to create villages from virtually nothing. If these new villages are to work for the long term, it is vital that through the process of resettling, people’s rights are respected and support is given to ensure opportunities to earn a living.

Some of the people I spoke to who have recently been re-settled have begun to cultivate the land, growing cassava and sweet potato. The cyclone forced them from their homes, but they are starting to begin new lives on land that should provide more protection from future disasters. Oxfam and our partners are distributing seeds and tools to the most vulnerable families. There is a short window to fit with the harvest season, so it is vital that families can plant now to enable them to get back on their feet.

Others, like Victoria, are still in need of urgent support. “We have nothing and nowhere to go. The cyclone destroyed our homes. Presently, I am staying in a makeshift shelter with 16 people, including my three children. It is not a good way to live”.

As those affected begin to try and recover from the devastation of the cyclones, they are facing another crisis: a food security crisis. People in the regions affected faced extreme poverty before the cyclones, and the disaster has compounded what was already a growing problem. Those who were on the edge of a food crisis have seen their resilience weakened and their harvest lost. For example, most female headed households relied on subsistence farming before the cyclones, and the loss of crops and land is pushing many into extreme poverty. People desperately need emergency food assistance to rebuild their lives and avert a further disaster.

Before the cyclones struck, those living in Mozambique were already adapting to cope with the harsh reality of a changing climate. Rising global temperatures mean more erratic weather patterns. Mozambique has been on the frontline of climate change as drought, floods and disaster have repeatedly struck over the past two years.

The human cost of the cyclones in Mozambique is a deadly warning of what the world can expect if we are too slow to reduce emissions and if we fail to support vulnerable countries to become more resilient. Half the population of Mozambique, over 15 million people, are currently susceptible to climate related shocks. It is overwhelmingly the poorest who are worst affected by extreme weather because they have the least resources to respond.

In other countries, Oxfam is working with partners to address this vulnerability. We are constructing cyclone shelters, installing extensive and diverse early warning systems, building safer homes, and helping farmers to transition to drought and flood tolerant crops. But responding to extreme weather disasters, like cyclones, diverts resources from existing development work, putting the most vulnerable at risk.

I know how easy it is to read about these emergencies in a newspaper tens of thousands of miles away and feel helpless. While we now talk about a “climate emergency”, the effects on Glasgow are vastly different to that of already vulnerable communities around the world. We need to stand in solidarity and action with the poorest people whose lives have been torn apart by a climate emergency they did little to cause.

Often it is more straightforward to focus on problems we can see on our doorsteps, but the growing number and severity of climate related shocks in countries like Mozambique must prompt us to rethink how we respond to the climate emergency. Cyclones like Idai and Kenneth are deadly warnings of what the whole world can expect unless we act today to slash our emissions: and that needs to happen more in Bearsden than Beira.

This opinion piece was first published in the Herald on Sunday 23 June 2019.