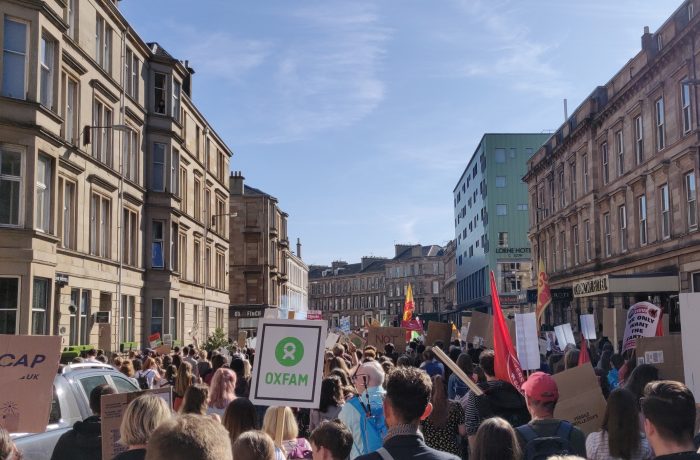 Today is International Day of the Girl Child.

Started by the United Nations in 2012, the day aims to highlight the needs of, and challenges faced by, girls around the world, while promoting their empowerment.

The theme this year – GirlForce: Unscripted and Unstoppable – celebrates achievements by, with and for girls.

We recently saw the power of one girl, Swedish teenager Greta Thunberg, as four million people around the world joined the Global Climate Strikes – a movement which grew out of Greta’s ‘Fridays For Future’ school strikes outside the Swedish parliament.

Across the globe, young female climate activists are raising their voices.

Ridhima Pandey was only nine when she took legal action against the Indian government for failing to act against climate change in 2017.

And recently, Jessy Nkhoma from Malawi travelled to the UK with Oxfam to tell our political leaders of the effect climate change is having in her home country, including droughts and flooding.

We are witnessing an extraordinary call to action from young people across the world and should be proud that those in Scotland are amongst them. More than 40,000 people joined them at the Global Climate Strike led by Scottish Youth Climate Strike only a few weeks ago.

Alongside their demand for faster action to cut emissions is one that receives less attention yet is also critical: they want the climate crisis to be made an educational priority.

In Scotland, the original driving force behind our national Curriculum for Excellence was to make education fit for the twenty-first century. It was recognised that an exam-driven education system focused on individual success served neither young people nor society and Global Citizenship Education was embedded throughout the curriculum.

Global Citizenship Education does not tell young people what to think but instead shows them that they have a voice and gives them the skills, knowledge and values to use it. It is enshrined in the UN Sustainable Development Goal 4.7 and in Scotland it forms part of Learning for Sustainability, which was made an entitlement for all pupils in 2013.

However, enacting this entitlement presents challenges. The renewed assessment-driven focus on literacy and numeracy squeezes scope for teachers and pupils to think more widely and funding to provide Global Citizenship Education is also at risk.

In recent years, Scotland’s Development Education Centres have worked with thousands of Scotland’s teachers to support the realisation of Global Citizenship Education in schools.

But their funding from the UK Government has reduced, their access to European Commission money is at risk due to Brexit, and the Scottish Government’s welcome commitment to cover the Centre’s core costs expires in the coming period. It’s a triple-whammy which, if left unresolved, risks undermining the positive role Global Citizenship Education plays within Scottish education.

The Scottish Government must do what it can by renewing its commitment to the Centres, and by properly funding the Learning for Sustainability Action Plan which it launched in June.

Young people’s demand that the climate crisis becomes a key part of their education recognises that there has been a loss of focus in this area.

But ensuring our schools are supported to play their part in building a widespread, deep and shared understanding of what needs to be done and why is vital.

As we celebrate the achievements of girls across the world today, we’re asking for Global Citizenship Education to remain a core part of the Scottish education system.

If it does, who knows how many more girls and other young people in Scotland can follow in Greta, Ridhima or Jessy’s footsteps.