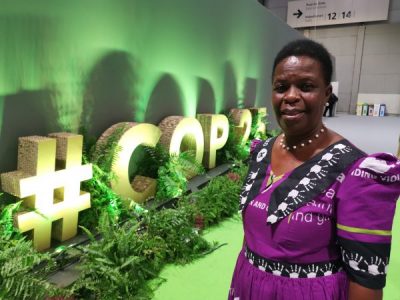 With 11 months until the world’s climate talks arrive in Glasgow for COP26, international development charities say Scotland must increase its contribution to helping the world’s poorest countries.

At the UN climate talks in Madrid, Scotland’s international development charities have called for ministers to identify new sources of funding to increase support to people in many of the world’s poorest countries which are being devastated by the climate emergency right now.

Christian Aid Scotland, Oxfam Scotland and the Scottish Catholic International Aid Fund (SCIAF), along with the leading climate coalition Stop Climate Chaos Scotland, say Scotland helped create the climate crisis through its carbon emissions and is now duty-bound to increase support to those impacted by it.

Just 12 months before Scotland hosts a major UN Climate Change summit – known as COP26 – the charities say that as well as reducing emissions at home, it is time to enhance the Scottish Government’s Climate Justice Fund to help some of the world’s poorest countries reduce their emissions and adapt to climate change.

Critically, the agencies also want additional ring-fenced funding to support communities and countries to recover from unavoidable loss and damage created by the climate emergency, thereby setting a powerful global example ahead of COP26.

The call comes amid strong international pressure at the COP in Madrid for wealthy countries to increase adaptation support as well demands from less developed countries for a new, separate finance facility to help communities recover from unavoidable impacts of the climate crisis – such as being forced to relocate and rebuild their lives and their livelihoods.

While Scotland is not a formal party to the Paris Agreement, unlike the UK, Scotland’s Cabinet Secretary for Climate Change Roseanna Cunningham is at COP25 in Madrid discussing Scotland’s climate action amid a growing focus on the need for increased action by actors at all levels.

Ellen Matupi, 62, a smallholder farmer from Malawi’s northern district of Rumphi and the National Chairperson of the Coalition of Women Farmers in Malawi, is attending COP25 in Madrid and said: “Farming is unpredictable these days. If we grow crops, we have a number of problems like droughts and floods. Sometimes we plant seeds and they don’t even germinate because the rains would just cut off. We need resources to be able to grow enough food for our families and livelihoods.

“When I don’t get a good crop, I will not put food on my table for my children. The climate emergency is now, disasters are happening now. Global leaders should commit more resources and farmers need to access and benefit from these resources directly.”

Amid a surge in climate activism in Scotland, the agencies praised the Scottish Parliament for agreeing stronger emission targets to reach ‘net zero’ carbon emissions by 2045 – five years earlier than the rest of the UK – with a 75 percent cut compared to 1990 levels by 2030; though SCCS campaigned for 80 percent by 2030. Crucially, the Climate Change Act commits the Government to aligning its response to the Sustainable Development Goals, whilst following the principle of “climate justice”.

Scotland’s innovative Climate Justice Fund was created in 2012 with cross-party support, and is partly funded through Scotland’s Hydro Nation strategy, which seeks to share the value of Scotland’s water resources with other countries. The charities praise the Scottish Government’s work to date but say more money is now needed in light of the growing scale and depth of climate-impacts and to reflect its declaration of a “climate emergency”.

The Scottish agencies want to prompt an urgent discussion about ways to increase levels of funding support for poorer countries. They point to the Scottish Parliament’s power to introduce new taxes, its ability to tax passengers flying from Scottish airports, and the revenues created by the planned Scottish National Investment Bank. They say the Parliament should avoid diverting money from international development or domestic priorities, including anti-poverty initiatives.

Jamie Livingstone, Head of Oxfam Scotland, said: “Too many wealthy countries are failing to live up to their promise to help poorer nations cope with the climate crisis, leaving people to struggle without support or forcing those who have done the least to cause it to foot the bill.

“In financial terms Scotland’s contribution is small, but we have shown innovative and strong leadership on climate justice previously and must do so again ahead of the talks in Glasgow.

“We have stronger emission reduction targets, but we will still have an historic climate debt and will continue to make matters worse for 30 more years. The climate emergency is unfolding now with the world’s poorest people hit first and worst. Scotland can’t look away.

“The Scottish Parliament has a range of revenue-raising powers at its disposal and it is only right that as we prepare to host the world’s climate talks, ministers redouble Scotland’s commitment to the world’s poorest people and look at how we can increase our contribution to climate justice.”

Climate related disasters were the number one driver of internal displacement over the last decade, and a new report from Oxfam out last week revealed how these disasters are forcing more than 20 million people a year to leave their homes. Substantial climate finance provided annually – with at least 50 percent focused on supporting countries to adapt to climate change alongside reducing their emissions – would allow countries to, for example, diversify crops. It would particularly benefit women who are often more vulnerable to climate-fuelled disasters.

Consistent with calls from developing countries for climate finance to be new and additional to existing aid commitments, the charities say extra funding committed in Scotland should not be counted by the next UK Government as part of its commitment to spend 0.7 percent of gross national income on international development. This would ensure all additional climate finance committed in Scotland contributes directly to an increase in global funding levels.

“By identifying new funding sources to boost our Climate Justice Fund ahead of the talks in Glasgow, we can send a clear message that all rich, developed countries must do more.”

Alistair Dutton, SCIAF Chief Executive said: “Scotland can be proud of our early commitment to climate justice, but now is the time to deepen this example. Everyone, from national to sub-state governments, regions and cities, has a critical role to play in responding to the climate emergency and innovative ideas often come from the smaller players.

“With the UK hosting COP26 in Glasgow, Scotland is extremely well placed to identify new funding streams and then influence others to do the same. With the eyes of the world on Scotland, now is the time for us to lead by example.”

At the 2009 Climate Summit in Copenhagen, rich countries promised to collectively provide $100 billion a year by 2020 to help poor countries cut their emissions and adapt to a changing climate. In September, the OECD reported $71.2 billion was mobilised in 2017 – though Oxfam finds this over states actual support by a huge margin with three quarters of support in the form of loans that need to be paid back. Internationally, potential revenue-streams for climate finance include targeting high polluting activities, such as carbon pricing for international aviation and maritime transport.