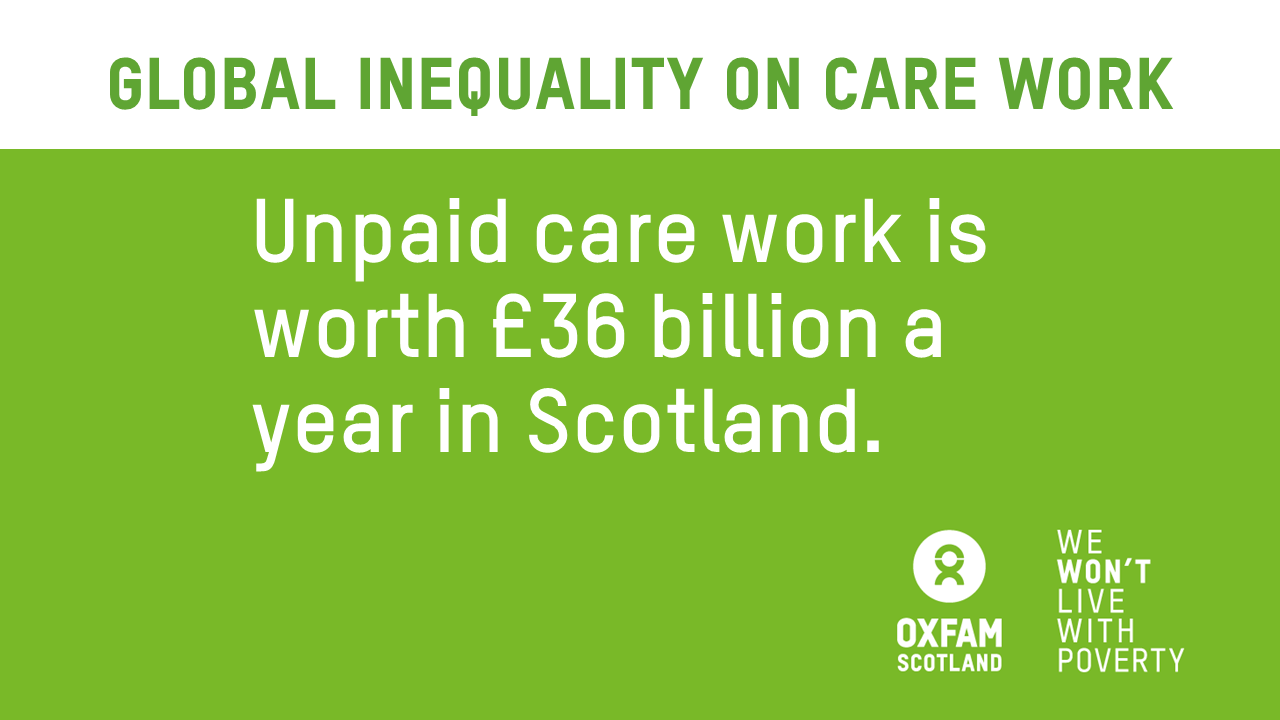 The ‘Time to Care’ Oxfam report reveals the scale of global inequality linked to care work, ahead of the World Economic Forum in Davos this week.

Oxfam Scotland analysis shows the estimated value of unpaid care work in Scotland to be £36 billion, and polling shows 72 percent of people in Scotland back governments spending more on social security benefits for carers of those who are sick or disabled.

Our polling shows that four in five people in Scotland believe unpaid care work is not valued highly enough, with strong support for measures to address this.

The Scotland analysis has been published ahead of the annual World Economic Forum which kicks off in Davos this week, and as a new global Oxfam report highlights how a broken worldwide economy has accumulated vast wealth into the hands of a rich few, in part by exploiting the unpaid labour of millions.

We’re joining the voices of national carers’ organisations who have for a long time been calling for significantly more investment in high quality, flexible social care, alongside much improved social security for carers. These changes would support unpaid carers and better protect them from poverty.

Scale of global inequality when it comes to care
Oxfam’s new report ‘Time to Care’ shows that women and girls are carrying out 12.5 billion hours of unpaid care every day, with this contributing at least $10.8 trillion a year to the global economy. Women, especially those in poverty, do more than three-quarters of unpaid care work but this is often rendered invisible in measures of economic progress and policy agendas.

Care work includes looking after children, elderly people, disabled people and those with additional needs, as well as daily domestic work like cooking and cleaning. Without someone investing in these essential daily tasks, communities, workplaces and whole economies would grind to a halt.

The global report highlights how inequality remains at crisis levels with wealth valued over work and with the contribution of women un-rewarded. Astonishingly, the paper shows the 22 richest men in the world have more wealth than all the 325 million women in Africa.

While care work is crucial to society and the economy, and pressure on carers set to increase with an aging global population, governments too often fail to recognise the vital contribution that unpaid care work represents.

Scotland value and polling
To coincide with the global report, separate analysis released by Oxfam Scotland shows that the economic value of unpaid care work to the Scottish economy far outstrips the scale of investment to protect carers, parents, and those they care for from poverty.

Quantifying the economic value of any unpaid work is complex. One way to do so is to base it on current rates of pay in equivalent sectors. Doing this suggests the wage value of unpaid household and caring work in Scotland is an estimated £36 billion.

As a broad, rather than like-for-like, comparison this is more than twice the Gross Value Added in Scotland by the financial services sector and almost four times the oil and gas sector.

Despite this, caring is often associated with a higher risk of poverty. For example, 12 percent of working-age couples without dependent children in Scotland live in poverty, but this rises to 18 percent for couples with dependent children. The poverty rate for single mothers is 39 percent, which is higher than the overall rate for working age adults of 20 percent.

Those living in or at risk of poverty tend to spend more hours caring. The Scottish Government estimates that almost half of carers (45 percent) in the most deprived areas of the country care for 35 hours a week or more, almost double the level in the least deprived areas.

Oxfam says that in Scotland and around the world the contribution of people delivering care must be better valued while highlighting that investment in care sectors could create more and better jobs, lift people out of poverty and reduce inequality.

Ahead of the Scottish budget, Oxfam Scotland is calling for additional investment to better value unpaid care work in Scotland.

Rhiannon Sims, Research and Policy Officer, Oxfam Scotland said: “Across the world, and in Scotland, unpaid care work is vital to our households and communities, but it is too often undervalued by society which can trap those who are providing it, very often women, in poverty.

“If political leaders, whether at Davos this week, or at UK or Scotland levels, are serious about reducing poverty and inequality, they urgently need to invest more resources to ensure this major contribution to our economy and society is recognised and better valued.

“We recognise the huge efforts of those who’ve long been highlighting the importance of unpaid care in Scotland, but more action is needed. When it comes to the Scottish budget next month, and the UK budget soon after, the people of Scotland resoundingly support better valuing those delivering unpaid care.”

Fiona Collie, Policy and Public Affairs Manager, Carers Scotland, said: “We welcome this report that sets out starkly the value of unpaid care. Despite the billions of pounds carers’ contribution is worth, caring comes at great personal cost. Too often carers face poorer health, greater poverty and more isolation than non-carers simply because they care.

“Whilst efforts have been made to provide support through the Carers (Scotland) Act and additional carers’ benefits, there is a pressing need to invest significantly more in high quality, flexible social care, available alongside much improved social security for carers. Without such investment carers will continue to face high financial, health, social and employment penalties for their caring role.”

Satwat Rehman, Director, One Parent Families Scotland said: “For many single parents – the vast majority of whom are women – being both the main carer and breadwinner for their children places them in a unique position of trying to manage caring responsibilities with paid work. The care and welfare of their children is the primary concern of the parents we work with, but in the current economy where paid work is seen as the ultimate goal parents often feel that their caring role is devalued.

“.Recognising and valuing the caring role of single parents is vital and would enable them to make informed choices about paid work that they could balance with their caring responsibilities and enter work that does not keep them in poverty. Key to this is childcare.

“Whilst we welcome the expansion of early learning and childcare and the focus on quality, the Scottish Government needs to ensure that it is flexible enough to allow single parents to study, train, enter and progress in paid work.”

Professor Ian Welsh OBE, Chief Executive, the Health and Social Care Alliance Scotland (the ALLIANCE), said: “This new data gives us an insight into the astonishing value of unpaid care in Scotland, highlighting like never before the importance of unpaid carers to the people they care for but also to Scottish society. Without their £36bn contribution, Scotland’s health and social care system would be unable to function as it currently does.

“The ALLIANCE, through our Carer Voices project, has long called for a greater importance to be placed on listening to the voices of unpaid carers as experts by experience and this new data makes this case even stronger. Unpaid carers must attract the support that their role rightly deserves.”

Total sample size for YouGov survey was 1,035 adults. Fieldwork was undertaken between 9th – 13th January 2020. The survey was carried out online. The figures have been weighted and are representative of all Scotland adults (aged 18+).