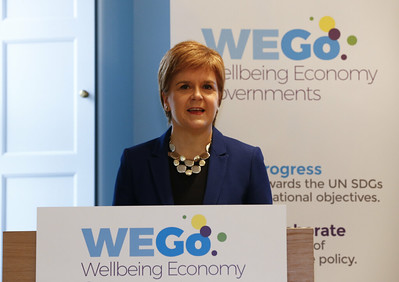 Nicola Sturgeon will today champion a ‘wellbeing economy’ at an event in Edinburgh.

Scotland, New Zealand and Iceland are leading the way in this debate and such champions are badly needed in our over-heating world and with almost half of humanity still locked in poverty. While these challenges should be a clarion call for change, there’s another overlooked injustice at the heart of our economy: our treatment of those caring for children, older people and those with additional needs.

Right now, we are stuck with a warped, upside-down global economy with vast fortunes flowing into the hands of a few, largely male, pairs of hands, while carers – predominantly women – go chronically under-rewarded. Bluntly, our global economy is sexist with women, especially those in poverty, doing more than three-quarters of all unpaid care. Yet this model is sustained by many of those meeting at the World Economic Forum in Davos.

The reality is that care is the ‘hidden engine’ keeping the wheels of our economies and societies moving. But with more people living longer, it is an engine that is in danger of burn out.

Care is about so much more than its monetary value – it’s about people, kindness and human rights.
But our economies only really value activity that makes money so carers are often left under-supported and under-valued.

In her recent viral Ted Talk, the First Minister highlighted the inadequacies of Gross Domestic Product as a measure of success, noting starkly that it places a value “on illegal drug consumption, but not on unpaid care”.
We better understand the need to fill this void and our analysis suggests unpaid care is worth at least $10.8 trillion per year globally.

In Scotland, it’s worth an estimated £36 billion every year, almost four times the gross value added by the oil and gas sector. Our polling shows that not only do four in five people in Scotland think unpaid care work is not valued highly enough, but nearly three quarters back governments spending more on social security benefits for carers of those who are sick or disabled.

Yet too many of Scotland’s more than 780,000 carers remain in, or at risk of, poverty. That is why we have joined with carers’ organisations to say this cannot continue.

Progress is being made in Scotland with additional benefits now in place, new obligations on councils to offer better support and action underway to expand early learning and childcare hours. The First Minister has also placed strong focus on young carers. But care organisations say we must significantly boost investment in high quality, flexible social and child care and make further improvements in social security. They say flexibility is key for single parents juggling care with the hunt for paid employment.

We refuse to believe our broken economy is the best we can do, or that progress to better value care is impossible. It should be a litmus test for the wellbeing economy the First Minister rightly champions.

This opinion piece first appeared in the Scottish edition of the Times on Wednesday 22 January 2020.