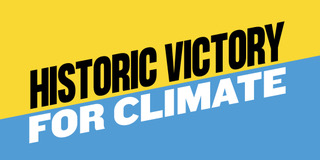 A landmark ruling today has found the French State at fault for failing to take enough action to tackle the climate crisis. The decision by the French court will serve as a warning to other governments to do more to reduce carbon emissions in line with their public commitments, said Oxfam France, a plaintiff in the case.

In December 2018, Oxfam France, Notre Affaire à Tous, the Nicolas Hulot Foundation and Greenpeace France launched a legal action against the French State for failing to reduce the country’s emissions fast enough to meet its commitments. More than 2.3 million people signed a petition supporting the action – the largest in French history.

It is the first time the French State has been taken to court over its responsibility on climate change. Today’s decision leaves the government open to compensation claims from French citizens who have suffered climate-related damage, and could force it to take further steps to reduce its emissions.

Cécile Duflot, Executive Director of Oxfam France, said: “Today’s decision is a historic victory for climate justice. For the first time, a French court has ruled that the State can be held responsible for its climate commitments. This sets an important legal precedent and can be used by people affected by the climate crisis to defend their rights. This is a source of hope for the millions of French people who demanded legal action, and for all of those who continue to fight for climate justice around the world. It is also a timely reminder to all governments that actions speak louder than words.”

The ruling comes as many countries are preparing more ambitious targets to reduce emissions, as required by the Paris Agreement. Governments are due to meet in Scotland later this year for the COP26 climate summit. Scientists and campaigners say the targets already announced fall short of the cuts needed to avoid catastrophic global warming.

In Scotland, public concern about the climate crisis is very strong and growing, with a sharp rise in the proportion of adults viewing climate change as an “immediate and urgent problem”: jumping from 46% in 2013 to 68% in 2019.

Ahead of May’s Scottish Parliament election, Oxfam Scotland is calling on Scotland’s five main political parties to ensure that Scotland shows global leadership on climate change, by both delivering on its own ambitious emission cuts pledges and by boosting the level of financial support it offers poor communities on the frontline of the climate crisis.

Responding to the judgment, Jamie Livingstone, Head of Oxfam Scotland, said: “This landmark ruling should be a wake-up call to governments around the world that their people can and will hold them to their climate promises.

“Here in Scotland, there’s lots of momentum and appetite for tackling climate change, and we have some of the most ambitious legal emissions reduction targets in the world. But we can’t be complacent; while we have made significant progress, our last annual reduction target wasn’t met and time isn’t on our side.

“The Scottish Parliament must accelerate action to deliver on its climate pledges; missing any more annual emissions targets would be a hammer blow to Scotland’s green credentials.

“Another threat to Scotland’s climate credibility is the fact that while the gravity of the climate emergency is increasing, the value of the financial support Scotland gives to help the world’s poorest people to adapt and respond to climate change, is decreasing.

“With landmark global climate talks scheduled to take place in Glasgow this November, now is the time for the Scottish Parliament to show a watching world that it will truly walk the walk on climate change.

“That means meeting our legally binding targets on emissions cuts while standing in solidarity with the world’s poorest people – who did least to cause the climate crisis yet are being hardest hit – by significantly boosting the financial support we offer them and encouraging other countries to do the same.”

The Scottish Government’s new Climate Change Plan, setting out how Scotland will cut emissions by 75% by 2030, is currently going through Scottish Parliamentary scrutiny. Campaigners are calling for greater action to cut emissions in sectors where there has been little progress, including in relation to transport, agriculture and buildings.