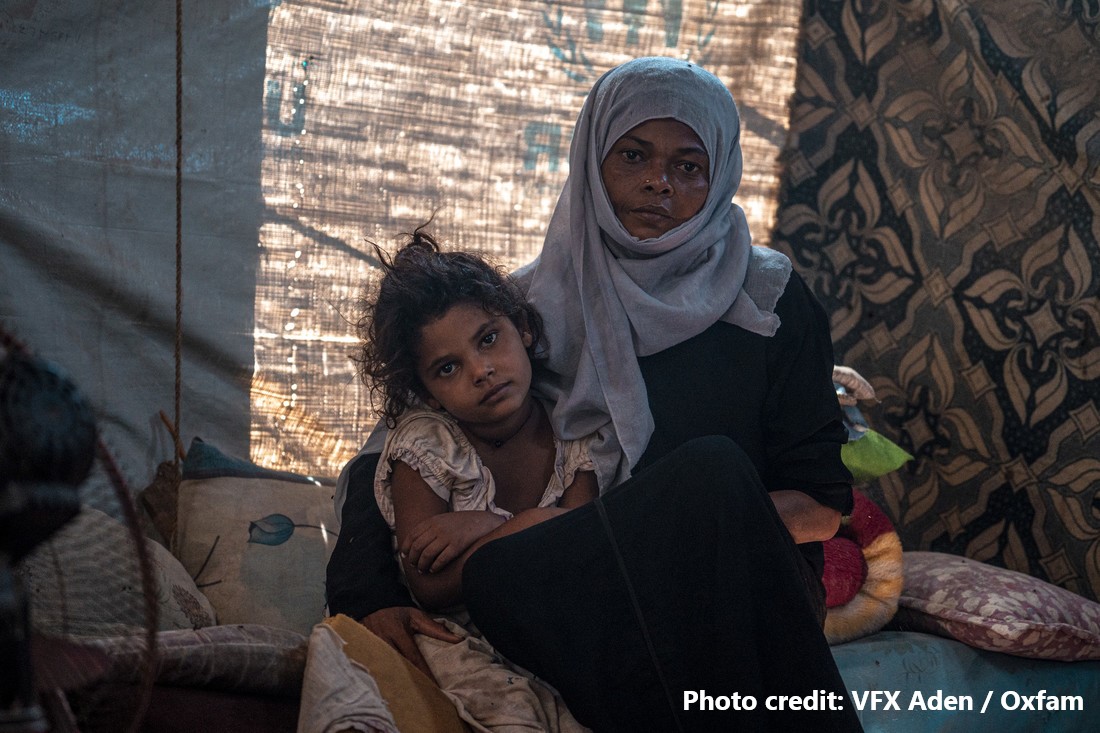 Hanan spends her days scavenging for empty cans and plastic bottles, filling plastic bags to sell to cover the cost of food for two young daughters. Sometimes she also finds herself in restaurants, begging people for the leftover food on their plates.

It’s been six years since the conflict in Yemen intensified with Hanan forced to leave her home in Al Hudayadah order to protect herself and her family from shrapnel from the bombs that were pounding their neighbourhood. She now lives in a camp along with others who have been forced to flee, wondering how she will find enough food to survive each day.

Hanan isn’t the only one suffering. Since the conflict in Yemen started six years ago, over 4.4 million people have been forced from their homes. There have been over 18,500 civilian casualties with atrocities committed by all sides.

Yemen is now the world’s largest humanitarian crisis; with two thirds of the country’s population reliant on food aid to survive, and thousands facing famine.

It’s against this devastating backdrop that the UK Government has made its latest unconscionable choices. First, came the news that it was issuing licences allowing £1.36 billion of new bombs missiles and rockets to be exported to Saudi Arabia, many of which will be used in the conflict in Yemen. Second, in devastating contrast just weeks later, the UK Government said it would almost halve its direct aid to the people of Yemen.

The consequences of both these decisions will prove to be deadly.

Slashing aid to Yemen – a country on the brink of famine – is a betrayal of the UK’s claim to global leadership and its stated values if equality and human rights, as outlined in last week’s integrated review. Aid cuts are a false economy that will remove a vital lifeline from millions of people in Yemen – people like Hanan – who can’t feed their families, have lost their homes and whose lives are threatened by conflict and Covid 19.

The UK Government should urgently think again and reverse the cuts. However, restoring lifesaving aid to Yemen is just part of the puzzle. The Prime Minister should also urgently stop the arms sales to Saudi Arabia which are fuelling the conflict. He must know this is the right thing to do.

If he fails to act, more lives – like those of 28-year-old Ali Abdo Mohammed – will be lost. He had been on his way to help rescue a family who’d been trapped amidst the fighting when the bus he was travelling on was blown apart by an airstrike. The force of the attack was so strong that only a few tiny pieces of his body were found; not enough for his widow, Rahmah, to bury.

And it’s not just lives that are lost to airstrikes: vital infrastructure like hospitals, clinics, water tanks and wells have been consistently hit by air raids since the conflict began. Their damage and destruction make Yemeni people even more vulnerable to diseases like COVID 19 and cholera.

Six years on from the conflict erupting, it’s clear that if Yemenis like Hanan and Rahmah are ever going to be able to focus on the future rather than daily survival, then an immediate ceasefire and a successfully negotiated end to hostilities is urgently needed.

If the UK Government still claims to be on the side of peace in Yemen; it needs to prove it, by ending the sale of all arms that risk being used against civilians and ending its complicity in a man-made humanitarian crisis that has brought needless suffering to millions of people.