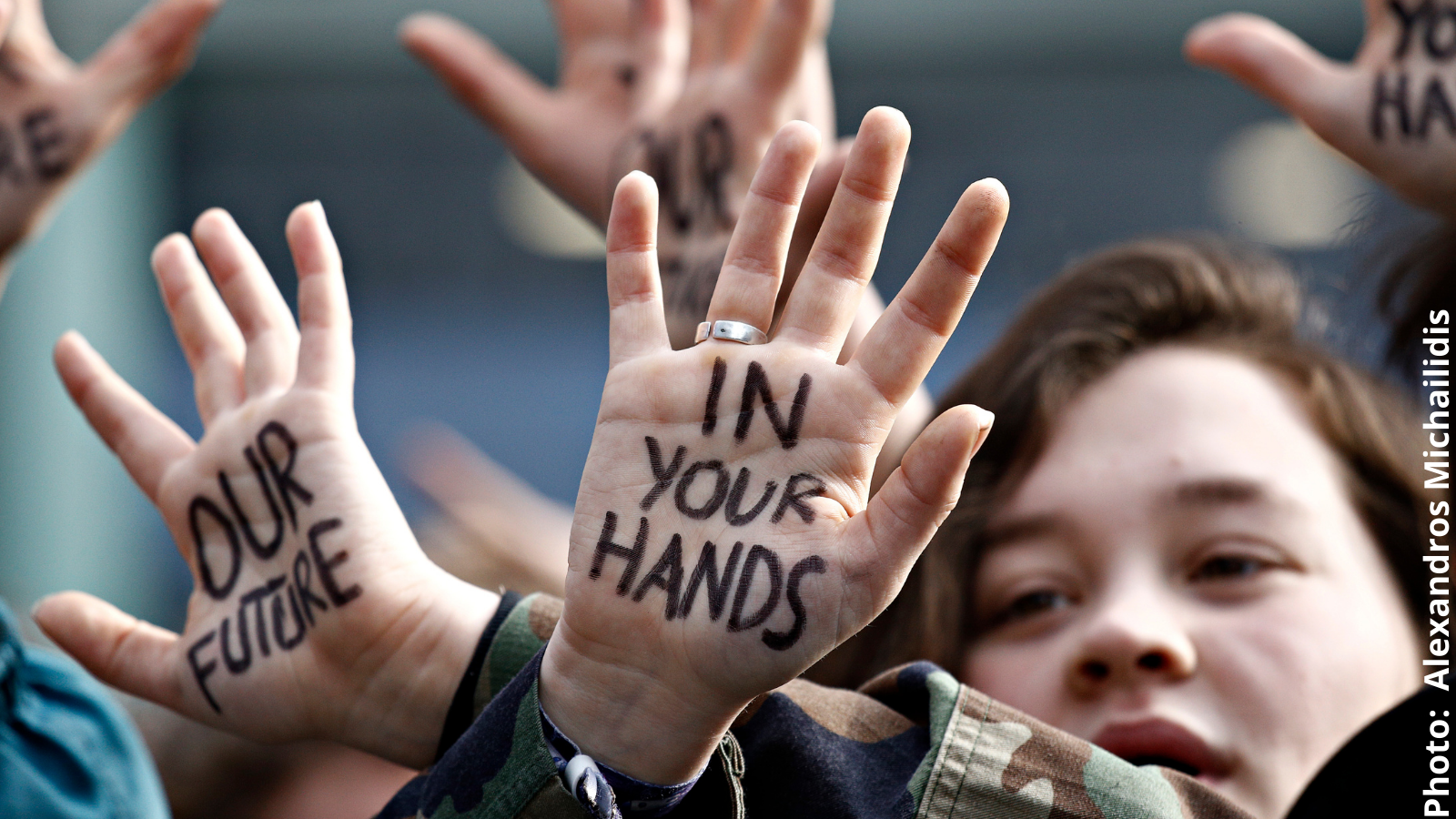 The Scottish Parliament election is fast approaching on May 6.

Late last year, we outlined our priorities for Holyrood now and beyond polling day to help build a world without poverty – one in which everyone’s basic needs are met within safe environmental limits.

We believe the pandemic has created an historic moment for change: the choices we make – to break with the past or to reinforce the old ways − will be with us for generations.

In our paper, Care, Climate and Covid-19: Building a Wellbeing Economy for Scotland, we identified four key areas for action by the Scottish Parliament using devolved powers:

As we recover from COVID-19, a key focus is the need for action to better value and invest in care, and all those who provide it. Right now, too many people live in poverty because they look after someone.

We’re also calling for faster action on the climate crisis, including doing significantly more to deliver climate justice for those already impacted by a crisis we have helped create, and continue to make worse.

We’ve worked hard to promote our recommendations and we are hugely grateful to our supporters in Scotland for writing to the leaders of all the main parties at Holyrood to urge them to implement them.

The main parties have now issued their manifestos.

We’ve read each manifesto in relation to our policy recommendations and we’re encouraged by some of the pledges made. Below we highlight some of the key commitments made in writing and verbally, but we also provide direct links to each manifesto for full details.

With your help, we will continue to push for action to tackle poverty and the climate crisis in the next Scottish Parliament. Thank you.

On care, the Scottish Conservatives have verbally committed to looking again at the National Performance Framework and to give “serious consideration” to a new National Outcome on valuing and investing in care, and those who provide it. The party’s manifesto says they would address the “historic underfunding of the sector” and backs the introduction of national employment conditions for care workers.

For unpaid carers, they pledge to improve the Carers Allowance, with a new taper rate so that carers do not lose 100% of their allowance if they earn £1 over the £128 per week limit on earnings. They say they would provide dedicated employability services to support carers into work. The party commits to completing the rollout of the Scottish Child Payment and to increasing payments to £20 per week by the end of the Parliament. It says it would introduce free wraparound childcare for children in Primary 1-3, equivalent to five hours a week.

On climate change, the party commits to supporting businesses to reduce emissions and to bringing forward a Circular Economy Bill to set new targets for reducing our raw material usage. The party pledges that public procurement will be used to “incentivise the delivery of our environmental targets and enhance our circular economy”. The party promises “a green recovery, where every job is a green job”, adding that we “need to deliver a wholly renewable powered Scotland”.

It has also pledges to support the continuation of the Scottish Government’s £10 million International Development Fund and the long-standing Scotland Malawi Partnership.

The Scottish Greens promise a 1% annual wealth tax for millionaires and to examine the feasibility of a Scottish Minimum Income, with social security top-up powers used to increase the incomes of anyone living below this level. The party says it will make access to sustainable, affordable and healthy food a key indicator for the National Performance Framework while making public procurement and access to Scottish Government support conditional on compliance with Fair Work standards. It says it would replace the Council Tax.

On care, the Scottish Greens have verbally voiced support for the creation of a new National Outcome on valuing and investing in care, and those who provide it. In addition, they support: social care workers being paid at least £15 an hour; a review of Carer’s Assistance – including a lower caring hours threshold and more flexible earnings limit; an immediate increase in the Carer’s Allowance top-up to £105 a week; and they commit to examining the feasibility of providing an extra payment to those caring for more than one person. They say they would ensure unpaid carers have access to training, equipment and respite breaks.

They promise to accelerate the roll-out of the Scottish Child Payment and would double the value of the entitlement to at least £20 per week.

On climate, the Scottish Greens pledge to: replace air passenger duty with a frequent flyer levy; make emission reductions and climate mitigation measures a compulsory requirement for all subsidies; and introduce a Human Rights (Scotland) Act to enshrine the right to “a healthy and safe environment”.

Scottish Labour pledges to introduce a Wellbeing and Sustainable Development Bill requiring the activities of public bodies to positively impact people and the environment in Scotland and low-income countries. It also commits to maintaining the International Development Programme.

On care, the party has verbally backed a new National Outcome on valuing and investing in care, and those who provide it. Its manifesto says it would designate childcare and social care as key growth sectors and increase care worker pay. For unpaid carers, it says it would increase Carer’s Allowance for full-time unpaid carers to create a Minimum Income Guarantee and extend eligibility to those caring for 20 hours or more each week. It pledges a Carers’ Employment Strategy. For low-income families, the party commits to increasing the Scottish Child Payment to £20 a week by the end of 2022 and to extend early learning and childcare, with an eventual ambition of offering 50 hours a week for every child.

Scottish Labour says it would require businesses accessing public money to meet work quality criteria, support those with caring responsibilities, and have a carbon reduction plan. The party commits to: enhancing the Scottish Welfare Fund; enshrining the Right to Food in law; and replacing the Council Tax with a fairer alternative.

On climate, the party commits to: an increase in the Climate Justice Fund; the introduction of a Circular Economy Bill; the creation of a statutory Just Transition Commission; and to maintaining funds for the Development Education Centres in support of global citizenship education.

The Scottish Liberal Democrats commit to the introduction of a new Wellbeing and Sustainable Development Bill to make it a statutory requirement for public bodies to take full account of the sustainable development impact of their decisions. They say they would introduce a new Bill to create a right to food in Scotland and would overhaul public sector procurement policies, including to promote fairer work and the circular economy.

On care, the party says it would enforce new fair work requirements. It has promised to: enhance Carers Allowance in Scotland; make it easier financially for carers to access education and training with guaranteed respite; and support those who want to continue in employment. For low-income families, the party says it will double the Scottish Child Payment to help achieve Scotland’s child poverty targets and pledges to expand childcare, initially from the age of 2.

The party pledges to replace the “unfair” Council Tax and to create a right to food, with cross-government work to end the need for food banks. It says it will increase the provision of free meals to all primary school children in Scotland.

On climate change, the party promises to: ensure net zero carbon and nature recovery objectives are built into decision-making; repurpose economic activity towards climate friendly industry; reward rapid progress and encourage behavioural change; and introduce a new Energy Efficiency and Zero Carbon Bill. It commits to increasing the capacity of schools to teach about the climate emergency.

The SNP promise to introduce a Wellbeing and Sustainable Development Bill to make all public bodies and local authorities consider the sustainable development impact of their decisions. It would increase the International Development Fund to £15 million and to support the Humanitarian Emergency Fund.

On care, it promises a 25% funding boost for social care as part of a new National Care Service and introduce “a new fair, National Wage for Care staff”. For unpaid carers, it pledges to develop economic measures to take “proper account” of their contribution and to replace Carers Allowance with a higher value payment called Carer’s Assistance. The party promises to double the Scottish Child Payment to £20 per child per week by the end of the Parliament and a new four year, £50m child poverty plan. It pledges to apply flexible and family friendly working criteria to public contracts and grants and to nearly doubling investment in employability support for low-income and disabled parents.

It says it would: continue to create a wellbeing economy; enshrine the Right to Food in law; guarantee the Scottish Welfare Fund; work on a Minimum Income Guarantee; and make the Council Tax fairer.

On climate, it pledges to double the Climate Justice Fund and to publish an indicative National Determined Contribution (climate change plan) focused on cutting emissions by 75% by 2030. It also says it will: deliver a “green transport revolution”, invest in the decarbonisation of the heating for homes and buildings; and invest in a £100m Green Jobs Fund.

It’s still not too late for all parties to make new commitments to help tackle poverty and the climate crisis before polling day. You can find about all of the parties and candidates standing in your area by clicking here.